The Queen of the Mississippi meets Mr. Blue 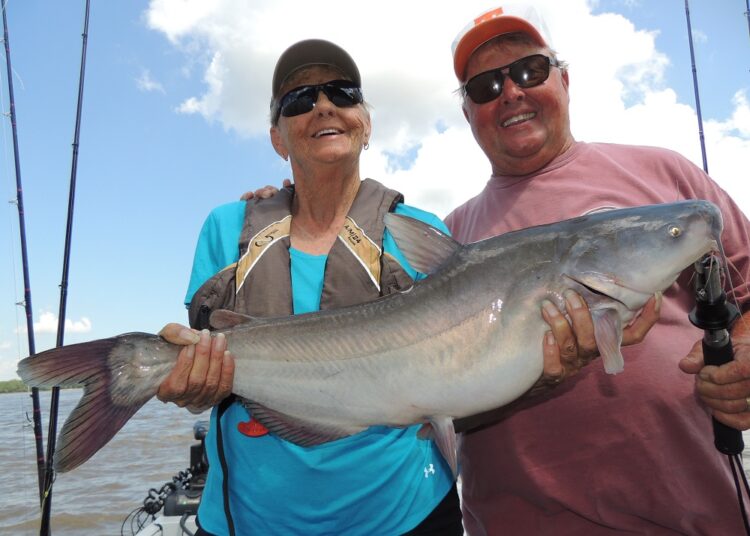 It seemed like an innocent question. I am trying to remember who, but I think it was Lyle Stokes on a Catfish Weekly broadcast that asked Vicky Mathenia an all-important question. “If you could fish with anyone you wanted, other than Jason, who would it be?”

For those of you that don’t know, Vickie is one-half of a highly popular and successful mother/son catfishing team. The other half is Jason “Big Cat” Mathenia. They have been fishing the catfish trails together for about nine years. “She is my right hand when mine is full,” says Jason. “She knows what I am thinking without speaking a word and vice versa. We both have the same passion and drive. She’s smarter. I’m stronger.”

Now, getting back to the question asked of Vickie. She quickly responded, “Bill Dance.” It turns out that Vicky and her dad had a regular date with Bill Dance every Saturday morning. She has been a fan of Dance for a long time because of that experience with her dad.

Her answer started the wheels turning behind the scenes and led conspirators to the Mississippi River Monsters catfish tournament. A simple request to tournament director George Young Jr. to make the trip with Dance happen was culminated on September 7, 2016 when Vickie met up with Dance and Young at the marina on Mud Island, in Memphis.

The only goal of the morning was to take Vicky fishing with Bill Dance. I had the great pleasure to accompany the group on the Mighty Mississippi in search of what Young likes to call “Ole Mr. Whiskers.”

It was not that great a bite, but the conversation, the jokes and the camaraderie were beyond exceptional. You just don’t spend time on the boat with Bill Dance without having fun. What a great way to spend a morning with some great members of the catfishing family.

It was quickly evident that Vickie knew her way around a bumping rod. It happened to be a Blackhorse Custom Rod built by Lyle Stokes. It is her favorite. Jason takes credit for teaching his mom to bump, and a good job he did. When Vickie asked Young for a weight for her rig he said she could get by with a 4 ounce. She said, “Give me a three.” She then proceeded to bounce a piece of skipjack far behind the boat.

When stronger current was encountered she ask Young for a 4 ounce, knowing exactly what she needed for the conditions she was fishing. It was a slower bite than anyone likes, but Vickie still stole the show by catching a nice 14-pound Mississippi River blue cat. That fish came from what seemed like 2 miles behind the boat. A great testament to her ability to bottom bounce.

Dance’s affection for catfish is not known by everyone because of his bass fishing background. However, the fact that he lives near Memphis, and loves to catch blue catfish, his friends have tagged him with a nickname.

“My catfishing friends call me Mr. Blue,” reported Dance. “I’m fishing for big blue catfish on the Mississippi River in the shadow of the Memphis Bluffs. Those bluffs are only a couple of miles from Beale Street, which is known for another kind of blues.”

Vickie also has a not so well known, but applicable, moniker. She was tagged with it by Lyle Stokes when he was describing the mother/son catfishing team.

“Jason relies heavily on Vicky,” said Stokes. “She works as hard or harder, than anyone else. They have both put giant fish in the boat and if either tells you something about catfishing, you better be all ears. I am pretty sure Vicky won’t stop fishing until she has to. After all she just might be the “Queen of the Mississippi.”

So there you have it. To me it is just one more example of why the sport of catfishing is growing and will continue to grow. It won’t be because of naysayers or dirt slingers. It will be because of good people with big hearts that love their sport and want to see it have positive growth. Beyond that they have a natural bond to others that cat fish and are willing to go out of their way to help them, surprise them, praise them and support them.

And that is the story of how the Queen of the Mississippi met Mr. Blue.