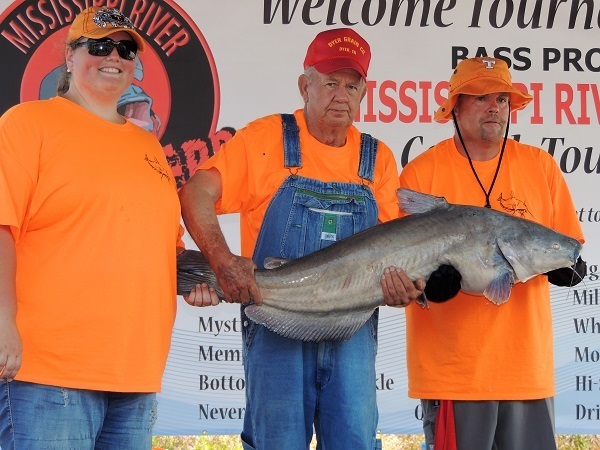 How big will they be? That is the only question remaining this Saturday morning Sept. 10, 2016 where more than 180 boats and nearly 400 anglers launched from Mud Island into the Mississippi River. The challenge of the Mississippi River, a quest for trophy catfish and the possibility of winning a first place prize worth $14,000 in cash drew the competitors to Memphis for the one-day event.

The occasion was the inaugural Mississippi River Monsters catfish tournament. Organizer George Young Jr. and his tournament volunteers hope it will be the first of many tournaments to shine a light on the great fishing out of Memphis.

“It was over a year ago when George asked me if it would be possible to hold a big catfish tournament out of Memphis,” said tournament supporter Bill Dance at the mandatory captains meeting.“

Dance was speaking to an overflow crowd in the Ducks Unlimited Room at the Bass Pro Shops at the Pyramid in Memphis. “I told him he could do if he put his mind to it, and look at the proof in this room,” continued Dance as he pointed across the crowded room.

Dance welcomed the anglers and wished them good luck before Jody Harrison (FishLife) introduced himself as the weigh master for the next day’s event. Harrison went over the rules and called on tournament director George Young Jr. to answer any remaining questions the anglers had.

Young then gave detailed instructions for accomplishing the launch of 184 boats. The process began at 3:00 am and all boats were in the water by about 6:00 am. The whole launch process went pretty smoothly. Fishing began at 7:00 am and the scales were scheduled to open at 10:00 for anyone catching a fish and wanting to weigh it early. The first call came in to Young a little before 10:00.

The FishLife scales remain open all day, but most of the weigh-in activity will come from about 3:00 pm until all the boats have completed the process. The public is invited and welcome at the weigh-in on Saturday, Sept. 10, 2016 at the south entrance to the Bass Pro Shops at the Pyramid. It should be exciting with plenty of big fish coming to the scales.