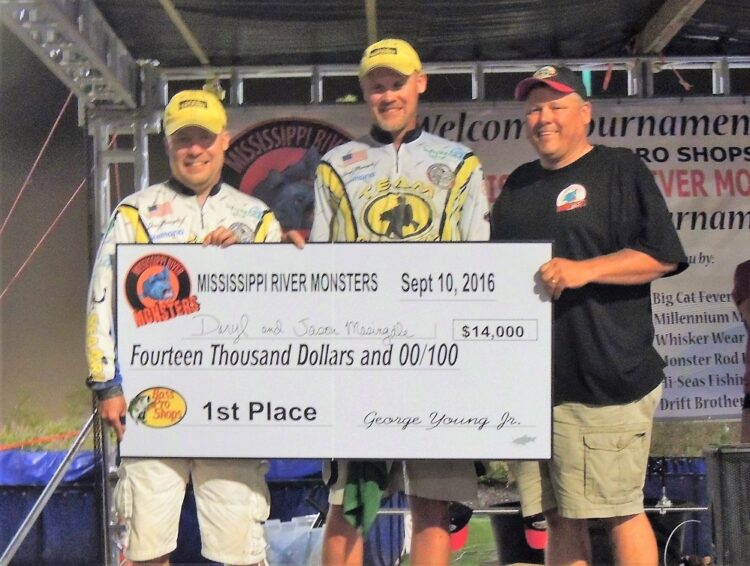 The festive event, produced by George Young Jr., attracted 184 catfish teams to ply their fishing skills on the Big Muddy. It all culminated in a large parking lot at the south entrance to the Bass Pro shops at the Pyramid.

Weighmaster, Jody Harrison brought his FishLife stage and electronic scales to Memphis to conduct the weigh-in. At the end of the day it was the 151-pound bag of Masingale Catfishing the took the top prize of $14,000 in cash plus bonuses.

Jason Masingale and his brother Daryl were excited and proud of their win. “Oh my,” said Jason. “We have won the inaugural Mississippi River Monsters tournament, right here in the shadow of the Bass Pro Shops Pyramid.”

“We fished hard today,” continued Jason. “There were 184 boats fishing this thing, and a lot of them came down a week ahead of time to prefish. Some of the teams ran a long way and some of the teams stayed close. We decided to maximize our time with baits in the water, so we stayed close.”

“We tried to fish places that people don’t normally fish. You can go to a certain spot and everybody knows how to fish it and where to fish it. We tried to get out away from it a hundred yards, or something. Just tried to look for the out of the way spots is what we did.”

“We didn’t catch a whole lot of fish,” continued Jason. “We caught good fish. We just kind of ground it out fishing hard all day.”

“This one was special,” offered Jason. “I was talking to a guy that was kind of new to catfishing and I asked him, ‘do you have any idea the caliber of the talent that is here?’ A lot of the guys that were the first to tournament fish were here. I told Daryl, that if we could pull off a top 20 finish in this field that would actually be a notch in your belt, so to speak.”

“To win this tournament, I don’t think it has sunk in yet. Probably later on tonight, but it is just amazing,” concluded Jason.

The father/son team of Jackie and Johnathan Cooksey weighed 125.7 pounds of Mississippi River blue catfish to win the second place spot. They joined the Masingale team to play the bumping game. Tournament director George Young Jr. predicted before the tournament that bumping would be the major technique used in the tournament. “Anyone looking for trophy catfish on this river needs to know how to bump,” said Young.

“We caught em’ bumping,” reported Jonathan Cooksey. “We caught fish at different depths, but mostly deep. Everything we caught was over 50 feet deep. We caught some of them down to 100 feet too. We used skipjack for bait.”

“Today was a very, very tough day,” reported the Bottom Dwellers Tackle prostaffer. “We only boated six fish, but it was six of the right ones. We culled one 25 pounder and had a few more bites that we didn’t hook up with. Most everything came on double hook rigs. We were using large baits to target large fish.”

“This is the biggest catfish tournament ever, I think,” continued Jonathan. “To finish second in this inaugural event of the Mississippi River Monsters is an accomplishment. We are proud and blessed. It takes a little luck to get second with all the great folks fishing here today.”

It was a family affair at Mississippi River Monsters with first place going to a team of brothers and second to a father son team. Third place went to another team of brothers.

Zed and Josh Moore claimed the third place spot with 116.7 pounds. “We started out fishing revetment banks,” said Zed. “We had a pretty good ledge there, about 80 feet out in the channel and a 45-foot-deep ledge. We just stayed on that revetment bank for most of the morning.”

“We went upriver and took a couple passes at some sand flats. We finished the day back on the revetment banks. We were bumping the whole day, using skipjack for bait.”

“This was an awfully big event,” added Zed. “Not only that, but it probably had the most famous catfishers in competition. There was nothing but legends around here. It was awesome.”

“It was great to see Bill Dance and I appreciate everything George Young did,” chimed in Josh. “It was a tough day of fishing, but we like to bottom bounce, even back home on the Ohio River. It was fun to come to the Mississippi and try our techniques down here.”

The brothers agreed that the Mississippi River fishes different. “The current speed and depth of the channels – it’s just an awesome river,” said Zed. “It is a hard river to adjust too. We spent the first couple of days just making necessary adjustments. We had to figure out which weights to use. Just think about 100 foot of water going four miles per hour, that’s a pretty powerful river.”

“It was special just getting to fish against all these guys,” said Zed.

“We look up to everyone in this catfishing world,” added Josh. “Just to be out here fishing with some of the pros and the legends that we have watched their videos and their Youtubes, like Steve Douglas, is awesome. We are like kids in a candy store. We just enjoy being around everybody and talking to everybody.”

The big fish came to the scales early and left the Catbusters Team of Tim and Teresa Owenby, and Teresa’s dad Russel Richards, in waiting as the remaining competitors weighed their catches. In the end Richard’s 70.2 pounds carried the day. The big fish will move to the aquarium at Bass Pro Shops and Richard’s will receive a replica to document his big catch.

Mississippi River Monsters was a special event. Smiles, laughter and lively conversations filled the evening air as thoughts of catfish anglers focused on what to do different next year.

WhiskerWhackers and CatfishNow would like to congratulate the organizers, the staff, the sponsors and all the anglers on a groundbreaking achievement in the catfishing world.