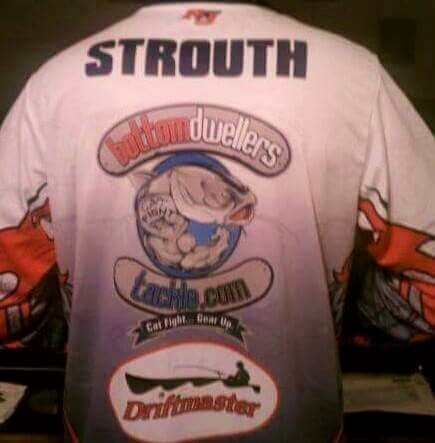 The catfish community is a tightly woven family of anglers with a common interest. They love catfishing and for the most part they love each other. When they lose one of their own to death the pain and grief spreads far and wide.

“He loved fishing just about more than anything.”

The year 2016 brought several losses to the catfish family. One was Paul Strouth. Paul was a quiet and thoughtful man with deep ties to the catfish community. One cat man that knew him well was his long time tournament partner, Anthony Robinette. They worked together as auto mechanic’s for years and fished together as friends.

“I have many, many memories of fishing with Paul over the years,” said Robinette. “We have been to many different places to fish. Sometimes we caught a lot and other times we caught nothing. We even sunk a boat once, but that didn’t stop us.”

“I think Paul will be remembered as a diehard fisherman,” continued Robinette. “He always wanted to be like his grandfather when it came to fishing. He would do whatever it took to get to the water and fish.”

“Paul was a great leader to me when it came to fishing,” revealed Robinette. “I learned a lot from him and looked up to him in this sport. I am sure many others did too. Paul got me into catfishing about 20 years ago and I hope to continue to do what he loved more than anything. He was very dedicated to catfishing.”

“Paul should be remembered as a legend in the sport,” continued Robinette. “If you never meet him you missed out on a great guy. If he taught you something about catfishing, then you could bank on it. He had a big heart and would always help others by showing them the right rig, the right setup, or the right bait. I have been fishing a couple times in the last couple weeks and I find myself asking ‘what would Paul do?’ That is how much I trusted him and believed in what he would say or do.”

He was like my brother that I never had,” concluded Robinette. “Fishing just won’t be the same for me.”

Paul Strouth proudly wore his Bottom Dwellers jersey at tournaments. “He was one of the first, if not the first, Bottom Dweller prostaffer,” offered David Ashby. “Paul was a guy that wanted everyone to be happy and get along with each other. He loved fishing just about more than anything. He simply lived to fish.”

Bottom Dwellers Tackle once held an online contest and the winner received an all-expenses paid trip with Ashby. Robinette won the contest and brought Paul along as his guest. “Once we all managed to get our schedules worked out we set out to fish the James River,” said Ashby.

“We were fortunate to boat a lot of really quality fish that weekend,” recalled Ashby. “We managed to set multiple personal bests for Anthony and Paul.  Paul’s PB held up until Winter Blues on Wheeler, 2016. Beating his PB couldn’t have come at a better time. His new PB helped push his team into the top spot for the tournament. I was very proud and happy for him and glad I was there when he did it. Paul was very proud, but as always, humble.”

As part of the JKV Catfish Trail, Josh Vanover, tournament director, has named their first event in 2017 after Paul Strouth. “Paul was a good friend of mine,” said Vanover. “The January 28, 2016 JKV event on Wheeler will be in remembrance of Paul Strouth. Mr. Wheeler himself.”
“We gave him that nickname at last year’s Winter Blues on Wheeler,” offered Vanover. “He spanked us all. He took home the money and only fished 200 yards from the boat ramp. We are pleased to be remembering one of our own from the catfishing community.”
Tammy Strouth and Brian Lawson, Paul’s teammates at Winter Blues last year, are expected to compete in the tournament, although on separate teams. “We will be taking an offering to further support the Strouth family,” concluded Vanover. “Following weigh-in we will present Tammy with a plaque to commemorate Paul’s passing.”

“There is no doubt that Paul left an impact on the sport of catfishing,” continued Ashby. “On a personal level, Paul left a void for those of us that knew him. I hope and pray that void, now felt by myself and many others, will be replaced with cherished memories. It is a very emotional thing to deal with, knowing there will be no more fishing trips or stories to be made with Paul.”

Paul teamed up with his wife Tammy and Brian Lawson to win the 2016 Winter Blues on Wheeler. “Paul is such an inspiration to me,” said Lawson. “He gave me back the passion and love to fish that I lost when my grandfather passed. I’ll forever be grateful to have been able to call Paul a friend and brother.”

“I would like Paul to be remembered for his legacy,” offered Lawson. “He loved to compete, but he would give up information just to help a friend, or someone just getting into the sport. We fished several tournaments in 2014 and 2015 and planned to make the three of us a permanent team in 2016. I miss having him around to talk to and fish with. I think I have fished three times since he passed. It just doesn’t feel the same. My plans are to travel to Alabama and try for back to back wins in his name.”

“He was a guy that would give you whatever you needed,” said Lawson. “Just because Paul isn’t here physically, he’s in our hearts. Every time we blast off in a tournament or just to fish, we should remember that Paul is with us.”

Chuck Davidson remembers Paul as a true friend and catfish brother. “I called him the Mad Catfish Scientist,” declared Davidson. “The ideas that he would bring to my attention and the independent studies he would do were all very interesting. He experimented a lot with all sorts of trophy catfish tactics. I never would have even tried some of the things that he was doing to consistently put exceptional fish in the boat.”

“He was an Innovator,” said Davidson. “He was always trying to figure out where fish were under all different water and weather conditions, during every part of the year. He figured them out on Wheeler. He knew the biggins’ were feeding shallow and he was there waiting for them. That’s exactly how he won Winter Blues. I really miss being able to pick up the phone and talk everything catfishing with him.”

Even those who did not know him well were quick to praise his demeanor and catfish savvy. “I met Paul a couple of years ago,” said David Shipman. “It was a very brief encounter. Then I got to talk to him a lot at Winter Blues on Wheeler in 2016. He left a great impression on me. He was a very humble man, even after winning Winter Blues. Since then we talked again at a meeting about catfishing up near Nashville. Once again he struck me as a humble and knowledgeable person. I believe we would have become closer friends if his life had not been cut short.”

Catfish anglers responded in many ways to Paul’s death. Larry Muse, after winning a tournament in Missouri, was moved by respect to remember his tournament competitor. “I would just like to dedicate this win to Paul,” said Muse. “Paul Strouth will be missed.”

Paul’s passing had a huge portion of the catfish community in mourning. Many changed their Facebook profile photos to a shot of Paul as a way to remember him. Many of those photos are still posted in his memory.

Tammy and the family have been through a lot over the past few months, but have been touched by the caring of the catfish community. “It’s very hard,” said Tammy. “I still have bad days. The catfish family came together for me and gave me support. People I knew that were very competitive and trying to beat us in tournaments were there for us when we needed them. Some of them I had known for years, but only met them during the tournaments.”

She named several friends that were there from the start of her ordeal. “Steve and Lisa Douglas were really there for me,” offered Tammy. “Steve started the GoFundMe page, and it really helped out. Ray Ferguson was another one. He was always competitive and talking about beating us, but he was there when the tragedy struck. There were so many, Chris Vittetoe was another.”

“People were wonderful to me,” said Tammy. “I couldn’t ask for a better family. They came together, they called, they prayed and they checked on me.”

Paul had touched a lot of people with his catfishing. “I can’t thank them all,” lamented Tammy. “Larry and Joyce Muse, Ken Freeman, and Shad Daddy all checked on me and there were many others.”

It has been about four months since the accident. Tammy reports that she has gone back to work and is getting her feet on the ground again.

“I think about Paul every day,” concluded Tammy. “I want to strongly express, that even though people are competitive and fishing against each other, when it comes down to tragedy you realize who your friends are. The catfishing community came together for me. I cannot thank them enough. That is what you call family.”