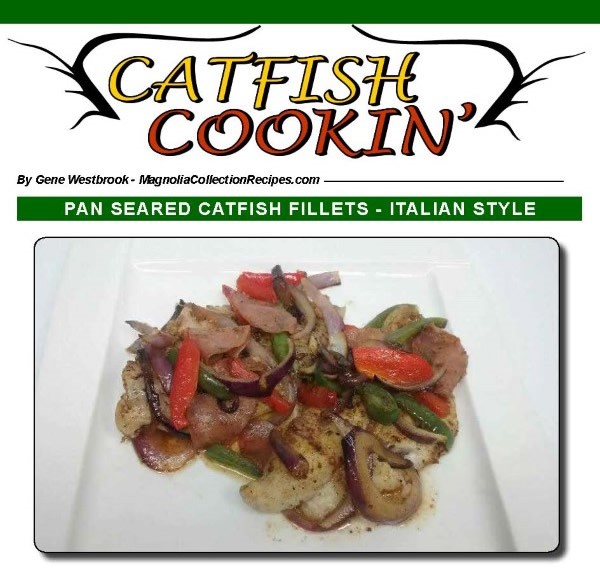 Juice of ½ of a fresh lemon

½ small green bell pepper; cut into strips, then cut in half again

½ medium red bell pepper; cut into strips, then cut in half again

Wash the fish fillets; then drain and pat dry with paper towels.  When dry, sprinkle both sides of the fish with salt and pepper.

Slowly begin heating the butter in an iron or other heavy skillet, then add the garlic halves and smash them.  When the butter is melted raise the cooking temperature to medium high.  Just as the butter begins to brown, quickly add the catfish fillets and squeeze ½ of the lemon half over both fillets.  Lower the temperature to medium and cook, uncovered, for 5 minutes.  Use a large spatula to turn the catfish fillets to the other side and squeeze the remaining lemon juice evenly over the fillets.  Cook another 5 minutes; then slide the partially cooked fish onto a large platter and set aside.

Keep the skillet cooking and remove and discard the 2 cooked garlic pods.  Add the onion slices, both green and red pepper slices, and the salami half-slices to the still cooking skillet.  Stir and cook the mixture until slightly wilted, then salt to taste.

Slide the partially cooked fish fillets back into the skillet with the onion, pepper, and salami mixture and continue to gently cook (do not break-up the catfish fillets) for about 10 minutes longer.  Turn the fish fillets with a spatula once during this final cooking time.

To serve, place the cooked catfish fillets on a platter, then use a slotted spoon to place one-half of the onion, pepper, and salami mixture on top of each catfish fillet.  Serve with lemon wedges on the side.