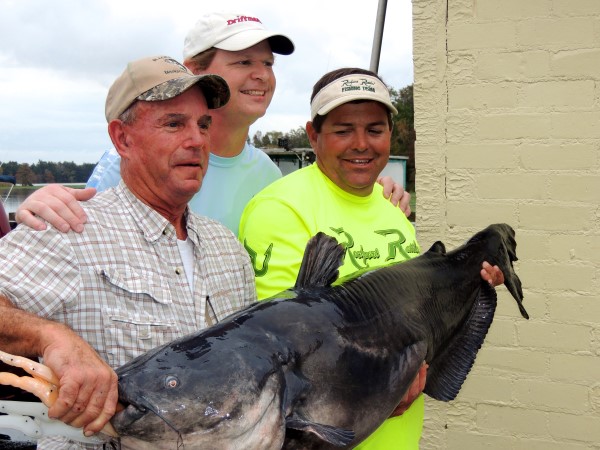 This month’s cover photo shows a big Santee Cooper blue cat caught by Brian Cope while fishing with Capt. Gene Crawford out of Black’s Camp in South Carolina. Cope’s fishing partners for the day were Jeffrey Burleson and Stacy Atkinson. Like so many other big fish catches, the story behind its landing is more than the photo depicts.

“We were dragging a Carolina rig baited with cut mullet,” recalled Cope. “The captain had two or three parachutes out to slow the drift. It was overcast and raining lightly when the rod doubled over in the rod holder and I got to it first.”

“I thought we might be in trouble when Capt. Gene first saw the fish on the surface,” said Cope. “He hesitated to net the fish, saying, ‘it’s not going to fit,’ and the fish made another run. Once back on the surface, Capt. Gene got enough of it in the net that we managed to hoist it aboard.”

“As soon as the fish was on the boat, Capt. Gene immediately let out a celebratory whoop,” revealed Cope. “Then he high-fived us all. Once I told him I wanted to release it, he went to work keeping the fish nice and calm and wet. We headed back to the landing to put the fish in a holding tank to help revive it.”

The 76-pound blue cat hit in around 45 feet of water and took about 15 or 20 minutes to land. “While I was fighting the fish, another rod doubled over,” said Cope. “We didn’t worry about that rod until my fish was in. Then Burleson picked up the second rod and reeled in a 35-pound blue. He didn’t even get a high-five for it with the 76-pounder on board, but once back at the landing, everyone commented on what a nice fish the 35 pounder was.”