Catfishing on the Mighty Mo 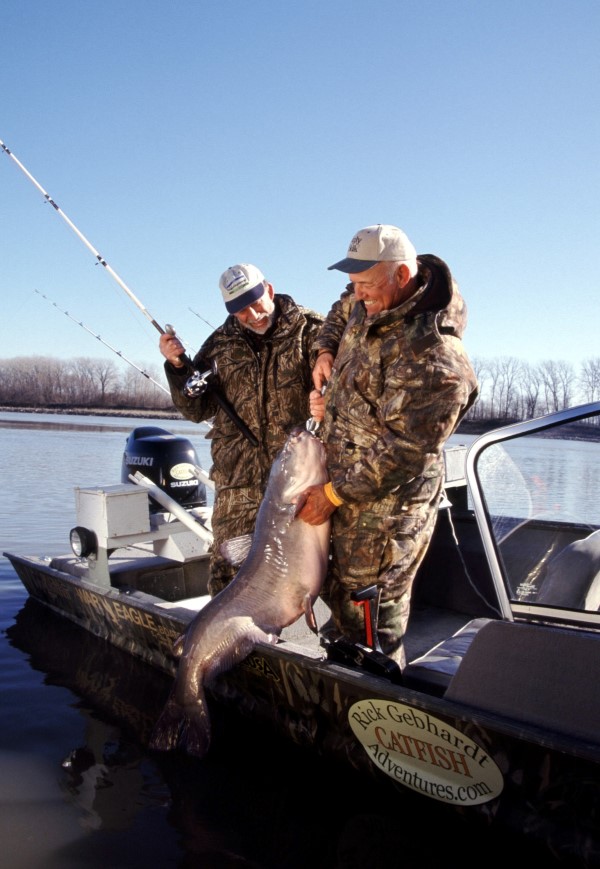 Sometimes you’re lucky enough to accidentally hook a blue cat where it shouldn’t be hooked. Behind the dorsal fin, for example, which is where my 27-year-old son Josh Sutton hooked his first Missouri River blue.

It happened while we were fishing the Missouri River near Glasgow, Missouri, with veteran catfishing expert Rick Gebhardt. Rick baited three rigs with small chunks of shad, cast them near a riprapped bank and then placed the three poles in holders at the rear of his party barge. My sons Josh and Matt, both eager to tangle with one of the Mighty Mo’s gargantuan catfish, had just gotten comfortable in their chairs after debating who would grab which pole. Suddenly, Pole Number One—Josh’s by decision—made a nosedive.

Josh snatched the rod hard, burying the hook and infuriating the fish in which he buried it. Josh is no slouch when it comes to battling big fish, but this one made him groan. “Geeeez!” he exclaimed. “This thing feels huge!”

As we watched Josh struggle with his whiskered opponent, Rick and I agreed it could be a hefty cat, perhaps over 50 pounds. Josh had a hard time gaining line. He’d take one yard and the cat would take two.

On this day, however, the catfish didn’t stand a chance. Josh was dogged in his determination, and after a lengthy battle, he managed to bring the blue cat close enough for Rick to net it.

The catfish was beautiful—fat, healthy and well-muscled, with hardly a blemish on its smooth gray skin. Instead of the 50-pound-plus fish we expected, however, Josh’s trophy weighed an even 32 pounds.

“Sometime during the fight the hook came loose and snagged him behind the dorsal fin,” Rick said. “No wonder he put up such a fight.”

Josh released his trophy back into the river. Matt now had that look on his face—the look of an angler who’s just seen a giant fish landed and figures there’s no way another one as big could possibly be landed the same day.

To his delight, however, that was not the case. Just a short time later, Matt buried the hook in a trophy of his own. This cat wasn’t foul-hooked like Josh’s, but it had all the fight my 20-year-old son could handle. The big blue cat led Matt from one side of the boat to the other as it tried to throw the hook. But Matt was not about to be outdone by his older brother. He leaned back hard on the rod and gave the fish the fight of its life. And soon he had the fat cat close enough to net.

I don’t suppose I’ve ever seen a bigger smile on Matt’s face. The pressure was off. The cat was in the boat. And it was a near-twin to Josh’s—31 pounds on Rick’s scale, and the biggest fish to date Matt has landed.

I didn’t fish that day, but it was, for me, a perfect outing. Josh and Matt both got the trophy they’ve long dreamed of. And they landed between them around 100 more pounds of smaller cats during the course of our Mighty Mo adventure. Watching them enjoy the fantastic fishing opportunities available on this incredible river made me as happy as a father can be.

The experience just described exemplifies the superb catfishing opportunities available in the Missouri portion of the Missouri River. Trophy blue cats are common, including world-record class fish. Flatheads from 30 to 50 pounds and more surface with astounding regularity. Fishing for the river’s abundant channel cats is excellent as well.

Crossing the mid-section of the state from Kansas City to just north of St. Louis, this huge tributary of the Mississippi provides ideal conditions for growing lots of big catfish, and winter may be the best season for catching them.

In 1992, Missouri and other states bordering the river banned commercial fishing to increase the number and size of catfish. The plan worked. Catfish size and abundance rose significantly, and the catfishing success rate has more than doubled since then.

Sport fishermen also release catfish at a rate almost double that seen before the ban. This, too, enhanced the river’s ability to produce big blues. Missouri’s pole-and-line state-record, a 130-pounder, was caught in the river in St. Louis County in 2011, and in March 2015, a trotliner in Saline County caught a 120-1/2-pound monster. Even bigger specimens could lurk in these waters.

Catching winter cats isn’t always easy, however. You need a polar bear’s constitution to persist in the Arctic conditions prevalent this season, and you need fresh fish baits like shad to tempt the monsters—not an easy thing to come by in sub-freezing temperatures. If you possess the wherewithal to try, though, this is the time of year you’re most likely to land the blue cat of a lifetime. Wing dikes in the river provide some of the best fishing holes, particularly those with low spots where additional food washes into deeper water below the dike.

Missouri River flatheads usually are caught on live fish baits near woody cover, around dikes or along riprapped banks. Rigs baited with cut shad, live goldfish or live sunfish are especially effective near the ends of wing dikes in fast-moving water. Look for areas where large rocks in the water deflect the current to provide good resting and feeding areas.

Channel catfish are also abundant in the Missouri. They provide good fishing opportunities on live, cut or prepared baits in slower water. Try fishing near sand bars, cut banks, along revetted shorelines or below wing dikes. Many successful anglers fish on the bottom with night crawlers and a heavy sinker (1 ounce or larger). Other channel cat baits popular with local fishermen include chicken liver, shrimp and cut shad.

Before another year passes, my sons and I will probably make another foray up to the Missouri. Josh and Matt, like most fishing enthusiasts their age, are obsessed with catching big, hard-fighting fish, and having discovered the Missouri’s riches firsthand, they’re eager to try again for another trophy whiskerfish in the Mighty Mo.

Could they score another double on trophy-class blues? If Rick Gebhardt is their guide and the Missouri is the river, I’d say the chances are excellent.

Gear/What to Take
Small boats are out of place on most portions of the Missouri River in Missouri. It’s best to fish from big stable craft such as wide-bottom johnboats or bassing rigs. A 25-hp motor should be considered minimum for powering up in these swift waters.
Other gear worth considering: a lantern for night fishing, an aerated live-bait tank, a heavy-duty stringer for “kept” catfish, a big sturdy landing net and a camera to snap photos of the big ones that didn’t get away.