Catfish Basics #010 – Bait is Where You Find It – Kris Flores 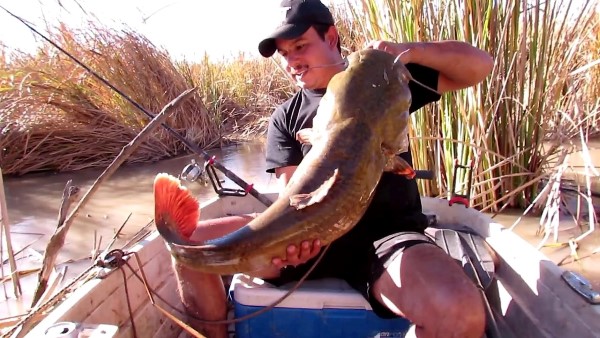 Millions of anglers chase after the whiskered catfish for the same reason. “I like fishing for catfish because of their size and brute strength,” declared Kris Flores, a catfish angler out of New Mexico and proprietor of Muddy River Catfishing. “There aren’t too many fish in North America that can get up into the 100-pound range and fishing for a fish that could potentially be that big is exhilarating!”

Smell is extremely important when fishing for catfish. “The catfish’s body is covered with hundreds of chemoreceptors (just a fancy word for taste buds),” explains Flores. “These taste buds give catfish the ability to taste the water around it or your bait, just by nudging it with its tail. The scent is one of the key elements in luring a catfish to your bait.”

Flores has to adapt his catfishing addiction to his location. “I like using cut bait, because it is easier to obtain than live bait,” stated Flores. “In the state of New Mexico it is illegal to transport live fish from one body of water to another and catching live bluegill as bait is hit or miss. I can catch some bluegill or carp before a fishing trip, put them in the freezer, and forget about them until I need them again.”

Flores typically cuts the baitfish into sections. “I make one cut behind the head from top to bottom and again every 1 to 2 inches down the body,” explained Flores. “I hook the head from underneath the jaw and out the top through the bone between the eyes. This helps keep the hook from hooking back into the bait. The body pieces I’ll hook from the top, being sure to get enough meat on the hook to keep it on, yet leaving plenty of gap on the hook so it can do its job.”

“I’ve noticed that I catch just as many flatheads, blues and channels on frozen cut bait as I do on live bait. I know many anglers would argue that, but this is just from my experience in my area.”