Getting the Drift of Catfishing 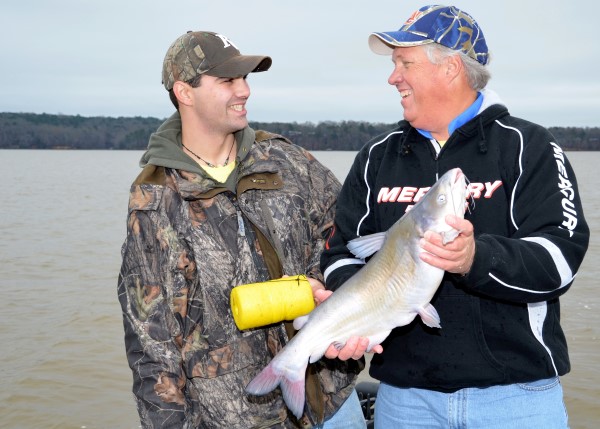 Float lines can load a boat with fish for little cost

The 20-ounce sport drink bottle tipped and bobbed incessantly before creating a v-shaped wake in the opposite direction as we approached it. Frequently, the bottle disappeared beneath the surface for long periods, only to pop up again 30 to 40 yards away.

“Something big is on that line,” remarked Jack Tibbs, who frequently runs jug lines on Lake Eufaula along the Alabama-Georgia line. “Get the pole around that line and let’s see what’s under that bottle.”

Daniel Felsher snatched the taunt line with a pick-up stick and pulled the rig toward the boat. When he grabbed the line and yanked it up, the enraged, submerged beast plunged for the depths, almost talking Daniel with it. He began battling the creature in hand-to-fin combat until finally hauling a big blue catfish to the surface where Jack could net it.

Anglers “gone jugging” can often fill a boat quickly with catfish without spending too much money. Called jugging, jug lining or float fishing, this sport essentially consists of suspending baited lines from floats and setting them adrift. People can use just about anything that floats. Many anglers keep empty milk jugs or drink bottles to use as floats. Others cut inexpensive foam “pool noodles” into sections. Noodles became so popular that many people now call the sport “noodling,” not to be confused with hand-grabbing catfish. Regardless of the float type, fishing like this offers incredible fun that can quickly fill a freezer with great fillets.

“Jugging is a great way to put a lot of catfish in the boat,” explained Don Caldwell, an avid jugger from Lake Charles, La. “I’ve fished catfish all kinds of ways for years and jugging is the easiest and least expensive way to catch large numbers of fish. I’ll set out a line about a mile long with jugs 50 yards apart. When we get to the end, we turn around and start checking them again.”

Line length varies according to water depth. Ideally, anglers need to keep baits suspended near the bottom, but above entangling objects. Anglers may want to experiment with different depths to see what works that day. Tie a 3/0 to 5/0 stainless steel circle hook to the line. Where legal, some anglers rig multiple hooks. In deeper waters, many anglers attach weights to the lines to hold the bait near the bottom.

“I have jugs as shallow as six feet and some all the way down to 35 feet,” advised Brian Barton, a Tennessee River catfish guide (256-412-0969, www.brianbartonoutdoors.com) from Muscle Shoals, AL.

“I periodically change the line on my reels and use the old line to make jug sets,” reported Barton. “I like to use 85-pound test braided line. When fishing an area with a lot of snags, I might add a 14- to 17-pound monofilament leader so I can break it off if the line snags. In deeper water, I’ll use a 1/4-ounce split shot. When fishing heavy current, I might add a 1/2- to 3/4-ounce weight to keep the line vertical and the bait within three to five feet of the bottom.”

Bait the hooks and release the floats in a likely area. When a fish takes the bait and hooks itself, it moves the float. In a good area, anglers might not wait long for a bite. Usually, anglers work in teams. One person pulls up the line, especially with longer lines. Another person waits to net the fish. Ideally, a third person runs the boat. With only two people fishing, one drives while the other works the lines and nets the fish.

“Jug fishing is a great way to take kids fishing,” Barton explained. “Kids get really excited, because jugging usually involves a lot of action and we can put a bunch of fish in a cooler quickly.”

“Setting out a few float lines makes a great way to spend a day.”

Sometimes, fishermen set floats adrift and then go off a distance to watch for bobbing jugs through binoculars. Some sportsmen set out several floats and then go fishing for something else, returning periodically to check the lines. Others leave the jugs out overnight and run them in the morning.

Sportsmen can jug for catfish practically anywhere from small ponds and drainage ditches to massive reservoirs and major rivers. In large lakes, set floats in a wide circle, placing one about every 40 to 50 yards. With jugs arranged this way, anglers can simply run a continuous pattern. On rivers and streams, most people run the jugs one way and then turn around to run them in the other direction. In streams with strong current, look for oxbows, tributaries or other slack backwaters because flowing water can carry floats downstream rapidly.

“If I’m fishing in current, I usually won’t use more than 20 jugs because it’s easy to lose them,” Barton explained. “In a lake on a still day, I might fish as many as 100 jugs. Typically, I use about 50 to 60 jugs. Some people like when the wind moves their jugs, but I’ve had better success when the jug stays in one area so fish can find the bait. I like fishing around high bluff walls because they typically don’t have as many objects to snag and they block the wind.”

Many anglers catch their own bait by throwing cast nets. Big game hunters could keep organs from animals they kill to use for bait. Juggers might try several bait types and sizes to see what works best at that time and place.

“In the spring and fall, I prefer cut shad,” Barton recommended. “I also use minnows and whole shad. I like to use bluegills and other sunfish in the summer. I fillet a section about the size of a silver dollar. I might get more bites on chicken livers or shad guts, but frequently, small fish nibble off the bait. Shrimp is another favorite. Sometimes, I use live bait, particularly 4- to 5-inch long gizzard shad. Live bream is a particularly good bait for targeting flatheads around logjams. I’ve caught flatheads up to 45 pounds and hooked bigger fish.”

Not all states allow jug fishing, so check the regulations before turning floats adrift. However, where legal, jugging can quickly fill a freezer with fresh fillets. Besides, it’s just an incredibly fun experience for the entire family.