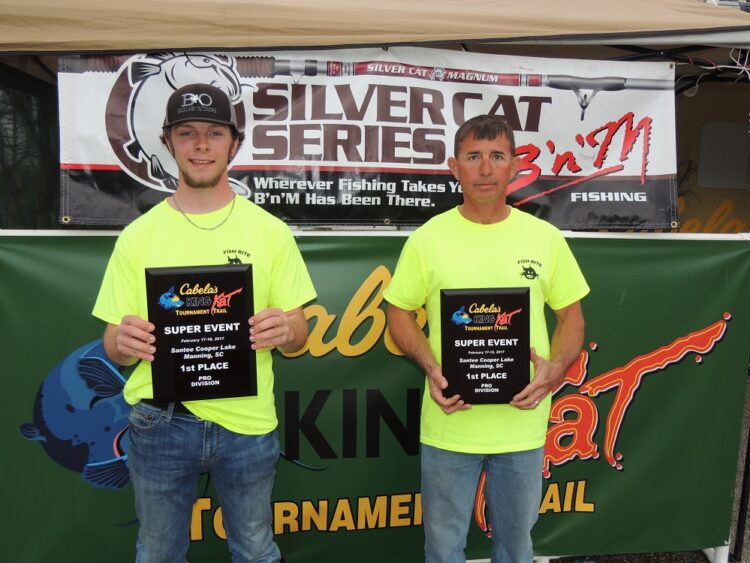 Catfish anglers were greeted with a beautiful sunrise and fair weather for the final day of Cabela’s King Kat Tournament Trail on Santee Cooper. The South Carolina lake is known for big catfish, and day one proved it so.

The team of Billy Patton and Dan Robison weighed in a 73-pound blue cat to claim the Big Kat honors on day-one. They added a 22.76 pounder to bring their total for the day to 95.76 pounds. Tournament rules allow 5 fish at weigh-in. Even with 3 fish their weight was good enough to put them in the top 10.

Richard Wimmer III and James Saxon carried the day on this first day of competition in King Kat’s 2017 schedule. The local team carried 131.24 pounds to the scales to claim a narrow day-one lead.

Following close behind was Shane Queen and Blake Williams with 131.04 in the second-place spot.

At the end of the day it was Shane Queen and Blake Williams at the top of the heap. They had trailed Richard Wimmer III and James Saxon after day-one by the slimmiest of margins. Their winning weight was 209.88 pounds.

“It was definitely tougher today,” continued Williams. “I felt like they were short-striking it really bad today. We missed a lot of fish we should have caught. We fished both days anchored up.”

“We caught most of them in one hole,” added Queen. “We moved a few other places, but didn’t catch much, so we just went back. Most of our fish came out of one spot. It was late before we caught that fourth fish. It was small, but we were glad to catch it. If it had not been for that last fish we would not have won.”

“We might not have won if it were not for the bait from Jammie K Outdoors,” joked Queen as he named Williams’ daddy’s business. “I told him on Thursday we was going and he better hold some bait.”

Richard Wimmer III and James Saxon finished in second place with a two-day total of 205.68 pounds. They fished on the anchor for their quality fish. “I drag 90 percent of the time.” Said Wimmer. “But, this week our best fish came while we were anchored up on Russeville flat where the herring were getting pumped in. They are shutting the water off by 6:00 am, so by 7:30 the bite is over. Yesterday the fish bit good for two hours. Today they never bit good at any point. We caught a couple stragglers and worked hard to get three more.”

The top-five was rounded out by Cecil Menshouse and and Jason Withrow with 179.74 in third; Lee Hardee and Brandon Tate in fourth with 177.88 pounds; and John Terry and Ray Morton with 175.12 pounds in fifth.