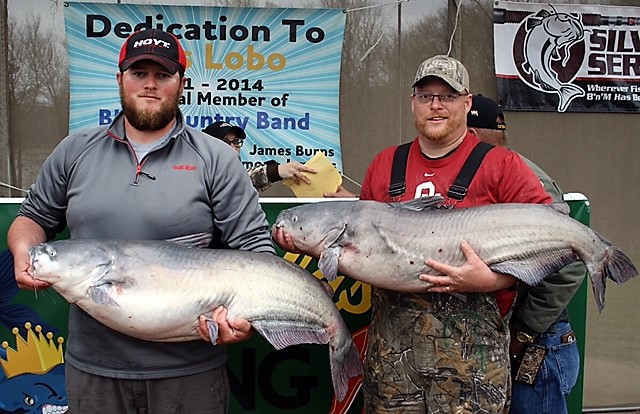 Blue skies, mild winds and temperatures in the mid to upper 60’s prevailed all week during prefishing for the March 4, 2017 Cabela’s King Kat Tournament Trail on Lake Tawakoni at West Tawakoni, Texas. Many anglers were reporting poor fishing as the tournament approached.

Tournament day, as it often does, brought a drastic change in weather conditions. Cloudy skies brought light rain for the day and the winds rose to the 15 to 20 miles per hour range.

The change in weather appeared to change the bite to the benefit of more than 80 top catfish anglers, from 6 states, that participated in the event. The teams were competing for $7,750.00 in cash and prizes, and the opportunity to fish in Cabela’s 2017 King Kat Northern and Southern Championships.

John Allen of Detroit, Texas and Matthew Allen of Barnsdall, Oklahoma carried the day and weighed in a total of168.46 pounds to claim the win. Team Allen earned $3,200.00 for their efforts.

The team fished south of the 276 bridge, where they targeted fish in standing timber. They were fishing in 38 to 40 feet of water using cut and live perch for bait. The team stated that the larger cut perch worked better for the big fish. Team Allen drifted all day and said that the wind definitely helped the bite. In 2 days of pre-fishing, the team only had 1 fish, however they were able to land 10 fish on tournament day.

Kevin Parks of LeRoy, Kansas and Ryan Gnagy of Tecumseh, Kansas teamed up to claim the second-place spot. They weighed in a total weight of 147.56 pounds and earned $1,500.00. They also fished south of the 276 bridge. They also felt the wind help them while drifting cut shad for bait. They reported that the bigger shad worked best for the bigger fish. They caught a total of 7 fish for the day. Kevin had won the Lake Tawakoni event in 2016.

Another Kansas team claimed the third-place honors. Robert Stanley, of Olathe, Kansas and Dustin Sawyer, of Paola, Kansas, weighed in 138.14 pounds to earn $800.00. They fished south of the 276 bridge in the Rabbit Cove area in 28 to 30 feet of water. They drifted, using large cut shad for bait. They also felt that the rain and cloudy skies benefited them in catching their fish.

Justin Cook of New Franklin, Missouri and Gary Ryan of Columbia, Missouri weighed in 88.34 pounds to win fourth-place and earn $500.00. The Rippin Lips team won an additional $820.00 for their 56.46-pound fish that won Big Kat of the event. They fished north of the 276 bridge in 20 to 25 feet of water in a creek channel. They were anchored using large shad for bait.

Fifth-place went to Roger Gerloff of Jefferson City, Missouri and Marty Gerloff of Gasconade, Missouri. They weigh in 88.06 pounds and earned $400.00. The team fished on the rope, south of the 276 bridge. They reported that their fish came off structure, holding close to the bottom. They used large shad for bait to land 10 fish for the day.

Raul Romero of Kansas City, Kansas and Donny Daniels of Osawatomie, Kansas finished in sixth-place with a total weight of 80 pounds. They earned $300.00 for their day’s work.

Tournament director, Jeremy Coe, offered a special thank you to the West Tawakoni EDC Board and staff, as well as, the City of West Tawakoni, TX for their continued support of catfishing. He also thanked the Lake Tawakoni Regional Chamber of Commerce for use of their building for registration. A special thank you went to Cabela’s store and staff in Allen, TX for participating and helping make the event a success.

“As always, Lake Tawakoni proved that it has what it takes to be one of the best blue cat fisheries in Texas and the entire nation,” concluded Coe. “It was tough fishing, as Lake Tawakoni is known to get at times, but we still weighed plenty of big catfish. We are looking forward to returning to our second home on Lake Tawakoni in 2018!”

The next King Kat event is scheduled for Decatur, AL on the Tennessee River (Wheeler Lake) on March 11, 2017.