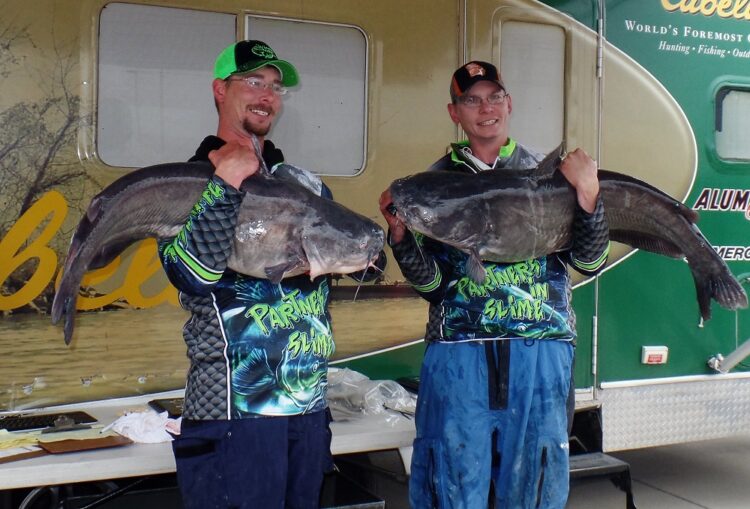 King Kat anglers started out on a cold Decatur, AL day. Temps were in the lower 40s and light rain scattered the area. Skies started clearing and the day got encourageably brighter, before more clouds rolled in to keep the temperatures from raising much. By one o’clock it was still only 46 degrees with the wind creating a “feels like” temp of only 38 degrees. It felt colder and colder as the weigh-in proceeded into the late evening hours.

Decatur has some of the best facilities anywhere, and is very welcoming and happy to see the catfish anglers come to town. Forty-three teams, from 13 states came to compete in the one-day competition out of Ingalls Harbor.

“We are excited to welcome Cabela’s King Kat back to Decatur and Wheeler Lake,” said Melinda Dunn, President and CEO of the Decatur and Morgan County Convention and Visitors Bureau. “The event last year included guests from 12 states and brought needed lodging tax revenue during the winter months. Many of them traveled to Decatur and ‘tested the waters’ in advance of the tournament and many of them stayed three to four nights while here for the event. The huge fish caught in the tournament solidified Wheeler’s reputation as one of the nation’s top catfish lakes. We enjoy working with the Cabela’s tournament series team and meeting the anglers who travel to our city for this event.”

North Alabama is welcoming to catfish anglers for a reason. The area offers much more than fishing. “Catfish tournaments give us another way to showcase our lakes and expose anglers and their families to all that North Alabama has to offer, added Angie Pierce, Vice-President of Operations and Assistant to CEO, at Alabama Mountain Lakes Tourist Association.

Tournament director Jeremy Coe refers to Wheeler as one of the best fisheries the King Kat trail travels to, and most anglers agree. They are hoping to be holding their new personal best on the stage at weigh-in.

It is not always the big fish that determine the winner. Alabama law allows only one fish over 34 inches per person. That means that in tournament competition any team can only weigh in two fish over 34 inches. When a team catches two overs, they can only cull one if they get a bigger fish, but more importantly they have to add 3 fish that measures less than 34 inches to make their 5-fish limit. Sometimes it is the unders that are hard to come by.

In the case of the winners, Aaron Churchwell of Acworth, Georgia and Jake Herman, of Kennesaw, Georgia, they had some fine unders to help put their bag over the top. Keep in mind, that a good under might weigh about 20 pounds. “That big under weighed 29 pounds,” said Churchwell following the tournament. “That is the biggest under I ever saw.”

The Georgia team added that big short fish to 4 other nice cats to reach a whopping 144.70 pounds to claim the top prize of $3,200.00. They also qualified for the Hotel Bonus of $500.00 offered by the Decatur-Morgan County CVB office.

Churchwell and Herman are motivated by a goal to place in the top five when they fish a tournament. They were encouraged in prefishing, which helped them identify some spots to hit on tournament day.

“We came up and prefished the Tirana section of the river last week and caught some really good fish,” offered Churchwell. “The biggest was a 64-pound blue. We also caught a 49-pound flattie, a 48-pound blue and a 42-pound flathead.”

“We went back to the same thing that worked for us last weekend to see if it would pay off,” continued Churchwell. “We wanted to see if the fish were still there. They were! We stuck with it a little longer than we normally do with this weather, just to give them a little more time. We found the smaller baits were best on the big fish.”

“I think it was this cold front,” added Herman. “I think it made them eat smaller baits. As the day went on, we started going back up in bait size and continued catching quality fish. We were on the anchor all day and caught about 10 fish. Three of the ten allowed us to cull and upgrade our bag. Upgrading wasn’t easy, because we just kept catching 34 ¼ inch fish. That big short fish really helped us.”

“We love Wheeler,” offered Churchwell. “Alabama does one heck of a job protecting their trophy cats and the Tennessee River has all the right ingredients to produce trophy fish in numbers.”

Second place went to Tim Peppers of Dallas, Georgia and Shon McWhorter of Decatur, Alabama. They fished upriver, about 5 miles north of Decatur where they got on big fish in 18 to 20 feet of water, but could not catch the quality shorts they wanted.

“We pulled up to a spot and decided we would do a little anchor fishing before we set out drifting,” reported Peppers. “Within the first 30 minutes we already had 4 fish in the boat. Within an hour, we had caught 9 fish in the same spot. We decided we were going to anchor fish all day and cull fish. We just couldn’t get anything under 35 inches the rest of the day.”

“I think this cold front coming in kinda’ put em’ on a bite,” added McWhorter. “We were on fish all day. When we had big current we got quality fish. When we didn’t have current this morning we were catching an abundance of fish. Big chunks of skipjack seemed to work best for us.”

“Once the current got better they started getting bigger,” said Peppers. “We had a great day catching about 18 fish, but, we needed smaller fish.”

Peppers and McWhortor finished the day with a weight of 131.06 pounds to earn $1,500.00 for the day and claim the second-place spot.

Shannon Colley and Wayne Reed took third place with a weight of 129.86 pounds. They only caught 6 fish for the day, but they were good fish. They earned $800.00 for their efforts.

Persistence paid off for Colley and Reed. They fished about 15 miles downriver from Decatur in 35 feet of water using skipjack to catch their third-place bag. The team credited patience and steady dragging in one area of the lake for their success. “We were draggin’ a traditional Santee Cooper draggin rig,” said Colley.

“We adjusted the weight to what we needed to keep it on the bottom,” added Reed. “We were needing 3 to 3 ½ ounces to stay down.”

“I have got to where I don’t travel a lot,” added Reed who lives in Summerville. “I am blessed to have one of the best lakes for catfish right here in my own backyard. Anytime you have the opportunity to put a hook in the water here, you have a chance to catch a 100-pound cat.”

Colley had made the trip from Beaver, Ohio to team up with Reed in the tournament. “Everybody should fish here,” concluded Colley.

In fourth place were David Shipman and Brooke Wilbanks, both of Corinth, MS. The well-known B’n’M prostaffers weighed in 119.22 pounds to earn $600.00 for their efforts.

“We fished 10 miles south of Decatur,” reported Shipman. “We targeted ledges early in the day and moved to brush piles in 30 feet of water later. We baited our B’n’M Silver Cat poles with skipjack to land 9 fish for the day.”

Kelly Godbolt of Conway, South Carolina and Ron Howard of Eutawville, South Carolina, took fifth place, breaking the 100-pound mark with 109.30 pounds. Their bag earned them $400.00. They fished 15 miles south of Decatur in 15 to 25 feet of water using skipjack to land 10 fish during the day.

James and Nathan Maynard and Brian Collier, all from Benton, Kentucky finished in sixth place. The three-man team weighed in an even 106 pounds to earn $300.00. They also won the drawing for the Decatur-Morgan County CVB Hotel bonus of $500.00 for staying in one of 8 host hotels.

Michael Clark and Brian Meares won Big Kat of the tournament. The big blue beat out the 59.18 pound second place fish of Ryan Lawrence by only ounces. Clark credited Mears for catching their 59.70-pound winner that earned them a check for $860.00.

Patience is often the key to any fishing success and it was no different in this case of the Summerville, AL anglers. “Patience was the secret today,” offered Mears. “We anchored up all day long in about 60 feet of water. We were fishing a Carolina Rig and caught all our fish in one area. We had all of our rods out of the water except for two when we caught the big fish on a piece of skipjack.”

The Hotel bonuses won by Churchw/Herman and James and Nathan Maynard was provided by the Decatur-Morgan County CVB office. To qualify, the teams had to stay at a Decatur-Morgan County Hotel.  A total package of $1,000 dollars was split into a $500.00 bonus that went to the winners if they qualified, and the other $500.00 went into a drawing with all the other anglers who produced a receipt to verify their stay.

Tournament director, Jeremy Coe, added a special thank you to Melinda Dunn and the staff with Decatur, Alabama CVB for hosting the event and for adding the $1,000.00 hotel bonus for staying in a Decatur-Morgan County hotel. He also thanked Ingalls Harbor for such a wonderful weigh-in facility.

“Wheeler Lake proved itself, once again, to be a Big Kat fishery,” said Coe. “We are always excited to be on Wheeler Lake, as are all the anglers!”