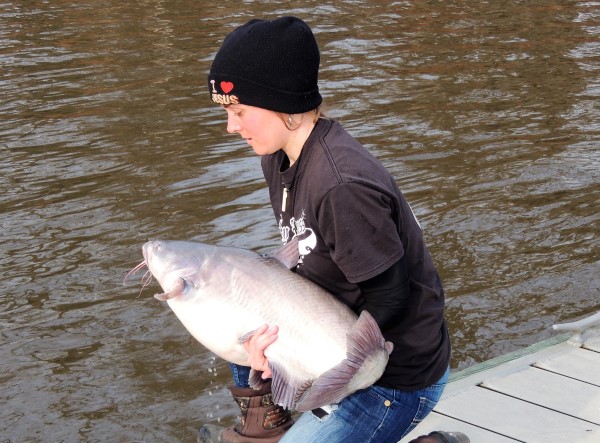 “Wanna’ know why I CPR?” That was the question posed by Kenneth Williams on his Facebook page. His answer was short and to the point. “I met two guys on the water today. One said he’d never caught a catfish over 14 pounds! The man was in his 30s. That’s why I CPR, to give guys like that a chance!”

Williams believes that CPR supports his own dreams too. “Basically, if I keep a big fish, who’s dreams did I just kill? I am personally dreaming of catching a flathead over 50 pounds and a blue over 80 pounds. I’ve been fishing my whole life, but just in the past year have I been trying to catch my dreams. The more educated and proactive the public is on CPR, the better chance anyone has to catch a trophy catfish.”

Williams is not alone in the quest to educated fishermen and women on the importance of Catch-Photo-Release (CPR) to the trophy cattish population. More and more catfish anglers are picking up the banner and promoting CPR as a conservation effort that anyone can participate in. All it takes is the right attitude about the bigger fish.

Tournament anglers have a slightly more difficult challenge in their CPR efforts. Many tournament anglers have specialized livewells that help care for the fish while they hold them before weigh-in and it’s getting better. The good news is, manufacturers that support the sport of catfishing have responded to the call with more products aimed at fish health.

One such innovation was on display at the recent Catfish Conference in Louisville, KY. A relatively new product called, the Survivor Live Well Water Intake System, installs easily on any boat and picks up fresh water and delivers it to the livewell, through the water pump, as the boat moves through the water.

Robert J Idzikowski, Krusher Marine Products LLC (www.krushermarine.com) brought the product to Catfish Conference and found a very welcoming audience. “The health of any fish, while in our possession, is completely on our shoulders,” remarked Idzikowski. “Since my early days as a fishing guide and then a tournament fisherman, conservation has always been on top of my list.”

That priority has not changed as he became a business owner in the industry. It is obvious in the company’s mission statement that reads, “LIVE RELEASE. THE FUTURE DEPENDS ON IT!”

“Ethics, morals and values are what we at Krusher Marine Products, LLC are all about,” continued Idzikowski. “Always have been, always will be. After meeting a lot of catfish anglers, I would like to thank the catfishing community for showing how much they truly care about the future of the sport.”

His product provides the essence of what catfish (or any other species) needs to survive. “Our Survivor product will provide more of what the fish requires, and that is fresh, clean, oxygenated water. Pure and simple,” concluded Idzikowski. “As one of the visitors to my booth said, ‘I have been looking for this forever. No more empty livewell!’”

One early adopter of the Survivor is Tim “Doc” Lange. He is a well-known tournament angler and co-host, with Lyle Stokes, on Catfish Weekly.

“The installation was very easy,” explained Lange. “Just removed the debris screen from the pump intake, slide the Survivor in place, adjust to the level from the instructions and tighten the hose clamp. That’s it.” (Idzikowski explained that his product will fit any boat with the adapter that is included in the kit.)

“When I tried the unit out it pushed water into the back livewell without the pump on,” offered Lange. “I haven’t tried it with the front well just yet. Some boats are known for getting air locked on the livewell pumps so this unit takes that away.”

“I have spray adjusters for my livewell so I can regulate the amount of water I put in there,” revealed Lange. “If you are anchored down on the river and have good current it will push fresh water into the tank. I was dragging baits at .5 mph and water was coming into the tank.”

“Another advantage of Survivor is that if you are moving, or anchored down in current, the water is always being replaced,” said Lange. “That is great for the fish. The survivor is cleaning out any ammonia the fish may have dumped. That is the number one issue with keeping the fish in great shape.”

The mechanical ability of survivor to put fresh water in the livewell is an awesome approach to fish health. It is also a well-known fact, that chemical additives can aid anglers in keeping their fish alive and healthy.

Jody Harrison has a product, developed in the bass industry, that is now being used successfully to improve catfish health in the live well. He responded to his own observations of too many dead fish following tournaments. “We spent 5 years developing our Fishlife Live Well Treatment,” reported Harrison. “We gave it to anglers and received feedback from folks who had no reason not to be truthful.”

“During this time, we developed another product based on feedback from the anglers,” continued Harrison. “Report after report came in telling us our products were stopping the bleeding of tongue and gill hooked fish, which is normally a death sentence. Further research developed the Fishlife First Aid Kit Treatment, which focuses exclusively on blood stoppage.”

Late in 2015, Harrison was introduced to tournament Catfishing. “I was amazed at the size of many of these fish being brought in. I also knew that in order for these fish to reach this size they were very old and needed to be taken care of properly. I gave our products to a couple of local catfishermen and had them start testing the products on catfish and the feedback was good.”

The Fishlife Live Well Treatment is specially formulated to treat and add beneficial electrolytes to the water that anglers have in their live wells, giving the fish a healthier environment, while waiting for weigh-in.

“The treatment reduces the stress the fish are under while in the live well,” said Harrison. “It also enhances the slime coat of the fish, which is the primary barrier against infection. It works as ‘first aid treatment’ to any injuries or bleeding the fish may have. The product actually forms a protective coating within the live well to protect the fish’s slime coat from abrasion commonly found during transport.”

The Fishlife First Aid Treatment is a proprietary formula that is used for helping reduce, and in most cases stop, the bleeding of fish due to being hooked by rod and reel fishermen. “Simply pour this product on the wound and place back in the live well that is treated with Fishlife Live Well Treatment,” explained Harrison.

Harrison’s entry into the catfish industry has resulted in other products especially for the sport of catfishing. “In 2016 we also launched the Fishlife Fin Clips, the Fishlife Fizz Needles, and an all in one package, the Fishlife Fish Aid Kit,” reported Harrison. Those products can be checked out at http://www.fishlife.net.

As more education on the benefits of CPR brings more anglers to participate, tools like the Survivor Live Well Water Intake System and Fishlife products will aid anglers in preserving a trophy catfish industry. Regardless of the tools available, in the end, CPR depends on the individual anglers’ decisions to do what they can to revive then and let the big ones go.