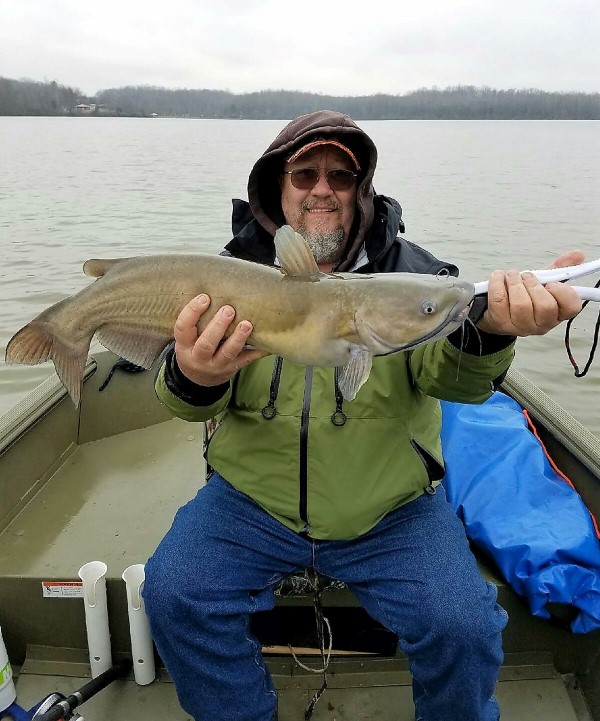 Addicted and loving it.

Tim “Doc” Lange has been addicted to fishing for 56 years. He is a very humble man that is willing to teach anybody, anything he knows. Likewise, he is always willing and able to learn from others.

The Springfield, OH resident is a self-described “maniac” when it comes to catfishing. “I love being on the water and I love being on my boat,” declared Lange. “I love watching rods get doubled over. I enjoy fishing for catfish and stripers, but mainly catfish – any species of catfish. I also like fishing for skipjacks. If they are biting, I’ll fish all day long for those guys.”

His introduction to catfishing was a two-way street in terms of who benefited most. “I was a young lad of eight years old when I started fishing with my Grandpa Galey,” recalled Lange. “He had a place on the Great Miami River in Degraff, OH. If I wasn’t in school I was on the river with him. At first, I was proud that he took me with him. Then, I realized that he needed my strong, young arms to row the boat upriver.”

“…you are gonna’ have bad days. You have to deal with them…”

“Grandpa was a mountain of a man,” continued Lange. “It took me a while to figure out why he really enjoyed having me on the boat with him. I rowed that boat for several years and I never tired of it. He was a gentle giant in my eyes, who had a passion for catching catfish. It was a glorious day when he bought a gas engine for the boat. That event really opened things up as we ran limb lines for catfish.”

Lange’s early fishing was often an overnight experience. “We would go out just at dark,” explained Lange. “We set our lines and then return early the next morning to run them. During the daytime hours we fished with rod and reel and that’s how he taught me to read river seams. He always knew where those catfish were located. He loved to fish for catfish and he passed that on to me.”

“Even back then we practiced conservation,” mentioned Lange. “I can’t say CPR, because nobody took pictures back then. Grandpa believed in living off the land, so we only took what we needed to eat. Once we got our limit we stopped. We never kept any fish bigger than ten pounds.”

“Today I honor the practice of CPR and do not keep any fish at all. I preach CPR, but if someone wants to keep some fish for eating it’s not a problem. I might say something to them if I see they are keeping a fish over 10 pounds, but it is their choice and they don’t have to agree with my opinion.”

Lange gives a high level of attention to conserving bait as well. “I try to never take more bait than I really need. Bait can sometimes be hard to get and I would rather leave some for the next guy.”

Lange extends his conservation efforts beyond the harvesting of fish. “I have always believed in keeping things clean,” explained Lange. “I never put trash or anything in the water or on land. In fact, I get real upset when I go skipjack fishing and see the banks covered with trash and fishing line where people just toss stuff down, I always have a trash bag with me and I always pick up the area around me before leaving,”

Many anglers remember their best and worst days of fishing. Either can be the motivation that makes them return in the future. Those best days they want to repeat, and the worse are a challenge to do better. Lange recalls both of his with great precision.

“My best day ever was fishing with Lynn (his wife) in a DuraCats tournament out of Mount Vernon, IN,” began Lange. “The river was very high, almost out of the banks. It took 8 ounces of lead to keep a large skipjack head down. We were just about ready to leave when Lynn said, “Give it 5 more minutes.’ I barely got set back in my chair when the rod in front of me took a slow takedown and never stopped. It was a 50-pound flathead.”

“I am a run-and-gun angler, so we ran from spot to spot,” said Lange. By the end of the day Team Lange had accumulated 179.3 pounds of catfish in the livewell to win the tournament and big fish honors.

“Ironically, Lynn was fishing with the same bait as I was,” recalled Lange. “She never had a bite all day long. She netted all our fish from all my rods, but I certainly learned to trust her intuition that day. I also learned that you can catch flatheads in high current situations and certain times of the year cut bait will outproduce live bait.”

His worse day carried lessons too, with events that added insult to injury. “My worst day fishing was at Monsters on the Ohio, 2016,” recalled Lange. “I was fishing with Lyle and Cindy Stokes. Lyle had found good fish the day before, several groups of them. On tournament day they all had lockjaw. It didn’t matter what we threw at them, they didn’t want to bite. The whole day was like that. No matter what we did it was wrong.”

“Lyle had a huge takedown in 35 foot of water,” declared Lange. “The fish was pulling lots of drag. I grabbed the net when a 4-foot gar appeared behind the boat. It was total disappointment, but a beautiful fish and one of the largest gar I have ever seen on the Ohio River. To make matters worse he lashed out at me as I went to remove the hook and I dropped a Leatherman Multi-tool that I have carried for years. He also left a nice 2-inch scar in my right hand.”

“We never caught any fish to take to the scales. It was the first time I had been skunked at Monsters on the Ohio tournament. We had a great time and still talk about that trip to this day, but it was one of the most frustrating days I have ever had on the water.”

“The lesson from that day is never give up. Keep going full bore, because you are gonna’ have bad days. You have to deal with them and if the fish aren’t going to bite you certainly can’t make them.”

Doc’s passion for teaching others about the sport extends to teaching kids. “You have to be patient with them,” observed Lange. “And, you must be able to get them on a ton of fish to keep their attention. Put them on fish and you won’t have bored kids on your hands. If they are, then they won’t enjoy the time with you.”

“Before I fish with my grandkids, we always have a safety talk before we get on the boat. It’s a routine of mine. I let them help me with getting things ready and I let them reel in the fish. Now, as they have gotten older, they all are learning to net and hold the fish, and remove the hooks. It’s a progression and kids learn fast.”

As a tournament fisherman, Doc Lange has a lot of catfish history behind him and plenty of catfishing days ahead. His website, (www.hookedoncatfish.com) has been on the internet for nearly 20 years. He was a pioneer in sharing catfish information with others through the articles and other information he posted online as he grew along with the sport of catfishing.

Doc hopes to be remembered as a wonderful husband, grandfather and someone who cares for the land, the water and all of the gifts that God has bestowed on him.

“I wish I could have met my wife Lynn a lot sooner,” remarked Lange. “We have shared so many great times together, both on and off the water. I don’t like getting old, because I want to develop and share more memories, and the clock is ticking.”

Catfishing is a total release for Lange. “When I fish, I tune the entire world out,” concluded Lange. “It’s one of the most stress relieving activities I know. I really get relaxed when I’m on a boat, where I just want to catch fish. I have done it my entire life and it just comes naturally to me. As long as my health holds up, and I can safely get in and out of a boat, I figure I’ll be on the water. It is my happy place.”