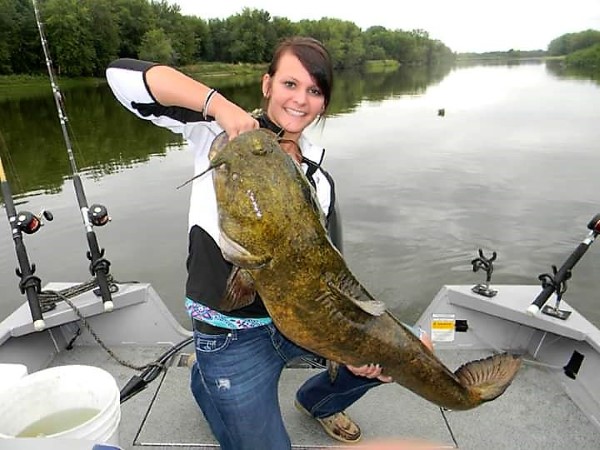 Do you know when and where to look?

Matt “CatMatt” Jones is known for his enthusiasm for the sport of flathead catfishing. He has a particular penchant for flatheads and has spent years as a student of the whiskered critter. “Flatheads are my passion,” revealed Jones. “My friends call me ‘Flathead Freak’ and my boat is known as the ‘Flathead Battleship’. I spend countless hours scouting, researching and hunting flatheads on the Rock River.”

Those lessons learned by CatMatt on the Rock River are applicable to fishing early season flatheads on other rivers too. “The biggest change in flathead fishing has been changing the mindset that you had to fish at night,” offered CatMatt. “It’s just not true.”

The growing popularity of tournament catfishing and the success of daytime anglers have helped quell that long held myth about flathead catfishing. There are still plenty of flathead anglers that prefer to chase flatties at night, but more anglers understand that it is not an absolute necessity.

Jones is now fishing from “Flathead Battleship, VII.” The name he chose for his boat is indicative of his passion for chasing flatheads. The first Battleship was christened in 2003. Technology and equipment has witnessed many changes over those years, but Catmatt says techniques for catching early season flatheads has not changed that much. The secret is in knowing when and where to look.

Transition periods, when flatheads are coming out of their lethargic cold weather mood, vary region by region. “In the South, flatheads do not vary their location as much as they do in the north,” informed CatMatt. “Southern waters are characterized by warmer water temps and longer periods of steady water temps. In the North temps vary greatly from summer to winter causing long periods of inactivity.”

“In the southern parts of the country flatheads can be caught all year round, because water temperatures run more than 45 degrees almost all year. In the northern parts of the country water temps vary from 30 to 40 degrees for months at a time and leave the flatheads sluggish at times,” said CatMatt. “I divide the year of a flathead into 2 categories by region. In the north it is ‘Can Catch and Can’t Catch’. In the south, its simply ‘Catch,’ because it’s year-round.

“…most of the time the bait is inhaled and the flathead never moved!”

“For early season flatties it is more important, no, I will say imperative, to keep up with water temperatures and know how to adjust to the changes,” emphasized CatMatt.

Flatheads, just like many other fish, get lethargic in the cold weather months. They stay in that mood until temperatures rise. “Flathead typically winter in holes with cover or a sharp drop,” continued Catmatt. “They are preferring areas of reduced current flow. Following periods of inactivity flatheads will move and feed. They start to move around when the water temps rise into the 50’s.”

Once the flatties begin to move, CatMatt has specific target areas to fish and local knowledge can be beneficial. “Deep water ledges serve as travel routes when the fish are on the move,” said CatMatt. “In some waters 10 foot is deep, while in others it may be 40, 50 or deeper. Submerged rocks and wood serve as resting stops and provide other early season target areas.”

“I start my day checking water level, flow and temperature,” revealed CatMatt. “I also want to know the wind direction. Wind tells me which section of river, or which river to fish. The wind can make fishing super tough, especially since boat position and bait placement are so critical.”

“On a super windy day, for example, with a south wind, I may opt to fish areas with lots of east to west flowing areas,” suggested CatMatt. “I would target areas with high banks or areas lined with trees that provide a wind break. Finding suitable areas allows me to be much more accurate with boat control and bait presentation.”

Once an early season spot is determined, the decision process turns to bait choices. Fishing early in the season calls for small baits, progressing to larger baits as water temperatures rise. “Fast rising temperatures allow you to use bigger baits sooner,” instructed CatMatt. “Water temperatures, steady in the 50s, calls for small baits, whether live or cut. Once water temps reach 60 degrees and more, you can increase the size of baits, whether they are cut or live.”

“Most anglers believe that flatheads prefer live bait,” commented CatMatt. “I like it alive also, but cut bait works great too, especially in cool water periods.”

CatMatt varies his rigging in different fishing scenarios. One early season method he uses is drop shotting. “If I am drop shotting I will pull right up on exposed cover. My hook of choice is a 7/0 Matzuo Sickle hook. I use no leader and only enough weight to keep the bait somewhat under control. The weight on my drop shot rig helps me guide live baits down through would-be snags. I can’t afford to lose contact with the bait, because most of the time the bait is inhaled and the flathead never moved!”

“If I am on submerged cover I add a 6- to 10-inch mono leader,” explained CatMatt. “I use mono simply because I like the stretch. Hook setting in tight quarters calls for some give, that’s why I love a strong abrasive resistant mono like Cajun Red in the 30- to 50-pound range. I want the bait to move and struggle. It results in more snags, but also more fish.”

CatMatt also likes to target holes with drop offs that are so substantial the flow of the river is reduced. “If there is no cover in those deep holes I like the bait to move freely and attract attention,” clarified CatMatt. “In this application, I add a longer 3- to 4-foot Cajun Red mono leader appropriate to the size of fish I expect to catch.”

Early season fishing can sometimes be associated with flood waters on the rivers. “High water can make things tough,” warned CatMatt. “Unless your fishing in a river system with a super high population of fish it can be a long day. One productive presentation for me has been to jig baits on flooded cover, like flooded root systems.”