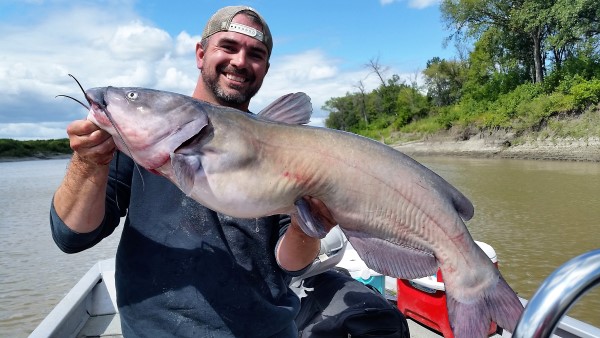 Unless you are in the north they seem to be the black sheep of catfish. In the grand scheme of catfish, the channel cat is the distant third cousin of greatness to most anglers. Sure, they are great table fare and they account for most of the catfish caught in the United States. As far as fight goes, a large angry river channel cat can fight pound for pound as good as any other fish on the planet, especially on lighter gear.

To be fair, there are many places that simply do not hold as many huge channel cats, while there are others that are dominated by these monsters. The definition of a trophy channel catfish is different in in different bodies of water and parts of the country. One thing that is constant with channel catfish – they will act the same no matter where you are.

Famous channel cat fisheries such as the Red River of the North or Lake Mendota in Wisconsin, have the market cornered on landing huge channel catfish.  Channels topping the scales at twenty-plus pounds are fairly common.  In the case of the Red River, this amazing average size is due to the foresight of the states of North Dakota and Minnesota as well as Manitoba, Canada. They put tight protections of trophy catfish back in the 1990s.

“…bigger and badder catfish will get the best places to rest, feed and live…”

It should be noted that twelve pounds is considered a trophy channel catfish by the North Dakota Game and Fish Department. This is because, in the rest of the state (other than the Red River) a twelve pound or approximately thirty-inch channel cat is a true trophy. Meanwhile on the Red River (border of North Dakota and Minnesota) many anglers throwback twelve pounders without a second look while shooting for an eighteen to twenty pounder or bigger.

Because channels don’t get the best places to live and eat they may not have the feeding and growing ability of the other fish. This real estate battle plays a bigger role producing big fish than many give it credit for.

When you get down to business as to why many waters don’t hold large numbers of large channel cats it comes down to the real estate battle. Most waters in the south and east have blues and flatheads. They grow big and eat a lot, hence they win the real estate battle out of sheer size, and in the case of flatheads, aggressiveness.

Like with a big family, the catfish world has a pecking order of supremacy.  The bigger and badder catfish will get the best places to rest, feed and live their lives.  Generally, the channel cats are the smaller fish in the system, so they get what is left over. They have to fend for themselves and adapt to the conditions they face while trying to survive.

Going back to the Red River, there are no blues or flatheads in the system leaving the channel cat as the apex predator. They get the best of everything to help them grow and survive. They get to spawn in the best holes and they get to feed in the best ambush places.

This is not proven yet, but it is known that catfish, more than many others, have metabolic requirements that require them have to eat much more in warmer climates. Think about this for a moment, a northern channel cat eats virtually nothing during the winter months allowing its metabolism to use almost no energy. Catfish in the southern states don’t get that break. They have to expend much more energy to keep up with the food requirements to maintain stature and grow. By the time these fish reach ten to twelve pounds they are almost out of lifespan.

So how does one go about targeting trophy channel cats? In a river system with no other catfish you would follow the current seams, fish the heads of holes and the outside edges of snags with current washing off them.

Time of year and current weather conditions dictate which of those areas would produce fish the best. Channel catfish are ferocious feeders when they want to be. Trophy channel cats, when the time is right rest, eat and repeat, usually not venturing very far from where they are actually feeding. They are also very opportunistic feeders. Even if they are not actively feeding, if someone were to put a good easy meal in front of them, the chances are they would take it just for the sake of it being easy.

In places where other catfish live these locations are more of a crap shoot for trophy channel cats. The upside to this is that you can usually catch a flathead from the wood piles or a blue from the current seams.

As stated earlier, there is a real estate battle going on. The smaller channel cats will be in the smaller holes and along the banks hoping not to be eaten. As they grow and start winning some real estate battles, to get into better feeding and resting areas, they will be able to grow much faster. The areas to look for them will also change to more aggressive current or feeding areas.

Today’s electronics make finding this structure much easier than it was even ten years ago. Nowadays there are maps available to show us the structure. If our water does not have a map we can simply make one. Side image technology can be used to locate structure and even identify which fish to target.

Catching trophy channel cats in lakes is a different animal all together.  This is where slow trolling or drifting comes into play. You have to utilize your electronics and trolling motors more to stay in the zone. Daris McKinnon, from Colorado, says, “A slow troll or drift along structure is the key to catching the big channels. If you can find shallow weed edges, even better, as these catfish will use these weeds as ambush points along the structure to attack.”

Many people think the deepest, most expansive holes are the best places to find catfish. While this may be true some days, they are also the first places to get fished out because everybody knows about them and they can be found easily. In my experience, the best holes are the smaller less traveled ones.

Not only are small, shallow holes good, but so is shallow structure near the bank. This theory goes against just about everything written, but catfish will go and stay shallow if the food and cover is there. These spots are good just about any time of day and any time of year.

Catching trophy channel cats depends on the waters you fish and the population density of other catfish, but the big channels are there. Baits and techniques may differ from place to place, but if you can break the code it is tough to beat a hard-fighting channel cat.