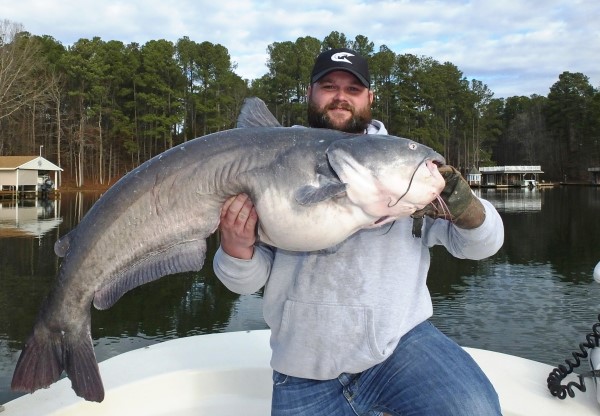 Study your maps and have a game plan

Catching trophy blue catfish ranks among America’s ultimate big-game freshwater fishing adventures. Blue catfish are found extensively in lakes and rivers across the country and in many places top-end sizes, are growing exponentially. The quick profile on blue catfish is that they’re eating machines, they grow fast, are adaptable and to an extent predictable.

But tactics targeting behemoth blues differ from simply trying to catch a cooler full of table fare sized blues. Catfish experts have a well-defined game plan in their quest for trophy blues.

One such angler is Zakk Royce, a catfishing guide on Lake Gaston in North Carolina. Royce is qualified as a trophy catfish expert, having set the North Carolina state record twice, on consecutive days, in December 2015.

Royce caught a huge catfish late one evening and he kept it alive until the fish could be weighed and certified the following morning. That blue catfish pulled the scales to 91 pounds, a new state record. With help from his dad he returned to Lake Gaston to release the behemoth, and they decided to fish a while.

“I called the fisheries guy with the state and he turned around and headed back before he’d even made it to the office,” Royce said. “Since that time, I’ve caught another 100-pound blue. I believe Lake Gaston has the potential for producing a new world record blue catfish (currently 143 pounds) and that’s every serous catfisherman’s quest.”

The 26-year old Royce makes his living targeting big blues with great success. He said catching big blues consistently is not based on random luck.

“I’ve found with the right approach, we can consistently catch big blue catfish,” he said. “I believe multiple factors intertwine to be successful. I pay strict attention to details.”

Tackle for Trophy Blues
All catfish tackle and rigs are not created equal when targeting trophy blues and Zakk Royce has specific tackle that works for him on Lake Gaston.
“I’ve experimented with a lot of tackle and have found what works best for me,” he said. “It’s a function of the size of fish I’m after while still enjoying the process of catching catfish of all sizes.”
Royce begins with a 7 ½ foot Big Cat Fever medium-heavy action rod and 6500 ABU reels loaded with 30-pound test Berkeley Big Game line. He has a 2 ½ foot leader of 60-pound test of the same line. For large baits, he prefers a 9/0 circle hook and for smaller baits he’ll use a 7/0 circle hook. Matching the hook to the size of bait is important.
He uses homemade drift weights and prefers a two-ounce weight on regular lines and a one-ounce weight on his planer board lines.
“This combination is perfect and allows me to have the power I need for huge fish, but not overpower smaller fish,” he said. “I use planer boards a lot and these rigs work great when pulling boards. I hook a lot of my big catfish on planer board rigs away from the boat.”
Royce has developed his own line of planer boards and inquires for those can be made by phone.

“If serious about catching a big blue an angler must be fishing as much as possible,” Royce said. “It’s more than just having baits in the water. Time on the water encompasses the process of finding and keeping up with big fish movements. Most big blues move throughout the year in lakes or rivers. If my production on large fish slows, I move to find them. A shift in location of big catfish is often triggered by movement of their preferred forage or current or water condition changes.”

Royce said the next key component is having the right bait.

“The right bait is a moving target when considering trophy blue catfish,” he said. “It’s crucial to use the bait that big blue catfish are already targeting in a specific lake or river. For Lake Gaston, white perch and gizzard shad are my two basic, year round ‘go-to’ baits because big blues are already eating them. Seasonally other fish species become a large component of their diet so I use those. The bottom line is to give them what they’re already are eating. Even then the daily preference may change so I offer a variety of baits until I hit a pattern for that day. They are predictable eaters from a generic standpoint, but sometimes picky.”

Royce said to give trophy blues bait options from the body of water you’re fishing. Also, check the regulations for the water you fish in terms of any restrictions on bait.

Royce said presentation is crucial to success. He primarily drifts for blues and he prefers to use his electric motor to keep the boat exactly where he wants it.

“It’s imperative to keep the speed right when drifting,” he said. “If the speed is too fast, a big blue may see the bait but the presentation is wrong and he won’t bite. Move too slow and you may not cover enough territory to present the bait to big fish. I generally prefer the 0.4 to 0.6 miles per hour speed for trophy blues, maybe a little faster during hot weather.”

Royce said anchor fishing setups are good presentations for big blues, but require more patience. His preference is drifting but both produce, drifting is simply his personal preference.

Presentation also encompasses bait size. He catches trophy blues on huge baits as well as moderate sized baits, some as small as 1.5 inches by 1.5 inches.

“I vary bait size daily searching for the pattern of the day,” he said. “Big blues won’t shy away from huge baits, but sometimes smaller baits trigger a bite so I use both.”

The final thought process sounds like a real estate sales guide, but location, location, and location are crucial.

“Time on the water encompasses the process of finding and keeping up with big fish movements.”

“You can have the best bait in the world but if you present wrong or in the wrong place it’s no good,” he said. “You’ve got to be on the right body of water. A perfect example is Lake Gaston is currently producing trophy blues and I think the population and top end size of the fish is still expanding. If targeting trophy blues, fish where big blues are currently being caught. Some places are great for numbers but not trophy sizes.

Royce said the next ‘location’ is targeting a specific part of the lake at different times of the year.

“It’s crucial to stay in the area of lake or river where the majority of big fish are concentrated at any given time,” he said. “Odds are good they are in that location because of forage and they’re eating that forage. I want to fish for big blues that are already in an eating mode.”

The final ‘location’ is the precise target you place your bait, whether drifting or anchor fishing.

“I don’t do random, it’s not consistent for big blues,” he said. “This may take some experience on specific lakes or rivers to determine, but I target specific places on the lake bottom. Usually points, humps, ledges, channels and creek and river junctions are predictable contact areas for big fish. Specific targets change seasonally but I always target a specific underwater feature.”

Royce said tackling a trophy blue can be the ultimate fishing adventure. His drifting strategy is totally adaptable to anchor fishing. Other than the speed of the drift, the strategy remains the same.

“Sometimes I anchor fish because that’s what is required,” he said. “I let the fish tell me what they want by experimenting.”

“A trophy blue catfish is the ultimate fishing experience, it’s my passion” he said.

Royce said study maps, have a game plan for the water you fish and simply enjoy the process.

“Once the planning, strategy and daily adaptations needed for success are done, I simply fish and enjoy the process, especially when a monster blue loads on.”

A short summary of Royce’s game plan for targeting and catching monster blues is simply pay attention to details. And for Royce, everything to that end is a detail.