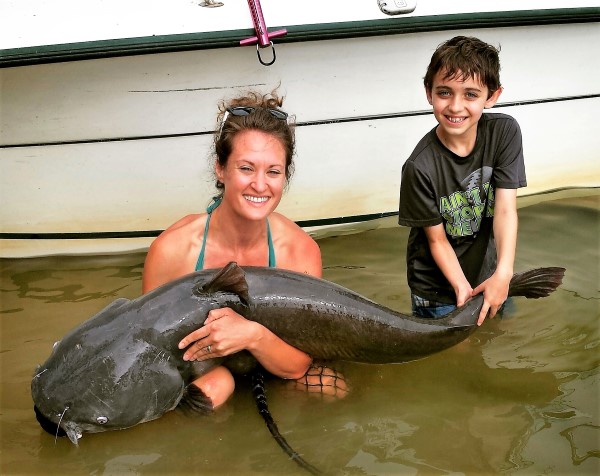 I don’t expect people to understand why we love catfishing so much. Most will never understand why we get up at 4 am to go throw a cast net in the freezing cold. We get on the water before it’s light and don’t leave until after dark. We endure the elements – the wind, the sun, the rain, the snow, the bugs, it’s all just part of the game. We spend tens of thousands of dollars in the relentless pursuit of that one giant fish. Some would call us crazy.

I’m not sure where I got my love of catfishing! My love of fishing definitely came from my grandpa and my parents. I grew up catching bass and panfish, but I remember going to a couple of ponds as a kid and catching 5- to 10-pound channel cats. I remember thinking that those were the coolest fish!

I began researching and started learning about the different species of cats, and I began seeing pictures of the huge fish that were being caught out of Kerr Lake. So, when I got old enough to drive, I started going up every chance I got and fishing from the bank.

After I caught my first citation fish from the bank, i was totally hooked. One thing led to another and I got my first boat. Now 15 years later, I enjoy sharing my passion for catching big catfish with others! I’ve never looked back.

Now, don’t get me wrong, it isn’t always fun. Sometimes I even question myself. But, on Saturday, January 28, 2017, I was reminded of why we do what we do. It was the annual Icebowl Tournament and 150 boats hit the water for the event. One of those boats struck gold when they hooked into a massive 141-pound blue catfish (just 2 pounds shy of the world record).

This catch was not a fluke. Dale Lowe is not just a weekend warrior that got lucky. This is the second fish that he has caught over 100 pounds (considered to be the holy grail in the world of blue catfish anglers). Wanting to ensure that the fish stayed healthy until the weigh-in, Dale made a phone call to our very own Austin Sartin. Dale knew that Austin’s boat was equipped with a livewell that was custom built for just such a fish. Upon hearing news of the fish, Austin rushed across the lake to help.

At the end of the tournament, the fish was taken to a local tackle shop where it was weighed on certified scales. The fish was then taken back to a boat ramp near where it was caught. After taking some quick length/girth measurements, it was time for the release.

I can confidently say that this fish was handled with the utmost care and respect. It swam away strong and healthy! High fives were given all around as we all soaked in the moment. This was the largest blue catfish to ever be caught, weighed, and released ALIVE!

The competition at the Icebowl creates a lot of chatter between VA and NC guys, but at the end of the day it is just talk. We all share the same love and passion for fishing! And, because the fish was released in good health, hopefully somebody else will get to catch it one day. Heck, maybe Dale’s son will catch it in a few years when it weighs 160 pounds – you just never know!

I was so grateful to be a part of this experience, and suddenly I was reminded that this is exactly why we do what we do! Selective harvest/catch and release is the future of our sport, and it is up to all of us to protect our fisheries and waterways so that future generations get to enjoy them as we do. That is a message that we need to pass on!

Why We Catfish Guest Editorial
This column is provided for reader submitted editorials on Why We Catfish. If you have a short story related to why you catfish, you may submit it for consideration and publication in a future issue of CatfishNow. Send submissions of 500 words or less and one or two photos to Ron Presley at presleyr@bellsouth.net.