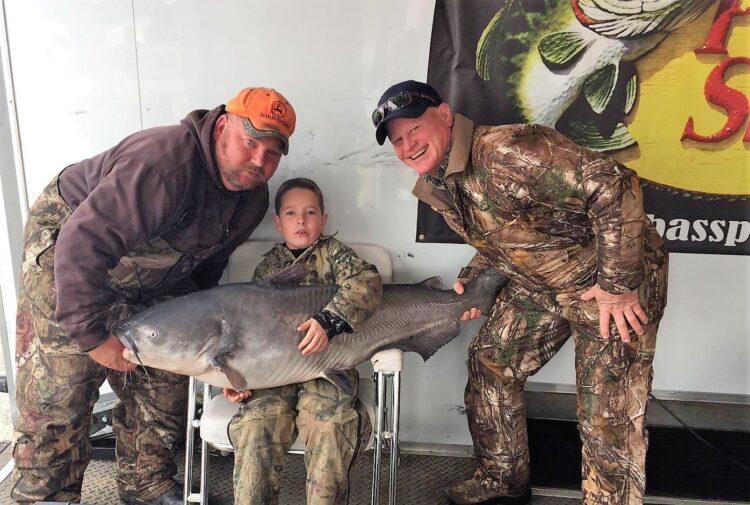 Perfect catfishing weather greeted Bass Pro Shops Big Cat Quest anglers for the March 18, 2017 tournament on the James River near Richmond, VA. The good weather followed some really cold, windy, rainy and stormy days. Anglers were pleased with the change for the better, because it is so often the other way around on tournament day.

“Saturday was a tad cold in the morning,” said BCQ competitor, April Lynne Self. “But, the day ended up being partly cloudy with low wind and it never got too hot. The weather was perfect.”

“We did have really low tides though,” continued Self. “They were probably some of the lowest tides we have seen. Low tide was around 2:30 in the morning and again in the afternoon. The day ended on the outgoing low tide.”

The BCQ format was hourly – meaning there were hourly paybacks, each hour of the day. The scales open at 8 a.m. and the last hourly weigh-in was the 2 p.m. to 3 p.m. hour. Anglers could fish the James River and its tributaries and weigh in 1 fish per hour. The overall winners were determined by the weight of their single best fish of the day.

When the weights had been tallied at Osborne Landing, it was 9-year old Michael Burruss claiming the top spot. He was fishing with his dad, Kenneth Bennett and last year’s James River winner, John Pappas. So, the same team was in the winner’s circle two years in a row. This year it was Michael who weighed in the 69.95 pound James River blue cat to win first place.

“It was 9:30 am,” reported Bennett. “We were on our 3rd set up and hadn’t had a bite. Then the Ugly Stick went down 4 times, about 5 inches each time. It looked like a small fish bite. I told Michael to reel down on the fish. When he did, the pole bent over big time.”

“Michael could barely hold on,” continued Bennett. “The fish took line for at least 10 seconds. Michael was holding the rod between his legs. Finally, the fish surfaced and I saw it was a giant.”

“Michael had to walk from the back of the boat to the front, over and over,” explained Bennett. “He would reel the line up as he walked back, because he wasn’t strong enough to pump the big fish with his arms. After about ten minutes, my partner John Pappas, last year’s winner, netted the fish. I immediately started coughing and gagging, I was so excited. I was so happy and proud.”

Second place went to April Lynne Self. She was fishing with her husband, Hugh Self and her grandson, Isaiah Dickerson. They are all on the same boat, but in the hourly format they are in competition with each other. On this day, it was April with the luck. She reeled in a 65-pound blue cat to claim her spot in the final hour of the day.

“Actually, we had a really slow day,” reported April. “We had a variety of baits on board. We had skipjack, gizzard shad and American shad (from MD which made it legal) and even some other baits. We tried fishing deep, shallow, main river, the barge pit, everything. We got nothing, until my grandson caught a 5-pounder that we brought in to the second weigh-in.”

“After that we thought we would just sit on the deep hole near Osborne Landing for that last hour,” said April. “We had marked fish there earlier, but no bites.”

That last set turned into pay dirt for April. “I had chosen one of my favorite baits, a gizzard shad cut that we call a “Jethro bait. About 2:30 p.m. we saw my line start going down. I got on it and as I would get him up, he would go back down. I finally got it close to the boat and he dove down again. I pulled up with a drag too tight and my rod broke, so I grabbed the line. Thankfully, he didn’t go far and my husband was able to net him.  We knew he was a big one, but wasn’t sure how big.”

“It was a blessing,” declared April. “It felt like God just blessed us with that last-minute fish!”

David Smith credited his third-place finish to having the right bait. “My biggest thing was getting the right bait for this time of year,” explained Smith. “The hickory shad are coming in, and I knew from previous years that I had to have some. So, on Thursday before the tournament I spent all day looking and no luck. But, Friday afternoon I found some.”

“On tournament day, where other people were catching one or two fish, we were throwing twenty- and thirty-pound cats back,” reported Smith. “We never found the big one we wanted, but we sure caught plenty.” Smith weighed in a 53.30 pounder to take the third-place spot.

The next regular season tournament will be 04/29/17. It is a Wounded Warrior Event at Clarksville, Tennessee on the Cumberland River. For more information visit the Big Cat Quest website or their Facebook page.

For more information on the Richmond area visit the website at visitrichmondva.com.