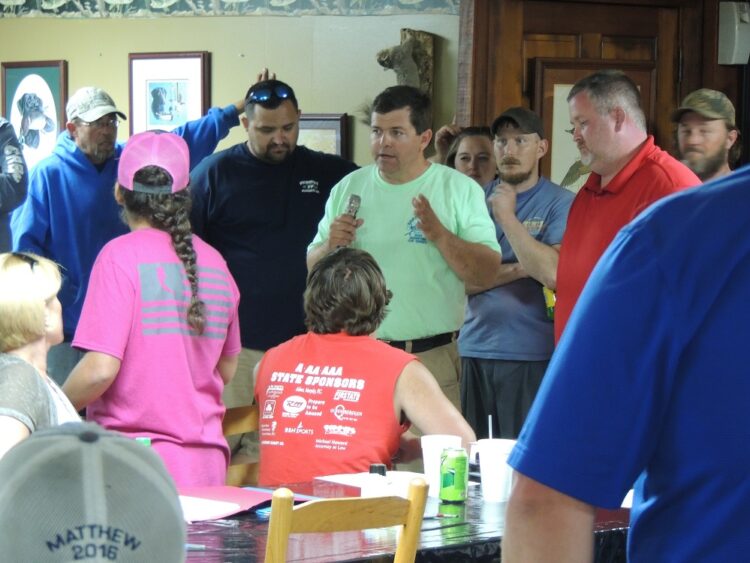 Blacks Camp was the perfect venue to kick off the inaugural Santee Cooper Monster Cat Quest, where a buffet dinner and registration kicked off the proceedings. More than 70 teams from numerous states made the trek to Santee Cooper Country to fish the popular catfish lakes.

Prefishing was characterized by great weather, right up to the day before. Anglers will face a little inclement weather as the tournament kicks off today, March 31, 2017.  Most had developed alternative strategies based on weather that appeared to be changing for the worse.

Prefishing reports ran the gamut from plentiful fish to having a tough time. One team reported catching numerous 40 pounders. Based on the fact that competing teams can weight in 4 fish with no size limit the team predicted that it would take 160 pounds a day to win the two-day event.

On the other side of the scale was a report from a local angler that took out-of-town-friends fishing earlier in the week, They reported only catching a gar and one other undesirable fish. Since this report was given before the tournament it must be taken with a grain of salt. We will be watching to see how these teams do in real time.

Thunder rolled through the night and heavy rain peppered the area to challenge anglers’ attempt at rest. The expectation of high winds and probably caused a sleepless night for many as they envisioned new strategies for changing weather. Saturday is supposed to be better weather wise, but the effect of the moving front on the fish won’t be known until the final weigh-in.

Whisker Whackers and CatfishNow sends wishes of good luck and safe fishing to all the anglers as they chase the whiskered critters on the Santee Cooper Lakes of Moultrie and Marion.

The weigh-in will be held at Black’s Camp. Fishing ends 4:00 pm and anglers must be in the weigh-in line by 5:00. The public is invited and welcome to attend the weigh-in.

You can stay up to date on Monster Cat Quest activities by following them on Facebook.