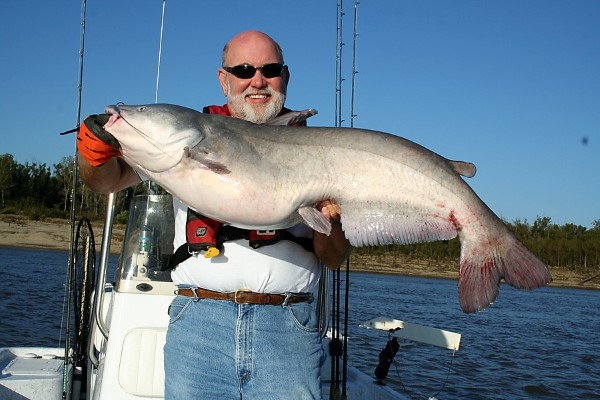 Find your own, don’t depend on others.

James “Big Cat” Patterson has been described as one of the grandfathers of catfishing. He is widely recognized for his seemingly never ending knowledge of catfish and an in-depth understanding of the rivers he fishes.

The 69-year-old catfish angler was born and raised in Henderson, TN, but has lived in the Memphis, TN. area since 1976.

Patterson has been instrumental in bringing the sport of catfishing to the public’s attention. “James Patterson has continuously tried and tested new ways and techniques to catch catfish,” said David Magness, a friend and fellow catfish angler. “One technique that he has mastered is what he calls controlled drifting. Most people call it bumping or back bouncing. You can learn more in a day with him than years of fishing on your own.”

“…the slaughter of the bigger mature fish is just stupid.”

“When James Patterson’s name comes up in a conversation, catfish quiver in nearby waters,” suggested Lyle Stokes, cohost of Catfish Weekly. “James has, for many years, been one of the top guides in the sport. He is also a top competitor in tournament angling. What makes James an icon in the sport is his willingness to spend countless hours visiting with people, helping them by answering questions and sharing his catfishing knowledge. His name is synonymous with catfishing.”

“I have been addicted to fishing as long as I can remember,” reminisced Patterson. “But, due to my Dad having to work 6 days a week and about 75 hours a week there was little time for fishing. I had to wait until I was older and could go by myself. Later on, my dad quit working so many hours and he and I would fish together. He really enjoyed the sport until his health failed.”

“Big Cat” does not point to a single individual that influenced him most with respect to fishing. It is something that is in his blood and driven by the challenge. “I have had friends and relatives that enjoyed fishing,” said Patterson. “But, for me it is just a driving desire to catch fish. Since I was about 12 years old it has been a challenging activity to encounter the fish. I really enjoyed trying to understand fish and come up with some idea to catch them that was different than what was used in the past.”

He began his catfishing career on the Tennessee River about 1960. “We fished with 5-foot solid fiberglass rods with wooden handles,” recalled Patterson. “We drifted and anchored much like we do today. I now spend most of my fishing time on the Mississippi River after moving to Memphis in 1976.”

There is no doubt that “Big Cat” loves the sport and has always been an innovator. “I would describe my passion for fishing as a 7 or 8 on a scale of 1 to 10,” acknowledged Patterson. “I have specialized in catfishing and most of the time and I am after trophy size fish. I was one of the first to rod and reel fish the Mississippi River during the Winter. It gives me a great thrill when I find the fish and then catch him.”

Patterson gained his fishing skills the old fashion way. He earned them. “I am pretty much a self-taught catfisherman,” recollected Patterson. “I started fishing at a pretty young age, but I didn’t start fishing the Mississippi River until I was about 30 and at that time there were very few people that knew or would give info on fishing the river. I learned by trial and error. A lot of ERROR! Today there is so much info available, that some guys do very well after a year of fishing the river.”

Patterson has had many good days of catfishing, but even he has a favorite. “The first good day I ever had on the Mississippi River was a 7- to 8-hour day. The whole day was passing with no luck. Then I anchored at the head of a deep hole. The first thing that happened was my anchor broke loose and I drifted back to where the anchor hung in a tree top. Once it hung up I tried to get it unhung with no success, so I just decided to sit there. In 30 to 45 minutes, I caught 5 fish that weighed 93 pounds.”

Another example of a good day shows just how much patience plays in the game of fishing and why anglers like the Big Muddy. “On another day I also had fished over half the day with no luck. The next hole I anchored on produced big time. In less than 4 hours I caught 30 fish that weighed about 320 pounds.”

“The good stories go on and on,” said Patterson. “But, I also have had my share of bad luck days. The worst was a tournament. Bill Dance, Benny Lendermon and I were fishing a 2-day championship tournament at Memphis. I never caught a fish in 2 days!”

Patterson’s conservation values favor Catch-Photo-Release (CPR). “I really hope that the catfishing world will follow the bass fishing world by using CPR,” declared Patterson. “I really hate to see the big trophy fish killed. I do believe in keeping a few fish to eat, but the slaughter of the bigger mature fish is just stupid. Sport fishermen can damage this great fishery by harvesting the trophy cats!”

“Anglers should enjoy the sport of catching trophy fish,” said Patterson. “Then they should handle them carefully, take a quick photo and then get them back in the water ASAP. Fish don’t like breathing in air any more than we like breathing in water!”

With respect to fishing with kids, Patterson encourages it, but offers a simple rule. “Fish for the child and not for yourself.” He advises using a lot of patience when fishing with children, and don’t keep them out all day unless they really want to stay.

“I think most of my friends would describe me as a teacher of the sport and a catfish conservationist,” offered Patterson. “I am honest about the products I use and the fish I catch. I would like to be remembered just like that.”

“If I could do things over, I would like to have started in the business of catfishing as a guide. I could have spent more effort helping to conserve catfish and in general, promoting the sport.”

“I just love to catfish,” concluded Patterson. “It is just exciting to catch just about any fish. I also like to tinker with many of my ideas and wish I had more knowledge to have marketed some of my creations. Some of the things I have made to improve my fishing was a flop, but some worked great. I have learned a lot by my mistakes. A few have copied my creations and I wish them luck. I am getting too old to get out and compete in the rat race. I had just rather go fishing.”

“I have no idea why I have such a passion for fishing or why I love it, other than the desire to learn on my own and not depend on others. I believe that is the most rewarding part. I will continue fishing as long as my health will allow.”