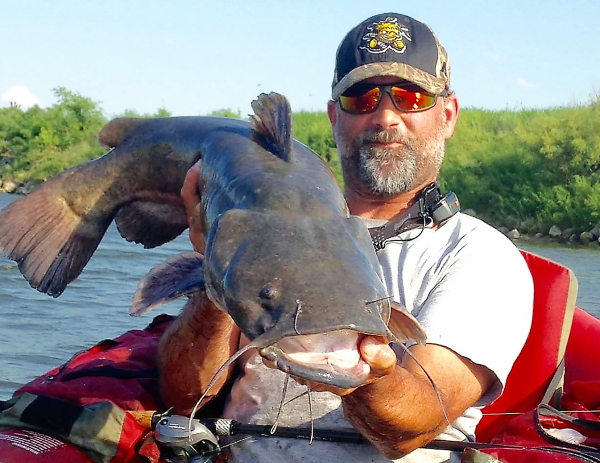 “I had miraculously landed a near 40-pound flathead on an ultralight outfit with 8-pound test line!” Those are the words of Keith Severns as he described the event that launched him on a journey of catching catfish, especially flatheads, on artificial baits.

“I was crappie fishing from my float tube,” explained Severns. “As I jigged a large laydown with small soft plastics my rig got absolutely crushed. It jolted my body like I had never felt before.”

Forty-five minutes later Severns had managed to land a beast of a flathead on light tackle. It was 12 years ago, and Severns has not looked back as he pursues his passion for flatheads on artificials in the Wichita, KS area and beyond.

“This one event changed my entire outlook on fishing,” continued Severns. “It actually changed my whole life. All my fishing since has been devoted to pursuing this incredible species. Understand, I don’t exclusively use artificials. Some conditions call for more traditional methods. Examples would include when the water color turns milk chocolate, when it runs super-fast or becomes very high. I will, however, use some form of artificials in 70 percent of my flathead fishing.”

“I want my offerings to be as tantalizing as possible . . .”

He does it, not because it’s easy, but because it is rewarding. “Using artificials is usually tougher than using live or cut bait presentations, but I love the challenge,” declared Severns. “I find it far more rewarding to unlock the flathead’s everchanging and moody behavior by actively hunting them down in a float tube and fooling them with fake lures.”

He is realistic in the pursuit of flatheads on fake baits. “Artificials are no magic solution,” warns Severns. “Fooling them with fakes can oftentimes take more patience and more time than live-bait fishing – but then again, the opposite can hold true. Artificials are just another tool in the flathead arsenal and there is a time and place for everything.”

Severns begins most days in an attempt to pattern the fish. “Sometimes the fish will be picky or moody and one particular style may match their mood and help unlock the puzzle for that particular day,” explained Severns. “Unlocking that puzzle is the challenge. Depth, presentation and timing are far more important than the plastic itself, but it is often wise to be prepared to mix it up with different offerings.”

“Once you can envision yourself hunting like a Flathead, and you begin to figure out the timing issues of this crazy species, then you will slowly, but surely, begin to get better at hunting flatheads down instead of waiting for them to come to you.”

Location is an important part of the patterning. “I jump around a lot,” said Severns. “I have to in my area, which is mostly in and around the city limits of Wichita, KS. There are a lot of fishermen here and not a whole lot of waterways to accommodate them.”

“There is a lack of conservation-minded people here,” offered Severns. “If you throw a flathead back around here, people look at you like you are crazy. They just don’t understand the importance of trying to maintain balance among the various year-classes of fish. With the heavy pressures and relentless takings, by all manner of methods, it has become hard to find concentrations of flatheads, especially the big specimens. This is why I am constantly jumping around and searching every nook and cranny for that next beast.”

Severns does most of his searching in a float tube. “I have found that there is no stealthier weapon for creeping up on my quarry, especially in shallow water situations, than my float tube. I use it to intercept them on their feeding routes or to circumvent and dissecting ambush spots such as a chunk of cover like a logjam. I can do it all with stealth in a tube.”

Ease of transport also helps Severns in his search. “The tube is very lightweight and small, which is great for long walk-in situations. I can reach remote, wooly, or overlooked locations where most others do not want to venture.”

“I love searching and fishing all kinds of different waterways, including rivers, lakes, watersheds, sloughs, floodwater canals, reservoirs, and sandpits,” revealed Severns, “I would have to say creeks are my favorite and best suited for the float tubes. I wouldn’t want to be out on the Mississippi River in a float tube, but I would sure work the heck out of all of its feeder creeks.”

As far as equipment for flatheading with artificials, Severns is limited to carrying 2 poles when on the float tube. “I try to cover all my artificial bases and a wide range of weights through my selection of rods,” explained Severns. “I accomplish this to the best of my ability by using a light, but strong spinning reel for smaller plastics, spinners, crankbaits, or any other finesse-style presentations. I can throw anything from 1/8th ounce up to 1 ounce lures.”

“My second set-up is a baitcasting reel that lets me cover everything on the beefier side of the spectrum. This would include things such as my huge soft-plastics, big jigs, saltwater chattetbaits w/plastics, umbrella rigs, big crankbaits and swimbaits. Basically, any artificials from 1 ounce to about 6 ounces.”

Severns explains that he loves artificials for flatties, because of the wide variety of ways that anglers can manipulate them to match the mood of the fish. He believes that proper presentations can garner reactions from either passive or aggressive fish. The possibilities for plastic baits are endless, but so is their potential, according to Severns.

“You can use low speed/ high speed change-ups,” offered Severns. “You can use pauses, you can use erratic twitches, flutter falls, vertical jigging, crawling, hopping, swimming, dragging, yo-yoing, deflections off cover, suspending techniques under floats, and on and on. All of these strategies can be exaggerated to stimulate instinctual or reactionary strikes. If you stay persistent and stay confident, you will eventually cross paths with an active, or at least swayable flatty.”

Severns’ system is all about work, work, work, and staying on the move and working over as much water and as many potential flathead hotspots with as many different presentations as you can in an outing.

Some baits come pre-scented, but Severns likes to add his own. “I love playing with various scent concoctions as part of an overall strategy,” added Severns. “I love to incorporate tantalizing scents to make my offerings seem even more alive and irresistible. I want each offering to be as tantalizing as possible, and appeal to all of a flathead’s senses. Most of my plastics are constantly marinating in various concoctions of my own mixtures,” revealed Severns.

He uses a lot of the same plastics that are used to catch a variety of common fish species. “The only difference,” states Severns, “is that with the flatties, I often try to find up-sized versions such as saltwater plastics, porks or just find obscure plastics that others aren’t throwing. Plastic lures can be used standalone or used as trailers on the back of big jigs, chatterbaits or spinner baits.”

Part of Severns passion relates to telling others about the possibilities. “I find it very rewarding to educate people on the similarities flathead catfish are to other predators,” instructed Severns. “Flatheads are not the bottom-dwelling trashy ‘mudfish’ that many believe them to be. They are willing to attack a wide variety of artificial baits at all levels of the water column.”

“By telling and showing people what an incredible sport species we are dealing with, I hope to bring more respect to the flathead catfish,” offers Severns. “With respect will come more of a catch and release mindset from ethical anglers. It is especially important to take care of the bigger specimens that take so long to grow to trophy size. The trophy fish are too important to maintaining and passing on the higher quality genetics. This species deserves at least the same amount of respect as bass, striper, musky and other trophy fish.”

“The flathead species is one of the coolest predators on the planet,” concluded Severns. “Please spread the word of wide selective harvest. Let’s take good care of those upper-level class flatties. Lets’ make 100-pound flatheads a common occurrence in this country again!”

Severns’ Equipment Picks
Severns’ spinning gear is a Shimano Stradic C14+ model C3000. It is small, lightweight, and silky smooth with incredible strength. It features a strong drag system with a 25-pound rating. The Stradic is paired with a 7-foot, medium/fast action Fenwick HMG (high modulus graphite) rod. He spools up with 65-pound Power Pro Super Slick 8 for the main line, and 30-pound Ande monofilament leaders.
His heavy-duty set-up includes an Okuma Coldwater 350 Low Profile baitcasting reel. He describes the reel as small and lightweight, yet incredibly strong. This reel also has a drag rated at 25 pounds. Severns will not use anything with less than 25 pounds of drag. “This Okuma has performed flawlessly and smoothly, while throwing a wide range of offerings and reeling in giant fish,” reported Severns.
The Coldwater 350 also comes with a very nice clicker, so it can do double duty when he wants to switch to live or cut-bait fishing. This reel is also equipped with a line counter that can be used as a quick depth finder and also good for drifting or trolling to know your exact how much line is out.
Severns chooses the 8-foot, medium/heavy, fast action, Musky Series Legend Tournament Rod by St. CROIX for his heavy-duty rod. He dubs it “the nicest rod I have ever owned.” He says it has amazing sensitivity combined with ridiculous strength.
He spools up with 80-pound Power Pro Braid for the mainline and 40-pound Ande monofilament for his leaders. “I use mono leaders on everything,” advised Severns. “I love the little bit of stretch for shock absorption and also the abrasion resistance in rocks and wood.”
“There are a lot of other rods and reels out there that can get the job done,” concluded Severns. “My main advice would be to stick to that heavier drag-rating of at least 20 to 25 pounds of drag.”