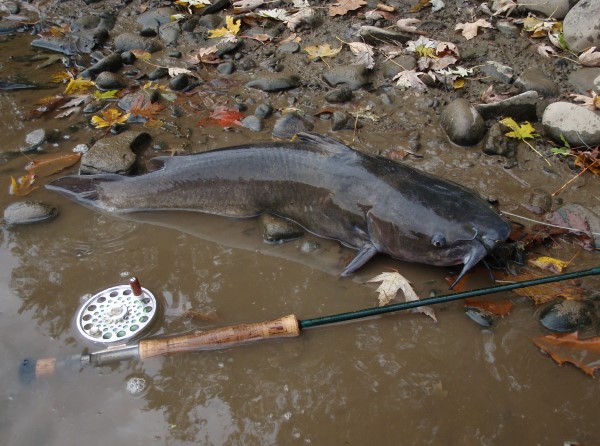 Fly fishing strategies for catfish in rivers and their tributaries

Fly fishing has come a long way. Not too long ago fishing with a fly rod was the sole domain of the trout angler, but with improvements in fly rod design, fly line types, and fly tying materials, warmwater fly fishing has become the new frontier for long-rodders.

While smallmouth bass, musky, and carp garner a lot of attention from anglers who ply “brown water” these days, those same anglers are likely to cross paths with gamefish of the whiskered kind, particularly on the larger warmwater rivers. Indeed, my first fly fishing grapple with a catfish was while fishing a #6 Murray’s Dying Minnow streamer for smallmouth bass on the Chemung River in upstate New York.

As I stripped the streamer across and down current, my fly suddenly stopped and what I initially thought was a snag turned out to be a large channel catfish. A 30 minute tussle on a 7 weight fly rod was all I needed to convince me to start actively targeting these tough gamefish.

Of all of the species of catfish, the channel catfish is the ideal candidate for the fly angler. They are found in abundance in rivers, reservoirs, lakes, and ponds, but it is flowing waters where habitat depth is most amenable to fly fishing techniques.

Channel catfish live in a variety of habitats, including large creeks, streams and rivers and their tributaries. Adult channel cats prefer pools that feature deeper water and slower current. While they associate well with cover such as large rocks, logjams, or debris piles, channel cats can also be found in areas without a lot of cover. They will hold below dams and riffles or other structures that might slow or obstruct river current. The mouths of tributaries, where smaller creeks enter larger rivers, can also provide good habitat.

Seasonal conditions can challenge the catfish fly angler. For example, the spring pre-spawn bite can be excellent. Channels move upstream in spring and hold below dams and riffles or other structures that might slow or obstruct river current. The mouths of tributaries, where smaller creeks enter larger rivers can also provide good habitat.

Spring however, can provide poor conditions for fly fishers if rivers are high and dirty. Where river conditions are bad, look to smaller waters such as river tributaries where the water may not be as discolored or high.

In summer, channel catfish can be found in the holes of streams and rivers as well as in mid-depth runs. River stretches with wood cover are particularly good, especially logjams. As waters cool in late fall, channel cats will move to wintering holes, especially in northern regions. Movement is often downstream. As with spring, these deep water lies can challenge the fly angler. Fly fishing from a boat can greatly improves access.

Fly tackle choice need not be expensive, but must be good quality. An 8 to 9-foot fly rod rated for a 7 to 9 weight line is ideal. Catfish are very hard fighters, especially in current, so having a rod with a fighting butt allows better leverage and rod-lifting ability when fighting the fish. Fly reels should have a disc drag system to handle long runs and to help put the brakes on fish caught around structure.

Since catfish are bottom oriented, an intermediate sink tip, full intermediate sinking, or sink tip fly line will work best. Many anglers will have one of each line type to fish a variety of river conditions. Like the tackle that is used, leaders need to be stout. A 5 to 7 foot tapered leader with tippet rated at 1X or stronger is best. With every item of tackle, scale up or down depending on the size of the water being fished.

“A 30 minute tussle on a 7 weight fly rod was all I needed to convince me to start actively targeting these tough gamefish.”

Catfish are omnivores and will feed on small fish, minnows, crayfish, leeches, hellgrammites, large nymphs, and even terrestrials. They will also feed on mulberries and aquatic vegetation. Despite their diversity of forage, fly choice can be simple. The venerable wooly bugger in natural colors of black, brown, dark red, and olive will work well and will imitate many of these food sources.

Weighted versions help in deeper water. Other good patterns include clouser minnows, leech and crayfish patterns, and large aquatic nymphs. Flies should always be on the larger side – anywhere from size 6 on up to a 1/0 or 2/0. I like to use wooly bugger-type patterns with rubber legs and a little flash to add movement and visibility to my presentation. When fishing in murky conditions, be sure to fish a larger profile fly in very dark or very bright colors.

There are two general fly fishing strategies for channel cats: blind fishing and special situations. Blind fishing is a matter of thoroughly fishing preferred catfish habitat. Channel cats will often be found feeding at the head of a run just below a riffle, for example. In this feeding station, channels can take advantage of a reliable food stream of large aquatic nymphs, hellgrammites, mad toms, sculpins, and minnows as they are washed from the riffle to the deeper water below.

Casting the fly of choice into the riffle and mending upstream so the fly sinks deep, dead drift, can be very effective. Working the entire head of the run this way and then continuing to work down to the deeper water in the pool can also produce fish.

It pays to work the fly deep. If you’re occasionally hanging up on bottom or feeling the “tick” of the fly as it skirts the river bottom, you’re fishing correctly. It also pays to fish around structure such as bridge abutments, the base of falls, downfalls, and stream and creek mouths. The tailouts of large pools can produce good numbers of fish, particularly during daybreak and again at dusk. Don’t be surprised to see channels cruising shallow water in the quest for forage.

Special fly fishing situations are tied to natural events. Examples include large aquatic insect hatches, the aftermath of a sudden thunderstorm where forage may be washed into the watershed, spawning events, and even the dropping of mulberries and other vegetation from bankside plants and trees. In the northeast, for example, the annual white fly hatch in July and August can cause blizzard-like hatches towards dusk where thousands of these large mayflies emerge, mate, lay their eggs, and fall to the river surface and die. Catfish, along with bass and carp will often key in on this huge bio-mass of food and feed voraciously, allowing fly anglers to catch them with nymphs and even dry flies.

The spring carp spawn in many river systems can also set up a situation where channel cats, feeding on eggs that have been washed into the current, can be caught on salmon egg flies, much like steelhead that feed behind spawning salmon. Keying in on special situation fly fishing opportunities requires local knowledge, precise timing, and a bit of luck, but when a “pattern” is found, the fishing can be truly outstanding.

One such special situation occurred for me on a Labor Day weekend on the Susquehanna River. The river was in prime condition and cooler mornings caused the river valley to be steeped in fog for hours in the morning. As low light conditions make for great fishing, I decided to fish a river tailout that had produced large smallmouth bass in previous years. When I arrived at my spot, I could see boils and water movement that hinted at fish feeding. I cast a large wooly bugger across the tailout and let it swing in the current, stripping it slowly. After a few casts I was into a fish – the first of 4 very large channel cats that hit my fly aggressively on the swing.

I returned the following two mornings and caught more big channel cats. The next year I fished this same area under similar conditions and repeated my good luck. But what I eventually realized was that these catfish were not feeding on baitfish, but on a large mahogany mayfly, similar to Isonychia, as they emerged as a nymph to float, break out of their nymphal shucks, air their wings, and fly away to mate. My streamer did not imitate the mayfly in any way, but being opportunistic feeders, these channel cats could not pass up an even larger morsel struggling across river.

They may not be as pretty as a rainbow or brown trout, or as acrobatic as a smallmouth bass, but channel catfish afford the warmwater fly angler a shot at a big gamefish with the pull of a locomotive. Not only will these fish put a deep bend in a rod, and show you the backing, but they will also surprise anglers in the myriad ways they can be taken with the fly.