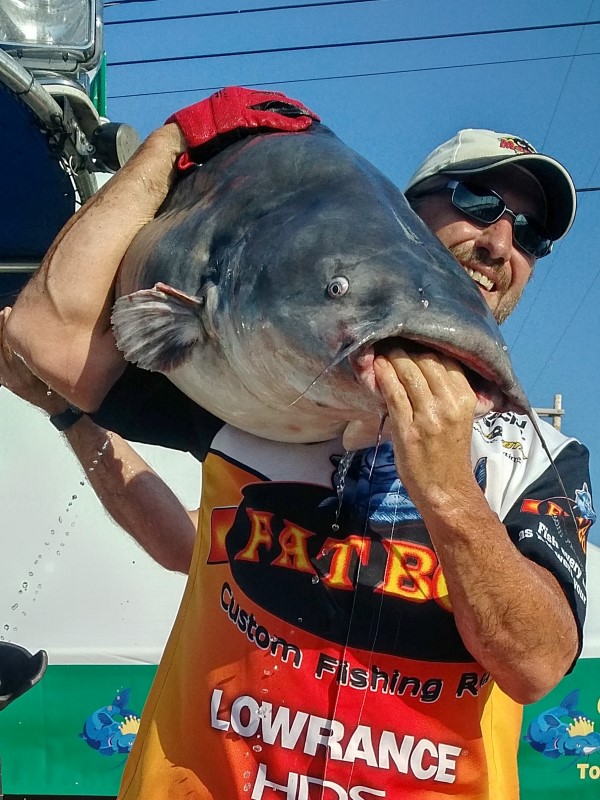 Keeping a positive outlook on life

It was a flathead catfish that caught Carl Morris, Jr’s attention and hooked him on catfishing. He grew up in Johnstown, Ohio before moving away for work. Now, for the last ten years, he calls Johnstown home again.

Morris has had a passion for fishing that dates back to the days when he waded the Licking River in Ohio, catching rock bass with his dad. “I started fishing farm ponds and local lakes around central Ohio, but it was when I caught my first flathead, out of the Muskingum River, that I got hooked on catfishing. I was about 16-years old. I was used to catching bass and crappie, but feeling the fight of a big catfish was what I wanted after that.”

Morris credits his father and stepfather for getting him started in fishing. “My father is responsible for a big part of my passion for fishing,” said Morris. “But, it was my stepfather, Paul, that kept me interested. He would take me fishing on the weekends when he had the chance. He is the one who taught me about catfishing, catching bait and rigging. He gave me my first experience in catfishing. I would say I owe my passion to him for taking the time out of his work schedule to take me and teach me how to fish the rivers for catfish. I always looked forward to fishing with him, as we always caught the big fish when we would go!”

Once that desire to catch catfish began, he would fish after school on weekends and anytime he could, usually with friends and family. “We were the only high school kids who would get up before daylight to walk to the farm pond we fished in our hometown of Johnstown, recalled Morris. “As I got older we traveled around Ohio fishing the bigger lakes and doing a lot of tent camping. We couldn’t afford much else, but to be truthful I kind of miss it now!”

“We started fishing small local catfishing tournaments and won a few here and there,” revealed Morris. “Then one weekend we were camping at a lake in Northern Ohio called Mosquito Lake. We walked into the bait store and saw a notice of a tournament that we had no idea about. It turned out to be a qualifier for Cabela’s King Kat Championship in Junction City, Kansas on Lake Milford. Well, we won that qualifier and thought we was good enough to go out to Kansas and fish it.”

Morris and his first partner, Jeremy Martin, saved money over that summer to make the trip to Kansas. “We still could not afford hotels, so we were tent camping,” explained Morris. “Well, we got out there and realized we wasn’t as good as we thought we were. We were legends in our own minds!”

There were 113 teams that had qualified for the Kansas King Kat tournament and Team Morris/Martin finished 109th. “Wow, was that an eye opener,” declared Morris. “We realized we had a lot to learn to be able to compete with those anglers.”

“I don’t always measure my best days by the fish I catch.”

That was likely the point that Morris committed himself to the sport. He wanted to learn everything he could to become a better angler. Since that time, he has fished all over the Midwest. Morris and his partners have fished all the major rivers including the Ohio, Mississippi, Missouri, Tennessee, Cumberland, Delaware, Potomac, and the James. They have also fished a number of the smaller rivers like the Chattahoochee, Alabama River, Warrior River, Monongahela and the Kanawha.”

Time on the water, fishing under various circumstances, taught Morris the many different types of fishing necessary to be a contender. “We prefer to drift fish,” reported Morris. “That might be suspending, dragging or back bouncing baits. Mainly, we prefer to keep our bait moving when we can. There are times where anchoring is better, but that is typically during the winter months when the water temps are cooler.”

As Morris aged he discovered that some of his best days are those where he has an opportunity to teach others about the sport. “Just being outdoors is a good day for me,” offered Morris. “Catching a lot of fish may seem like a better day, but I’m not sure that is always the case. I don’t always measure my best days by the fish I catch. I have had days where I would consider teaching and helping others as good of a day as the ones where I catch several big fish.”

“I find that as I get older I enjoy spending time teaching others the things I have learned over the years,” continued Morris. “I tell anyone to call me, anytime, and I will do all I can to help. I also enjoy speaking at seminars to educate anglers on tactics, sportsmanship and conservation.”

Morris gets a little philosophical when asked about his worst day? “I try and keep a positive outlook on life as it is to short not to,” exclaimed Morris. “The worst days for me is to see all the fighting and arguing that goes on in our sport. I feel it holds back the future of our sport, which I want to see grow in a positive manner.”

There is always negative things going on in our life, but if we only continue to focus on those we will all lead a miserable existence. I choose to deal with things in a more positive manner that will help promote the future of our sport. It means a lot to me and I want to be remembered as someone who helped grow the sport in a positive way.”

Morris’s philosophy on conservation and the resource comes from an upbringing by hunter/gathers. “We have, and always will be, conservation minded,” reported Morris. “Being fisherman, as well as hunters, we were taught the importance of being sportsmen at an early age. No matter if it was catfish, bass, deer or turkey. I have always been taught to value and appreciate the resource and not over harvest.”

“We even apply that viewpoint to the bait business we run,” continued Morris. “As an example, when the skipjack we provide through Big Kat Bait Company are spawning in our area we don’t fish them. We allow them to spawn out for the season and continue reproducing the resource.”

Morris believes that same philosophy is important to trophy catfish. “As anglers or hunters, we have the responsibility to apply good ethics to our sport or business,” advised Morris. “Catfishing has taken off and gained a lot of anglers over the past 10 to 15 years making it even more important than in the past to value the resources.”

Morris recognizes, as others should, that trophy catfish are not unlimited. “There is a lot of demand to harvest trophy catfish,” suggested Morris. “I have a lot of concern that regulations are not keeping pace with that demand. If not addressed properly we could face a severe shortage of large fish for many, many years to come. We all know 50-pound plus catfish do not grow that way overnight. It will take some time to rectify the damage that has already been done to some of our river systems.”

“I happen to live close to part of the Ohio River that has had an intense amount of harvesting pressure of big fish for the pay lake industry,” revealed Morris. “I can speak first hand of the decline in fishing. Even the guys who are currently harvesting the large fish have sought out other areas of the country to find them. Not that there isn’t a big fish left, as of course there is, but the number has declined so intensely over the years they are now much harder to come by. If the current practice continues I feel we will see an even further decline.”

“There is currently a big brouhaha between anglers on this subject,” worried Morris. “It typically leads to fighting, mudslinging and name calling on social media. I choose not to be a part of that public display. I don’t think it helps the situation. In fact, I feel that it has alienated some anglers from wanting to help and be a part of the solution. Instead, they keep quite as they do not want to be involved in that manner.”

“I am all for assisting to get helpful regulations pasted. Catfishing is my passion, but changing regulations needs to be done in a professional manner. A manner that people will be motivated by to help us get the numbers we need to pass new regulations for the future.”

“I realize everyone is entitled to an opinion,” stated Morris. “But, most people, in general, do not respond well to negative approaches. Instead they just disassociate themselves from the issue, period. We must get organized as a group to be able to professionally present our concerns, or no one will ever listen. Then we can all sit on social media and cry about what could have been, instead of trying to find solutions to overcome it.”

Morris has a lot of fishing and teaching in his future. “I always loved the sport, but as I have gotten older I also enjoy helping other anglers get started in catfishing,” reminisced Morris. “I have always operated in a teamwork environment, from playing sports, to business, to fishing. These experiences have taught me to help the ones around me succeed.”

“I plan on fishing as long as the good lord allows me to health wise,” concluded Morris. “I imagine myself old and gray with my walker, sporting some Monster Rod Holders and my Fatboy Custom Rods!”

Emanating from his passion for catfishing and his willingness to help others learn the sport, Carl Morris Jr. has earned Cabela’s King Kat Angler of the Year award four consecutively years, from 2012 through 2015.

Morris is now a partner in the Big Kat Bait Company (614-554-5556). His company provides fresh and frozen skipjack, shad and shad guts to bait dealers and anglers throughout the catfish community.