New Action from an Ancient Lake 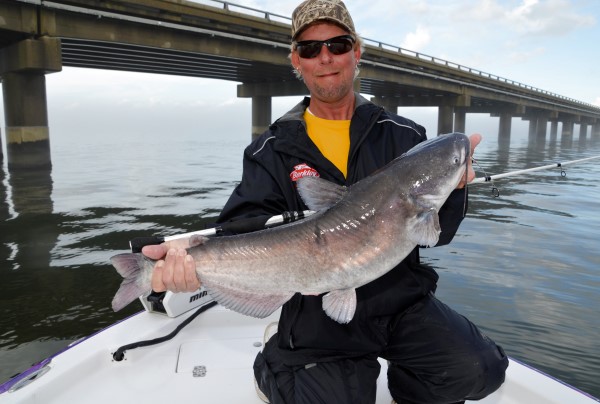 About 5,000 years ago, the Mississippi River changed course, trapping a portion of the Gulf of Mexico. Technically not a lake, but an estuary, Lake Pontchartrain near New Orleans measures about 41 miles from west to east and 24 miles from north to south at the widest point. The lake averages about 12 to 15 feet deep, but some holes drop to about 100 feet deep.

Since this big ditch brought water directly from the gulf, salinity levels rose in eastern Lake Pontchartrain. This greatly improved the fishery for speckled trout and other salty species, but not for catfish. When Hurricane Katrina struck in 2005, the mighty storm plowed right up the MR GO to New Orleans. To protect the city from future storms, the U.S. Army Corps of Engineers closed MR GO and built surge barriers at strategic places. With less salt entering the system, the big lake began to freshen, making it more like it was 50 to 100 years ago.

Since most area anglers focus on speckled trout and redfish, few people know that this excellent catfish fishery exists. Anglers frequently catch bonus blue cats while fishing for marine species, but people can fish for blues exactly as they would for redfish. More tolerant of salinity than other catfish species, blue cats and redfish generally feed upon the same baits, meaning practically anything they can catch and swallow. Nourished by fertile rivers flowing into it, the estuary produces an enormous amount of baitfish, shrimp, crabs and other prey species.

Whether fishing for reds or blues, place tempting shrimp, cut mullet chunks, crab halves, menhaden, strip baits or similar morsels close to the bottom near cover. Blue cats and reds also devour live finger mullets, but share a particular fondness for soft-shelled crabs! Neither can resist a defenseless crustacean shedding its protective armor. Many anglers put out several rods with different baits to see what works best that day.

Kreeger uses a Carolina rig with an 18-inch leader for fishing bait on the bottom. He usually anchors the rig with a 3/4-ounce lead slip sinker, but may use a 1-ounce chunk when fishing during a strong tide. On the terminal end, he threads a shrimp on a long-shanked J hook, but many anglers prefer to fish bait with a circle hook.

Few people deliberately toss lures for catfish, but the big predators sometimes attack soft-plastic grubs, shrimp or minnow imitations and other artificial baits meant for speckled trout or redfish. Sometimes, anglers tip lures with shrimp pieces for extra flavor and work them slowly along the bottom.

“Catfish are very aggressive predators,” explained Dudley Vandenborre, (985-847-1924), who guides out of Slidell, La. “I never go out looking for catfish, but we catch a lot of them while fishing plastics for speckled trout and redfish. On one cast, we might catch a 15-pound catfish. On the next cast, we’ll catch a 5-pound trout and then a 10-pound redfish, all on the same lure. The biggest catfish we’ve ever put on my boat weighed 32 pounds and hit an avocado Deadly Dudley soft plastic bait.”

A Bridge Not Far

For just about any species, most people fish the bridges spanning the lake. The Lake Pontchartrain Causeway, the longest bridge continuously over water in the world, crosses the massive estuary from north to south at its widest point. Farther east, the Interstate 10 bridges, also called the Twin Spans, cross Lake Pontchartrain near Slidell. Generally parallel to I-10, the U.S. Highway 11 bridge dates to 1928. A nearby railroad trestle dates to 1884.

Thousands of barnacle-encrusted bridge pilings create abundant habitat for catfish and many other species. Pilings provide cover from the surface to the bottom and often attract shrimp, crabs and small baitfish. Tides scour out doughnut-shaped holes at the base of many pilings. Catfish drop into the holes, looking into the tide to watch for bait to wash over them.

Anglers can also find good catfishing in the Pearl River system, particularly when winds whip the huge, open lake into a frothy caldron. Flowing out of Mississippi, Pearl River splits into two near Talisheek, La. West Pearl carries the major flow southward from that point while East Pearl continues down the state line. Between the two main rivers, numerous tributaries create Honey Island Swamp. West Pearl River also splits into two mouths. One flows into the Rigolets and the other into Little Lake, an estuary close to Lake Borgne.

“The two mouths of Pearl River are good places to fish for cats,” Kreeger recommended. “A lot of big freshwater shiners come out of the rivers. Catfish probably follow the shiners and feed upon them. We anchor in the mouth of the river, drop some baits into the water and sit there waiting for catfish. I’ve hooked some that broke my line. I never saw them so I don’t know how big they were.”

Almost anywhere in this system, anglers might find some line-stretching action. For the best catfishing action, look for the lowest salinity levels. Heavy rains swelling rivers and streams flowing into the system sweeten the waters. In addition, extreme low tides, such as those found in the winter when north winds blow water toward the gulf, can improve catfish action.

When salinity levels decrease, cats come out of the rivers into the lake. Then, catfish enthusiasts might battle whiskered titans with little competition as saltwater anglers wait for better times.

For area information, contact the St. Tammany Tourist and Convention Commission at 800- 634-9443 or see www.LouisianaNorthshore.com.