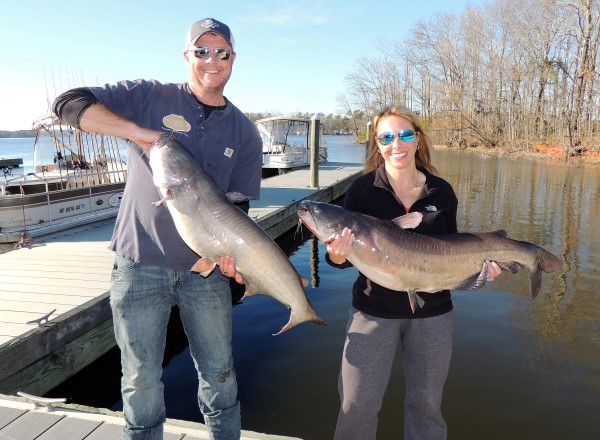 A Guest Editorial by Ray and Tracey Waldrop

Editor’s note: Forty-three-year old Ray Waldrop and 43-year-young Tracey Waldrop have a passion for catfishing. Ray grew up bass fishing with his dad and Tracey was introduced to catfishing by Ray when they were dating. Now they are catfish tournament partners, traveling all over in chase of the whiskered critters.

I grew up bass fishing with my dad in Lake Tillery, where my parents owned a place. I’m not sure how often we went, but it seemed like a lot. I would spend my whole weekend on the dock until my mom would make me come inside. My first experience with a catfish was catching bullheads off of that dock.

We later moved to Louisiana for a while and it seemed like catfishing was all they did. The real fun for me was the spoonbill catfish that were caught by snagging. I ruined a Zebco 33 and emptied out my tackle box full of treble hooks trying to catch them one day.

My real love of catfishing didn’t come until a friend of mine, John Dowd, invited me to a tournament where we boated some fish bigger than I had ever caught before. I thought we were going to do really good, but I quickly realized at the weigh-in that we were gonna’ have to do a lot better than a few 20 pounders.

I took Tracey catfishing for the first time when we were dating. She had been fishing before, but it was bass fishing. She had never even seen a catfish before that. We remember that first fish like it was yesterday because it was a very healthy and feisty 25-pounder that put up a heck of a lot more fight than anything she had ever caught in her life. She was hooked with the thrill from that point on.

She told me that she wanted to catch a real big catfish, one that she really had to struggle to get in the boat. We went to Santee Cooper one Memorial Day weekend. It was Tracey’s first time on Santee. She will never forget the feeling of the fight this fish had.

We had a 17-foot Jon boat at the time, and that fish was actually pulling our boat around in the water. She was talking trash to the fish the whole time, not really realizing exactly how big the fish was until she got the 40-plus-pound beast in the boat. It was almost as big as she was. Tracey says she thought I was going to have a heart attack. She was so excited, and to this day says, she is not quite sure that she can thoroughly convey how thrilling that experience was for her. Santee Cooper has become a sentimental destination for her.

There are lots of memorable moments, but my biggest would be when our youngest daughter caught a 50-pound blue cat. She had to have help to get it in because it was almost twice as big as she was. She held the boat record for a few years until Tracey surpassed it, but she is always looking to regain it.

Catfishing is a 24 hour a day, 365 days a year sport in our house. Every night there is messaging other fisherman, phone calls, YouTube, you name it, its going on at some point. Tracey will pass her passion for the sport on to whoever will listen because she would love for everyone to experience the enthusiasm, excitement and joy that she has for catfishing, so they are encouraged to take a shot at catfishing for themselves.

Being on the water is awesome. We appreciate the guys and gals that that show up and put the time in to catch these fish, especially those that have their kids/wife/husbands on the boat with them. That’s a cool deal!

Catfishing is mind clearing, it’s what we’re out there to do, it’s what we’re concentrating on 100 percent, and nothing else matters during that time. We love being on the water and not knowing what’s going to happen next. It could go from nothing to 4 rods downs at the same time, in a matter of moments.

There’s a lot of work that goes into it, from research, catching bait and trying everything you can to make that right first decision on tournament day. The #1 rule on our boat is to never ever give up, not until the last possible minute of fishing time. The other thing is to always weigh in your fish, no matter how big, because you worked hard for what you did get.

Friends are absolutely an important part of why we catfish. We’ve had the pleasure to meet so many good people from all over the United States because of fishing. We get pretty excited about seeing everyone before and after the tournaments. The trash talking, the competitiveness of everyone and the seriousness of something so simple.

The friends that we have made, that really feel more like family, and the camaraderie you feel when they all share their passion, knowledge and love of the sport are what really makes catfishing so much more than just fishing.

We put everything we’ve got into it when we are out there fishing. It is just a passion about every aspect of catfishing. It is pure enthusiasm for the research, the hunt, the rod going down and the fight. We are not just out there to catch a big fish – it’s the whole experience!