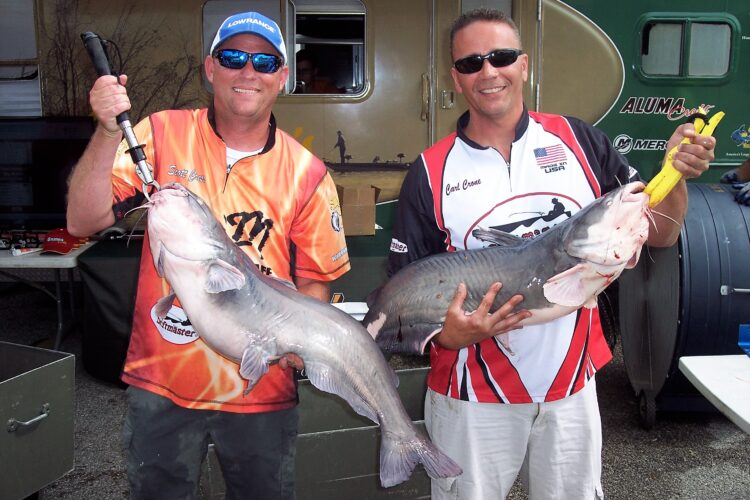 A river, dropping 5 feet in 24 hours preceding and during the May 20, 2017 the Cabela’s King Kat Tournament Trail made for some tough fishing. Anglers were fishing the Ohio and Wabash Rivers at Mt. Vernon, Indiana. Temperatures were in the low to mid 80’s with early morning rain and scattered thunderstorms throughout the day.

Results for the Top Teams

The B’n’M Poles team of Scott Cress, Covington, Kentucky and Carl Crone, Villa Hills, Kentucky accepted the weather challenges and claimed first place of the tournament. They weigh in 91.16 pounds and earned $3,000.00, plus an additional $300.00 DriftMaster Rod Holder Bonus.

The team fished near the weigh-in site on the Mt. Vernon, Indiana riverfront. They drifted in 40 – 60 feet of water. Skipjack was the go-to bait for the first place team. Interestingly, they stated that the heads worked best during practice, but did not during the tournament.

Cress and Crone landed 20 fish on tournament day. They stated that fish were tough to pattern due to the falling water. The team’s win was a repeat. They also won the Mt. Vernon event in 2016!

Taking second place were Aaron Wheatley of Owensboro, Kentucky and Rusty Morris of Lawrenceville, Illinois. The SeaArk team weighed a total 84.02 pounds and earned $1,200.00, plus an additional $620.00 for Big Kat of the event. Their Big Kat weighed 31.26 pounds.

The team fished in the Diamond Island/West Franklin area about 10 miles north of the weigh-in site. They targeted a river ledge with fish holding in 35 – 40 feet of water. Wheatley and Morris used skipjack for bait while drifting to land 10 fish for the day. Wheatley stated that the current dropped since the beginning of the week, which played into their hand since they were drift fishermen, not bumping fishermen.

Carl Morris, Jr. of Johnstown, Ohio and Rob Parsons of Mt. Vernon, Ohio took third place weighing in at 78.04 pounds and earned $400.00. The team fished below the J.T. Myers Lock and Dam targeting ledges with fish holding in 30 – 35 feet of water. They stated that the fish during practice were not there during the tournament, and that the fish were moving around quite a bit. The team used the bumping method to catch 5 fish for the day. They also had 2nd place Big Kat of the day, weighing in at 27 pounds.

In fourth place were Stephen Fancher and Mike Greenwell, both of Evansville, Indiana weighing in at 74.6 pounds and earning $300.00. The team anchored up just a few miles upriver from Mt. Vernon. They targeted ledges in 35 – 40 feet of water using skipjack and shad for bait. They landed 10 fish for the event. When asked which worked better for them the team stated they didn’t know because they ran out of skipjack and had to start using the shad!

Chris Souders of Oak Hill, Ohio and Nick Conaway of Lucasville, Ohio took fifth place with a total weight of 72.38 pounds and earned $200.00. The team fished upriver from Mt. Vernon, bumping skipjack along ledges in 30 feet of water. They landed 17 fish for the day. They said that the fish they had found pre-fishing had moved over night due to the current dropping.

King Kat organizers sent a special thank you to the City of Mt. Vernon for hosting the event and making everything possible and to the Police and Fire Station for the use of their facilities. They also thanked Hawg-N-Sauce for catering the registration and captains meeting. A special thank you to Junkerz Power Equipment for providing UTV’s at the weigh-in. “We are so grateful to have Mt. Vernon, Indiana on our schedule,” said tournament director Jeremy Coe. “Not only is it a great place to fish, but it is also a wonderful place to visit. The entire town is friendly and accommodating and we cannot thank the community enough for all of their support! We look forward to returning next year!”