Stephens, Stephens and Diehl win King Kat on the Rock 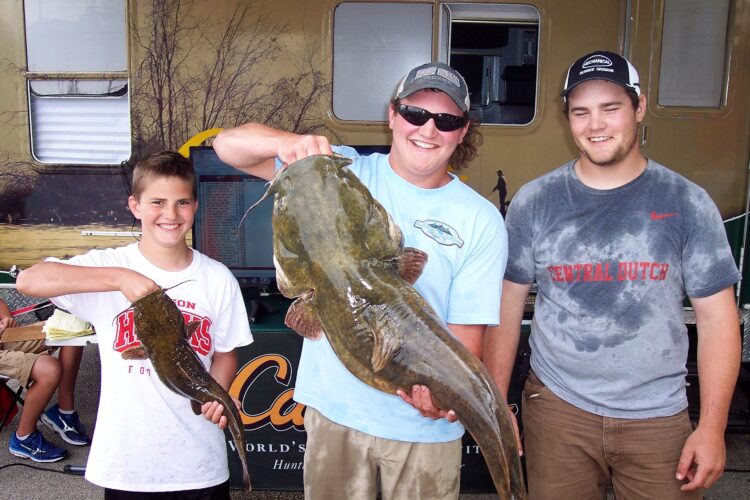 Catfish anglers were greeted with a swift river, a few feet above normal for the June 3, 2017 tournament event on the Rock River at Dixon, IL. More than 100 anglers from 8 states, were competing for $9,300.00 in cash and prizes, and the opportunity to qualify for the 2017 Cabela’s King Kat Northern and Southern Championship.

River conditions made for a tough bite as the water level was high but falling after a great deal of rain and flooding. Temperatures were in the low 90’s with sunny skies and wind speeds at 10 – 15 mph. The water temp was about 68 and the channel cats were moving to spawn.

Anglers were allowed to fish from Steel Mill Dam at Milan to the Hwy 72 Bridge at Byron on the Rock River. Fishing hours were 6:30 am to 3:00 pm. All anglers were required to be in the weigh-in line by 4:00 pm at Page Park in Dixon.

When the weights were recorded it was Matthew and Seth Stephens of Oregon, Illinois and Jacob Diehl of Dixon, Illinois taking bragging rights and the first place prize. They weighed in 47.12 pounds and earned $3,500.00, plus an additional $1,020.00 for Big Kat.

The three-man team targeted fish in shallow water with the big fish coming out of one foot of water. They fished off the rope near brush, indicating that the warmer water had helped the bite. They used bluegill for bait to land 6 fish on the day.

“We had a very fun day,” reported Diehl. “We were fishing brush piles mostly the whole day. Live bait is all we were able to get bites on.”

Taking second place were Matt Dennison and Tyler Richards, both of Rock Falls, Illinois. They boated a weight 38.72 pounds and earned $1,800.00. The team anchored in the Rock Falls area using cut shad for bait in 3 – 10 feet of water. Dennison and Richards targeted current seams and ledges to land more 30 fish on Saturday.

Chris Baynes of Mankato, Minnesota and Logan Miller of St. Peter, Minnesota took third place with 34.70 pounds and earned $1,000.00. Baynes and Miller made a 6-hour road trip to fish in the Browntown area. They anchored in 4 – 8 feet of water using cut creek chubs to catch 14 fish for the day.

Fourth place was filled by Bob Clapper of Rock Falls, Illinois and Ricky Richards of Sterling, Illinois. They weighed in 34.14 pounds and earned $700.00. The team fished below the next dam, south of Dixon, targeting structure in 5 feet of water. They used cut shad for bait to catch about 20 fish.

Aaron Schrader of Sterling, Illinois and Mark Sanders of Dixon, Illinois took fifth place with a total weight of 32.28 pounds and earned $500.00. Schrader and Sanders fished 12 miles north of Dixon, targeting deep water structure in 20 feet of water. They also fished off the anchor and used cut shad for bait to land 6 fish for the day.

Tournament organizers sent out a special thank you to Becky Riley with tourism and the staff for promoting the tournament and helping make the event a huge success and to Rich and family with ACE for supporting the event and allowing the use of their facilities. The city of Dixon, IL was also thanked for welcoming the King Kat to town and being very hospitable to the anglers.