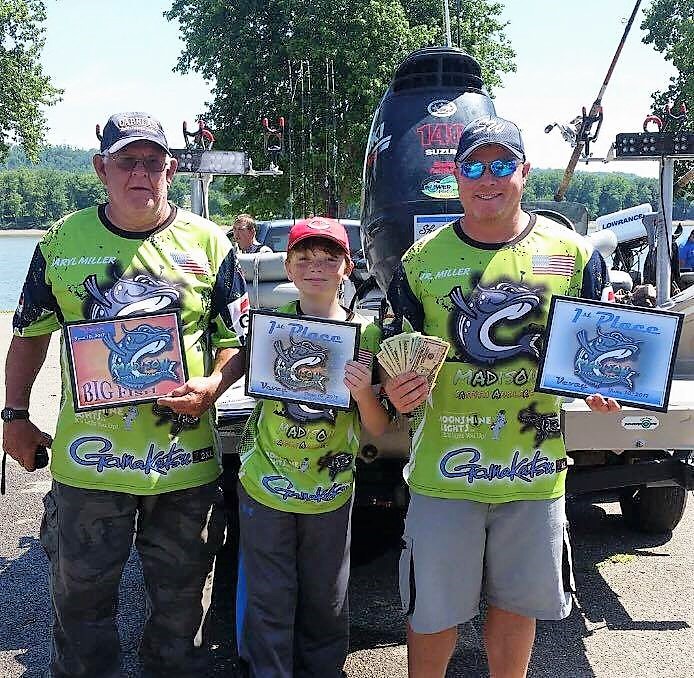 Ten teams competed for top honors at the family friendly Madison Catfish Anglers tournament on the Ohio River out of Vevay, IN. Each of the top three teams had kids on the team. The weather and water conditions were pretty good. The day progressed from warm and calm to hot with winds at 10 to 15 mph, which helped keep anglers more comfortable, but it was still hot.

At the end of the day it was Daryl Miller Jr., Daryl Miller Sr. and Braylin Miller that claimed the top spot. They weighed in 46 pounds, which included Big Fish at 22.4 pounds.

Team Miller started the day drifting in 20 to 30 feet of water, just below the Markland Dam. “We used skipjack and a few fresh mooneye,” reported Daryl Jr. “We managed to catch five fish in the first couple hours, including our biggest. As the day went on the wind picked up and we changed location to a nearby power plant which was more out of the wind. We caught four or five bigger fish that we were able to use in place of some smaller ones we had in the livewell. The fresh skips and mooneye were the ticket.”

“My son Braylin started fishing with us last year,” added Daryl Jr. “This was the first time we were able to pull off a 1st place/big fish combo with him in the boat. He loves to be on the water and I believe I have a lifelong partner.”

Second place went to Jack Hite and his daughter Shayli. Team Hite weighed in 38.6 pounds to claim their spot. The finish was particularly gratifying because it is the first time the father/daughter team fished together and finished in the money.

Ten-year-old Shayli Hite caught their first five fish, including the largest at just over 16 pounds. “All our fish were caught drifting with mooneye,” reported Hite. “As soon as we noticed loss of all current we decided to make a run to the dam. We caught at least 15 more fish while spot locked. All were between five and seven pounds. Shayli had a blast and was her first time placing in a tournament fishing with me.”

Another family team stepped up to win the 3rd place prize with 25.0 pounds. Team Reynolds is made up of Claude “Cat Man” Reynolds, his dad Mike, and his daughter Katie.

“We started out anchoring in a spot up by Markland dam,” reported Cat Man.  “I walked baits back with baits thrown out around us. Within about 30 minutes of no bites I knew I needed to go drift fish based on my fishing a couple of days before. So, I went to one of my go-to spots and started catching right off.”

Team Reynolds fished with frozen skipjack and fresh mooneye they had found the day before. “The mooneye was what they was wanting,” said Cat Man. “They were fresh.”

“A 1.5 mph current allowed me to back bounce,” added Cat Man. “We caught three bouncing, three drifting and one more came from dragging. We were fighting the wind for the rest of the day and ended up having to point the bow down river so I took my bumping rod and started to drag behind us.”

That move paid off, since Cat Man had one fish that was not doing well and he decided to put it back. “It was not looking good so I opted for putting it back, hopefully to get in the river and live,” said Cat Man. “I went back to four fish at that point. Not five minutes later I caught a flathead dragging. It was little bigger then the blue I put back. I felt like it was a payback for trying to do the right thing. There is no fish, big or small, worth any kind of money to take a chance of dying. Especially in the Ohio River.”

“This was the first tournament my dad fished with me and the 4th my daughter fished,” revealed Claude. “Katie helped me catch the Mooneye and got three of the cats in the boat. Dad got himself one, but he didn’t mind watch me and his granddaughter having fun together and like he said it’s a team.”

As usual we missed a couple good ones,” continued Claude. “My daughter ran her own rig and three times she thought she was hung, but as I looked the line was down river and rod bent. She couldn’t get reeled down on them fast enough, so the last hour she never let go of the rod in the holder. It was really funny. We told her she didn’t have to do that, but she said, “Nope, if I get another bite I won’t miss it.”

“This is one tournament I’ll never forget,” said Cat Man. “I got to fish with the man that tought me how to fish and I got to teach my daughter more.”

“We normally have between 15 and 25 teams,” offered tournament director Daryl Miller Jr. “As many as five or six of them will have kids. Doc and Lynn Lang, for example, like to fish our tournaments with their grandchildren when they get a chance. I would love to see the number of kids continue to grow!”