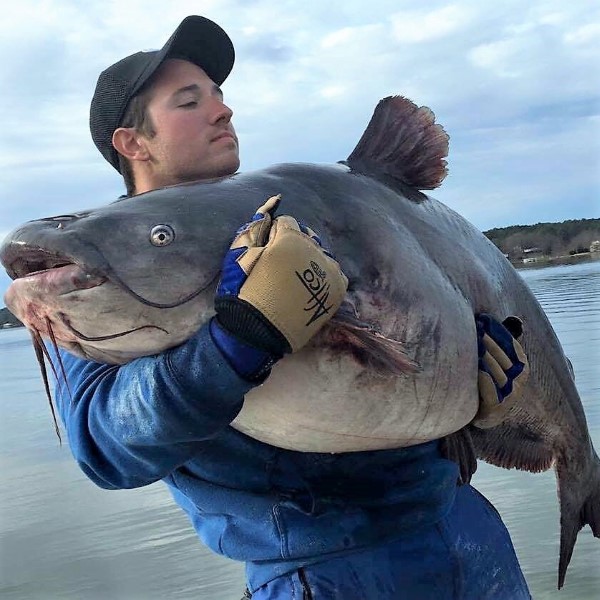 Making memories that last a lifetime

Zakk Royce developed his interest in catfishing on the banks of the Meherrin River in North Carolina, fishing with his dad. He credits his great grandad for passing the passion for fishing on to his dad, and his dad on to him.

“The only regret I have regarding fishing and the outdoors is not spending more time fishing with my great grandfather when he was alive,” offered Royce. “He was a hardcore fisherman and ultimately the reason that I ended up getting serious about fishing. He is the person that took my father at an early age and formed him into an avid outdoorsman. My father was the first person to take me fishing.”

“The Meherrin was loaded with channel catfish,” said Royce. “That is where I really got the fever for fishing. Years later when I was around 11 years old dad took me to Lake Gaston for the first time. We did not have a boat so we spent time on the bank, doing what we could, and we ended up landing some nice blue cats.”

About a year later a trip to Gaston solidified his passion for catfishing. “I got my first big one at 43 pounds,” recalled Royce. “I was 12-years old. That was the night that took things to the next level for me, as far as getting serious about fishing. I remember it like it was yesterday.”

Royce also credits fishing in his upbringing as an activity that influenced his path to adulthood. “I really feel that growing up, going through my teenage years for example, that fishing helped keep me on the right path,” offered Royce. “When other kids were going out getting into trouble, I was with my dad on the river bank or in the boat fishing.”

“Guiding is a lot of work,” declared Royce. “Contrary to what a lot of people think, it’s definitely not the same as just going out fishing on your own. But, I would not trade it for anything. For me, I find as much, or more enjoyment, watching others reel in a big fish. Especially kids, or someone who has never caught a big fish before. Knowing that I can play a part in helping people make memories that last a lifetime, it’s a very satisfying feeling.”

Royce enjoys the encounter with the fish and the opportunities offered by guiding for trophy cats. “I simply enjoy being on the water,” said Royce. “And the challenge of figuring out the ever-changing patterns of the fish. Guiding is the only job I know of that allows me to be on the water nearly every single day. It allows me to learn more and more about the fish. It actually fuels my passion for catfishing.”

That time on the water was instrumental in developing his own personal favorite style of fishing. “I enjoy all types of fishing, even if it’s just bluegill fishing,” joked Royce. “After all they make good catfish bait. I enjoy fishing in general and have respect for every species. However, my specialty, and what I enjoy the very most, is without a doubt, targeting trophy blue catfish. I absolutely love trolling and drifting with planer boards for blue cats. It’s so much more exciting to me personally than other styles of fishing.”

The growing popularity of trophy catfishing is slowly changing the mind set of catfish anglers. Royce has been in the forefront of educating the public on conservation issues related to the big cats.

“I am a huge believer in selective harvest and catch and release of the larger fish,” said Royce. “I am perfectly fine with people keeping a few fish under 15 pounds to eat, and believe it’s a good thing to take some smaller fish out. But, there is plenty of evidence to show that the larger fish are critical to keeping a population thriving, they are the big breeders. Additionally, every time you release a trophy catfish you are giving someone else the chance to experience that same thrill you enjoyed.”

When it comes to fishing with kids he offers some straight forward and simple advice. “Set a good example, and take the time to actually teach them, from an early age, the correct way to do things on the water. Safety should be the number one factor at all times.”

His reputation as a big fish guide is validated by his two North Carolina blue catfish records. Royce caught two state record blues in a 24-hour period. The first came on December 20, 2016 with a 91-pound blue. The very next day he topped his own record with a 105-pound Lake Gaston beast.

“Those are two days I will never forget,” stated Royce. “The first record was already a dream come true, because it’s something I had always really wanted, but didn’t actually expect.”

“To be honest, the second one just didn’t even feel real. I didn’t realize it was an even bigger fish than the day before. Then, after my dad got it in the landing net, the hook ended up coming out in the boat before I ever removed it. It was a very close call. Just unreal all the way around.”

Now his thoughts go to the future. “As far as topping my own record, I have to say I don’t think I ever will,” said Royce. “I think it would be awesome to land a third state record, but it still wouldn’t top the two that were only 18 hours apart. My goal right now is to put a client on a record fish!”

Catfishing is more than just putting fish in the boat for Royce. “Fishing has always been where I found peace, away from the everyday stress and obstacles that we face in life. I have been addicted to it since the first time I can remember ever going, and I never plan to stop. No matter what else has been going on in my life, fishing has been the one escape where I can get away and forget about everything else for the time being.”

For more information on Blues Brothers Guide Service you can phone 919- 724-2474 or visit the website at www.bluesbrotherscharters.com.