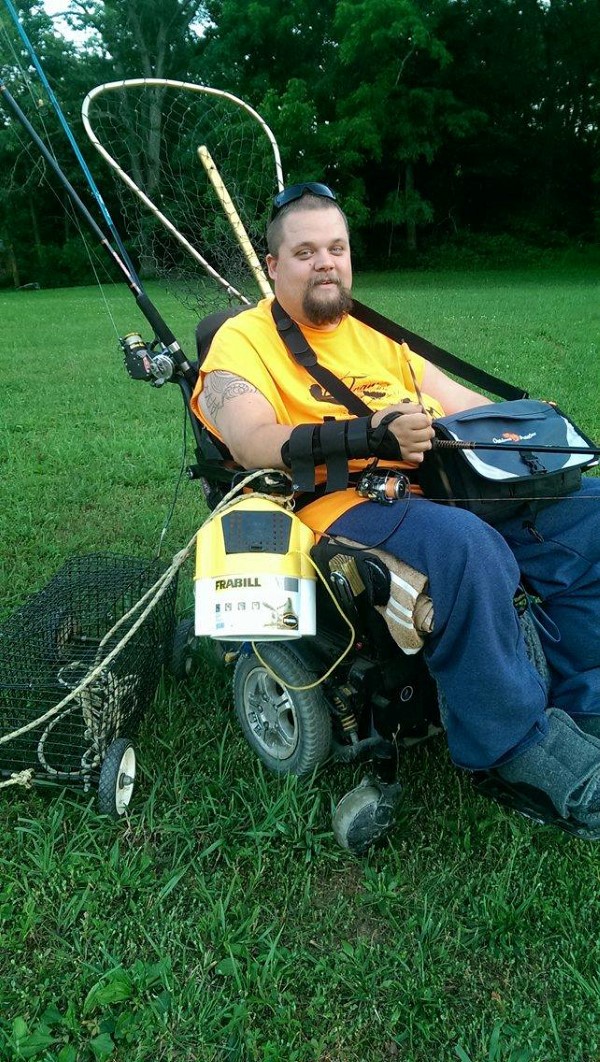 Talk about opening a can of worms. Lol. I could write a whole dissertation on the pros and cons of pay lakes. If you talk about farm raised channel cat lakes, I love them. There are, however, a lot of ethical concerns regarding trophy lakes, but at the same time, their operation is usually legal. I grew up fishing natural waters and pay lakes, so the issue of pay lakes is kind of a conundrum for me.

Editor’s Note: Those opening words are from Kentucky resident Chris Lanham. Chris is a quadriplegic. He was featured at FieldandStream.com in August of last year in a story on pay lakes. Nicknamed, “Catfish” Chris, his life is spent in a motorized wheelchair that prevents him from activities that other anglers might take for granted. The Field and Stream story revealed that Lanham was in a car wreck, when he was 18 years-old. That incident left him paralyzed from the chest down. He could not fish after the accident until his grandpa built him a special fishing rod and reel that he is able to strap to his right forearm. He operates an electric reel through a switch on his chair with his left hand. Chris is now 32 years old, with 15 years of experience, living and fishing from an electric power chair. CatfishNow contacted the Kentucky resident and ask him about his relationship to pay lakes. This is his response.

Pay Lakes seem to be a phenomenon within the Kentucky, Indiana, Ohio, West Virginia, and Tennessee areas. People should understand, that not all pay lakes are created equal. There are four different types of pay lakes within these areas. You have your farm raised, your wild caught, your trophy lakes, and your mixed lakes. Each one of these are little bit different in regard to how they get their fish and how they operate.

Fish are usually no more than two-years old whenever they are pulled from fish farm lakes and average about 2 to 3 pounds. You can always tell farm raised channel cat based on the coloration that they have which will be a darker bluish/grayish color because of the shallow nature of the farm ponds that they are raised in and the high level of water quality. Pay lakes will usually buy these fish at around a $1.60 to $1.80 per pound. Lake owners will usually charge around $12.00 to $20.00 for a 12-hour ticket to fish. Anglers can then catch a certain number of catfish, a certain poundage, or even unlimited fish in some cases.

The main difference is that you can get wild caught fish in this poundage range for about 90 cents per pound versus paying the cost of farm raised channel cats. You can usually tell the difference between a wild caught catfish, and a farm raised channel catfish, based on the coloration of the fish. Your wild caught fish will have wide variances in color because of the different depths at which they are caught and the quality of the water, which fluctuates between the bodies of water that they are caught in. Usually they will have a brownish to yellowish color to them.

The next lake is your mixed pay lakes. These seem to be some of the most popular lakes. Most of these lakes predominately stock farm raised channel catfish, but will once or twice a year stock anywhere from 200 to 1000 pounds of your larger 15 pound and up wild caught catfish. People usually come to fish these lakes to fish in the same manner that they fish the two types of pay lakes listed above. Sometimes these lakes will offer a prize for biggest fish of the week or offer a free pass for catching a tagged fish over 15 pounds. Most of the customers that are visiting these lakes are coming for farm raised channel catfish.

The last type of pay lakes in this area, and the most controversial, is your trophy cat pay lakes. These pay lakes are only stocked with catfish that are wild caught and are 15 pounds and above. Most of the trophy cat lakes will stock anywhere from 3,000 upwards to 15,000 pounds a year. Prices for trophy catfish can range anywhere from $3.00 a pound all the way up to $8.00 a pound.

Trophy lakes are the most talked about, but is by no means the most common pay lake. Most of the laws that have been passed recently to protect natural water fisheries from the over harvest of trophy size catfish are because of these lakes. Some of these lake owners have even started transporting fish from Maryland, where blue catfish and flathead catfish are considered an invasive species. This practice has not really caught on because of the price associated with hauling fish that far and the lack of a commercial fishery presence in the Maryland area.

Now, given that I’ve explained the different types of pay lakes that are out there, why would somebody want to fish these lakes? In my situation, being a disabled angler, I’m extremely limited in regard to bank access where I can safely maneuver my power chair down to the water’s edge. Before my accident, I spent many years fishing almost every single natural body of water within the state of Kentucky. Any spot that is easily accessible by me, is accessible to every other person out fishing and usually overfished. Any quality spots require an extended hike through unpassable terrain or a boat.

I do a majority of my fishing nowadays at farm raised channel cat lakes or your mixed lakes. I still enjoy going out to the natural bodies of water, but we all know that we go out for the pursuit of the catch not to sightsee.

Most of the farm raised channel cat lakes are pretty accessible for disabled angler’s around the banks. They also present anglers with better odds to actually catch fish. I have fished in several tournaments at trophy cat pay lakes over the years, but that is by no means where the majority of my fishing takes place. Personally, I do have some ethical concerns with respect to the over harvest of trophy size catfish from local waters, but at the same time, these lakes are still legally operating businesses.

If anglers are wanting to create change to protect fish from the natural waterways, they need to really focus on getting policy changed and funding allocated to do proper research studies to determine if populations of trophy cats within the natural waterways are being negatively affected by the trophy cat industry.

Often, you will see anglers attacking each other, especially on message boards. In my opinion this is not the proper way to go about creating the change that is needed to protect trophy catfish populations. Most of us have the same natural desire to pursue and capture catfish from ponds, lakes, and rivers. Attacking one another is definitely not going to garner the proper cohesion from both sides of the argument in regard to coming up with a compromise to satisfy both parties.

Honestly, I love fishing. I grew up fishing all around Kentucky and the coast of Georgia. Pay lakes are a very controversial issue with catfishermen right now. I have no issues with farm raised or mixed lakes. I have seen a lot of enjoyment brought to people’s faces from them. The other lakes, however,  are giving a black eye to the industry. Not all pay lakes are bad though.