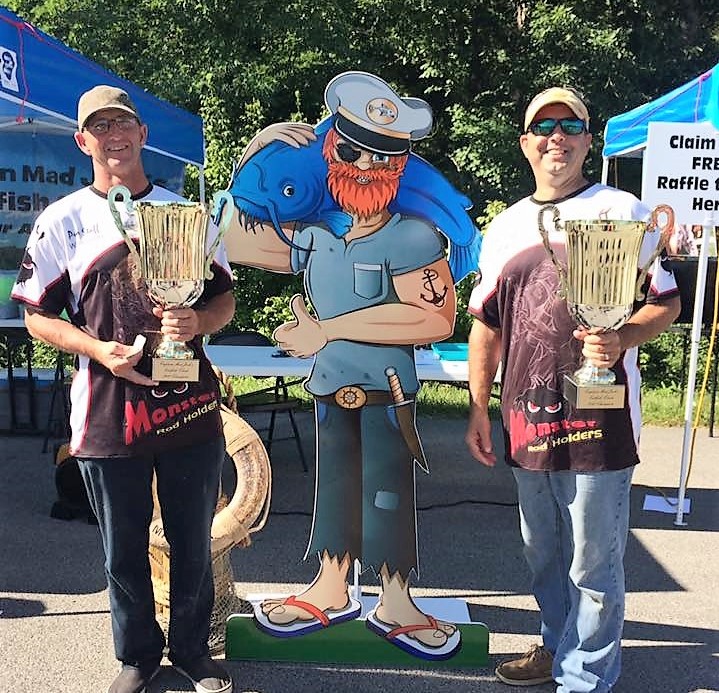 Steve Douglas conducted the highly anticipated and successful event on Taylorsville Lake this past weekend. The inaugural Capt. Mad Jack’s Catfish Clash was held on July 14th and 15th, 2017.

The event was staged with a mission statement that could be adopted by all catfish loving anglers everywhere. It reads, “Promoting the sport of catfishing while raising conservation awareness and good sportsmanship through education, community activities and sharing our passions for these magnificent whiskered fish.”

Events like Capt. Mad Jack’s Catfish Clash is just what the catfish community needs to help it continue to grow. As more recognition comes to the industry more anglers will join in, more communities will be supportive, and more manufacturers will get on the band wagon in support of catfishing activities.

“A strong weather front moved through minutes before the registration, reported event organizer Steve Douglas. “That didn’t stop the anglers from signing up to have a chance at winning some of the $8250.00 in prize money in the 100% payback event.”

“Fishing conditions were tough overall,” continued Douglas. “It could have been from the front, but this lake can be a challenge this time of year with fish coming off the spawn and lake thermocline conditions, plus the abundance standing timber and shad hatchling. But, challenges are what makes a better competitive fisherman. They make you think, learn and adapt to your conditions.”

The boat anglers launch at Possum Ridge Boat Ramp, which gave the them access to 3,050 surface acres of water and a shoreline that measures 78 miles. Following the National Anthem, the boat entries disappeared into the night with a plan to return to weigh-in with a boat full of fish.

When the weigh-in was complete it was Willie Smith and Nick Anderson claiming the win. Smith and Anderson brought in 5 fish that weighed 39.2 pounds. They began in shallow water dragging shad before switching to pulling floats. They used carp for bait on the float rigs. The team caught 40 fish for the night on the way to their first-place finish.

In second place was Parker and Jack McDonald. Team McDonald caught their fish on the rope in 20 feet of water, using skipjack for bait. They reported catching 2 fish for the night, but one of them ended up being Big Fish of the event. Their big blue added 21.2 pounds to their total weight of 33.6 pounds. They earned $1500.00 plus an additional $1650.00 for their big fish, giving them a total of $3150.00. This was Team McDonald’s first tournament, proving that anyone can compete in tournaments with success.

Third place went to William Conway and Donald Miles with a total weight of 26.4 pounds. The team anchored in shallow water and fished with shad to earn $1000.00 for the night.

Mathew Chesser and Randy Simms weighed in at 24.5 pounds to claim the fourth place spot. They too were anchored in shallow water using shad and bluegill for bait.

The fifth-place team of Chris Souders and Nick Conway caught a total weight of 19.9 pounds to earn $500.00. They reported catching their fish by dragging shad on the shallow flats.

Kenny Allen and Tommy McWilliams weighed in 16.7 pounds to round out the top 7 teams. Allen and McWilliams were also anchored in shallow water. They used shad for bait.

The shoreline anglers brought their lanterns and night fishing gear to line up on the bank for an opportunity to win prizes for 1st, 2nd, and 3rd place, plus a prize for the biggest fish caught. The contest ran from 9:15 pm time until 1:00 am. Anglers had to meet local and state fishing regulations and could weigh in a maximum of 3 fish.

At the end of the day it was Cody Satterley claiming the first-place prize with 1.6 pounds. Second place went to Todd Duke with 1.4 pounds and third place went to April Kaltofen with 1.1 pounds. All the anglers were given raffle tickets and more prizes were distributed to a happy group of catfish anglers.

Carl Morris Jr’s response to the tournament was double edged, because he participated as a sponsor and an angler. “I thought the tournament went very well, not only from a sponsor point of view, but also as an angler. It was relaxed Friday evening at registration and getting on the water was smooth. Most guys were able to get their livewell check, get their boat on the water, and tie off. That allowed them to spend time talking with other anglers and catching up.”

“Fishing was tough for most,” continued Morris. “It was a little different that fishing rivers. Taylorsville had a thermocline and it really changed the approach of a lot of fisherman who traditionally fish deeper for blues. They were concentrated in shallow water.”

“We Saw some nice blues coming up to the top of the water in the early morning of the tournament,” reported Morris. “But we couldn’t figure them out. We tried several different approaches to get them to bite but just couldn’t find the right one to make them open up.”

“Getting off the water and weigh in went well. We were proud of our 8.4 pounds, because we worked really hard for those little guys. We lost one other little fish at the boat or we may of broke 10 pounds,” joked Morris.

“As a fisherman, it was both fun and frustrating all at the same time,” concluded Morris. “We broke out tactics we haven’t used in a long time and tried some more we made up while there. We learned from the experience to be better for next year’s event.”

“There are some really nice fish in that lake, but unfortunately the bite was tough and I was unable to find the big fish. Steve (Douglas) and his crew of volunteers did an amazing job of running everything smoothly and officially, but one of the most enjoyable parts of the weekend for me was the meet and greet before the tournament started. I always enjoy meeting new people and getting to talk to people I haven’t seen for a while so I really enjoyed that. I will definitely be back next year!”

Congratulates all the winners and participants. Also, special kudos to Steve Douglas and all that helped him on this event. The inaugural Capt. Mad Jack’s Catfish Clash shined a positive light on the sport of catfishing.