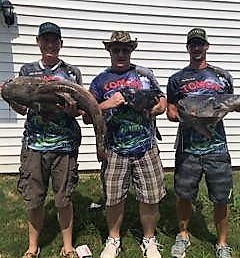 How did they fish?

There is no time like summer to hold a night catfishing event. The Bass Pro Shops Big Cat Quest travelled to Rome, GA and the Coosa River to host their Saturday July 22, through Sunday July 23rd Nite Series tournament.

Some very specific rules shadowed the anglers and influenced their strategy. They were required to launch the boat on the Coosa River or its tributaries in the state of GA. Weiss Lake in Alabama was legal waters, but NO fish caught or landed in Weiss Lake, 34 inches or greater, could be transported across the Alabama state line.

At the end of the day it was the three-person team of Aaron Churchwell, Jake Herman and Steve Lyon at the top of the Leader Board with 88.75 pounds. “It was coolest feeling in the world to finally win the tournament that got me addicted to the sport of catfishing,” declared Churchwell.”

Fishing at night adds a few extra challenges as well as benefits. The benefits include cooler temperatures and sometimes a better bite. Challenges include loss visibility in terms of what’s going on around you and for all-nighters, just staying awake.

Churchwell joked about keeping Steve Lyon (Herman’s dad) awake all night catching fish. It is not sure if they let him nap or not? Churchwell enjoyed the cooler nighttime temperatures. “The temps at night are bearable,” he commented. “Daytime fishing hasn’t been producing much, so I’m glad it was a night tournament. Eighteen hours on the other hand, is a different story. It’s hard on everyone that competes.”

Churchwell described the bite as slow but steady, especially for a post spawn bite. “We caught 12 fish in the 18 hours,” reported Churchwell. “We didn’t really get on them until about 2:00 am. It was then that we finally figured out what they wanted to eat. We stayed anchored up and gave a spot a lot longer than usual. Every one of our fish ate cut bream. We couldn’t beg a bite on shad or live bream.”

Most of the team’s fish came from about 2:00 am until about 8:00 am. “I don’t necessarily target blues in the Coosa this time of year,” said Churchwell. “But the flats wouldn’t cooperate. Jake Herman caught the big fish, which was a 38-pound flathead. It was the only flat we weighed in.”

That big flattie turned out to be Herman’s personal best, but the tournament had even more meaning to Herman. “Aaron and I started out fishing against each other on the Coosa River in Rome, GA,” explained Herman. “I kept coming in just behind him. We decided to try fishing some new water and paired up to go fish Winter Blues on Wheeler. From then on, we have fished together. It’s hard to find someone you can spend that much time in the boat with, without arguing or getting upset.”

“Last year we placed 4th in the BCQ Rome event and set a goal to not do worse this year,” continued Herman. “We decided to bring my dad this year. We went out gave it our all and could not get fish with our normal tactics. We started the daytime fishing in deeper water with live and cut shad and live bluegill/bream. We could not get a bite. As it got dark we moved spots, fished with the same baits, and got the same results.”

“Next, we started cutting the bream we had fished live and started catching some fish,” explained Herman. “So, we switched to only cut bream and shad and the bream would get hit almost every time, so we abandoned the shad and caught fish all through the night. We caught fresh bream the following morning, but did not have much luck as the sun was getting higher.”

Herman recognized the very tough competition. “The fountain team bumped us down from 3rd to 4th last year. And, like last year they were one of the last boats to weigh in. It was an accomplishment to keep our lead when they weighed in. They have the knowledge and experience to catch fish anywhere, any time, and in almost any condition.”

“This event was special, not because we won, but because this is where we met,” offered Hrman. “It is hard to find someone who is not only a team player 100%, knows what’s next in the boat and does it, compromises, and does not argue or get upset.”

Herman and Churchwell have an acronym for their fishing style. “I credit our success to both Aaron’s and my ability to OODA,” concluded Herman. “It stands for Observe, Orient, Decide, and Act.”

Churchwell thanked Tommy Roberts with Tomcat Rods, Jessie Simmons with Elite Rod Holders, and Matthew Miles with Katfish Clothing for their support. He also congratulated everyone else that fished and placed in the tournament.

Second place went to the team of Lonnie Fountain, Dawn Fountain and Eddie Walker with a five-fish bag of 86.10 pounds. “It was hot said,” Dawn Fountain. “It was just hot! We put in around 6:00 pm and headed down river to an area where Lonnie and his father fished some 40 years ago. Lonnie has been lake fishing this tournament until a few years ago when he decided to return to some old ways of fishing.”

“We would stop at one hole and fish it for about an hour,” said Dawn. “Then we would pull anchor and go on down to the next hole. We did this all night long. When daylight came we turned around and went back up the river doing the same thing. We fished in 7 to 10 feet of water. With those shallow water levels, it’s almost impossible to catch a catfish once it gets past 9:00 am.”

The team lost a good fish in the process and reminded angers of an important lesson. “Lonnie had hung a good-sized catfish,” reported Dawn. “As he’s reeling it to the boat he stopped to see where I was with the dipnet. When he stopped reeling the fished flipped around and got loose. I was standing right beside him with the dipnet. LOL.”

“It appeared those fish we caught this weekend were just finishing up their spawn or on bed, because they were all scratched and skinned up pretty bad,” Dawn reported. “July is a tough month to catch those Coosa River cats.”

Finishing out the leader board were:

The BIG FISH honors went to Ronnie Croucher for his 40.70-pound blue cat.

The next BCQ event is scheduled for September 2, 2017 at Tunica MS.