Why We Catfish: A Guest Editorial by Teresa Owenby 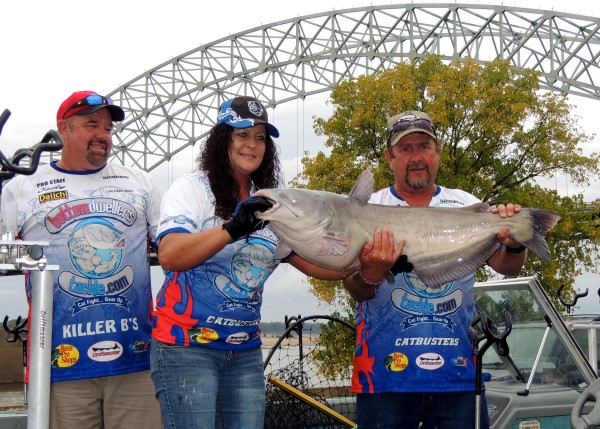 Editor’s note: Teresa and Tim Owenby have a passion for catfishing that grew over time and included a conversion for Tim. Now, for the last 12 years, they are catfish tournament partners, fishing tournaments under the name of Catbusters.

Tim Owenby was a bass fishermen and he was pretty good at it. He fished a few local tournaments. He tried to get me to go, but I didn’t really care for it. We lived on a farm that had a pond stocked with bass and brim. Tim and the boys fished on a regular basis and sometimes I would watch them.

On Mother’s Day, about 13 years ago, Tim bought me an open face rod and reel. That actually didn’t go over very well, because I thought Tim had bought that for himself, because I only knew how to cast a push button reel.

Not long after that Tim had something go wrong with his boat and carried it to a repair shop. While at the shop he saw an advertisement for the Hilljack Catfish Tournament. He came home and asked if I would like to fish it with him. To his surprise I said yes.

So off to Wal-Mart we went to get the latest catfishing gear (so we thought). You know like the Zebco 808, the biggest J-hook we could find, and of course 3/4-ounce weights. For bait, we relied on advice from a friend of Tim’s who told him to use mullet gut. The friend said it was the best.

When we got to our first tournament we didn’t see anyone else with tubs of mullet gut. We just figured they had worms and livers. We were sure we had the winning ticket. LOL.

I don’t know how, but we pulled off a third-place finish and the Catbusters tournament team was born! We realized it was a lot of fun spending time together fishing and we met an awesome group of people. Today we are still good friends with the same people that we met on that first tournament day.

Along the way we have made new friends across the U.S because of this sport. The catfishing world is a group of people like no other. They go out of their way to help one another and to educate and support each other in good times and bad. You’ll get slapped on the back and congratulated on the good times and the community will often come together with a benefit tournament in times of need.

The sport of catfishing still has a long way to go, and so do we. I look back and see how far we have grown from not knowing what bait to use and trying to catch that Volkswagen catfish at the Dam. Now we are drifting, dragging and bouncing. We learn something new all the time. Our idea is that even if we don’t place, but we learn something, we still come out a winner.

Our venture into catfishing has been an amazing trip. We went from Tim buying me a fishing pole that I didn’t know how to use, other than to whip him with (LOL), to being sponsored by Bottom Dwellers Tackle and Driftmaster Rod Holders.

It is exciting to plan our next trip, stock up on supplies and catch bait (which I do enjoy doing). More than catching bait, my favorite thing is reeling in a monster cat. It’s a feeling like no other. We have been married for 32 years and we are closer now than we have ever been, thanks to catfishing.

We hope to fish as many future tournaments as possible, but fishing for fun will always be a part of our passion. We look forward to growing with the sport. Catfishing is a part of us and we are a part of catfishing.