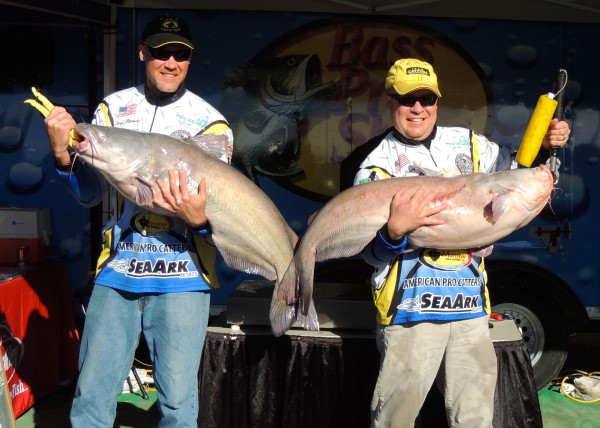 The definition of team work

Consistency is the word most often used to describe Masingale Catfishing. “Brothers Jason and Daryl Masingale will catch fish 99 percent of the time in any water,” said one fellow angler.

“What can I say,” asked a tournament competitor. “They are tough and know how to fish. They always do what needs to be done to catch fish.”

The two anglers, from Paragould, Arkansas, got their fishing start early in life. They both credit their dad for instilling the love of fishing in them. Their passion started in small ponds and ended up in the Mississippi River and beyond.

“From as early as I can remember our dad would take us fishing at small ponds near our house and at my grandparents,” recalls Jason. “We fished for every species of fish that was big enough to get on a hook.”

“We fished those farm ponds for bass, bluegill, and catfish,” added Daryl. “Dad taught us how.”

The brothers have been addicted to fishing since they were four or five years old. “Instead of begging for toys on a trip to Walmart we were in the fishing isle looking at fishing baits,” said Jason. “We would try to convince mom or dad why we had to have whatever fishing lure we were wanting.”

As the brothers got older they started fishing the ponds on their own. When they were old enough to drive they expanded their adventures to other ponds, lakes and rivers.

“A couple of our friends would borrow their dad’s jon boats and we would fish out of them. We thought we were big time when we were able to do that,” joked Jason.

In their high school and early college years they started to target catfish and consequently discovered tournament fishing. It was a fellow catfishing enthusiast that took them fishing on the Mississippi and peaked their interest in tournament fishing.

“We first fished the Mississippi River in 14-foot jon boats,” said Jason. “We immediately decided we needed a bigger boat. During that time, I discovered an individual on a catfish forum that I had recently guided on a duck hunt. Matt Bingham was gracious enough to take me and Daryl fishing on the Mississippi River. He showed us what trophy catfishing was all about.”

At Bingham’s suggestion, the brothers decided to give tournament fishing a try. “Daryl and I ordered a 20-foot SeaArk and put an old outboard motor on it that we pulled off a bass boat. The first time we fished out of it was at a Cabela’s tournament in New Madrid, Missouri,” recalled Jason.

Team Masingale went to that tournament with a cooler full of Arkansas crackjack (aka skipjack) and some of the biggest crawdads they could find.

“Our livewell consisted of Rubbermate Totes with ratchet straps in the middle to keep them from blowing out,” remembered Jason. “A manually powered 5-gallon bucket was our pumping system for fresh water.”

“…the reward of a successful fishing trip is very satisfying.”

To say that tournament was a start of something great would be an understatement. Team Masingale finished in the money in that first tournament and have compiled a long list of top tournament finishes since. A quick calculation shows that they have had a run of tournament placements that averages no less than a third-place finish.

Whether it’s tournament fishing or recreational, the fun is in the fishing for the Masingale brothers. Bent poles are something that makes them happy, and it doesn’t necessarily have to be their poles.

“Most people laugh when I tell them this, but I love to catch skipjack,” offered Jason. “For me, skipjack fishing is just as challenging at times as trophy catfishing. But catching trophy catfish is definitely most enjoyable. When drag is peeling off the reel and Daryl asks how big is it, and you have no idea─that is definitely a good feeling.”

I’ve been fishing for as long as I can remember,” added Daryl. “So that’s about 41years. Drifting for trophy catfish on the major rivers and lakes in the south and Southeast U.S. is what I enjoy most. We primarily fish the Mississippi River, but enjoy fishing any new waters that have trophy class catfish. In reality, I enjoy seeing others catch fish more than catching them myself.”

Like most tournament catfishers, the Masingale brothers hold catfish conservation high on their list of priorities. They recognize that catfishing is not like it used to be and more anglers need to play a role in conserving what we have.

“I would love to be able to go back 300 years and see the rivers like they were before human influence,” suggested Daryl. “We will never see it like that, and won’t be able to undo what has been done, but what we can do is take care of what we currently have. Anglers should promote taking care of our natural resources, and keep them clean. I ask everyone not to litter, leave it like you found it or better.”

Practice CPR,” advised Daryl. “If you want to catch fish to take home for dinner, take the smaller fish. Return the trophy size fish for breeding stock. The genetics needed to grow trophy fish can only be passed on if they are allowed to spawn. I hope that fishermen in the future are able to have the same opportunity we have today. Better yet, if we all do our part, the future anglers will have a better opportunity to catch trophy fish.”

“I feel it is everyone’s responsibility to protect the resources and environment to the best of their ability,” added Jason. “Natural resources, such as fish and game, are totally dependent on the rules and regulations that are applied to them. It is up to us, as sportsmen and sportswomen, to protect, maintain, and improve these resources. Whether it be through trophy length limits or restriction of overall limits, it is very important that appropriate measures ensure that future generations will continue to enjoy these resources.”

Jason says it’s not too late. “We still have the opportunity to protect the waters that produce trophy fish. We can improve those waters that have suffered from over harvest.”

Understanding that the future of fishing depends on the kids, the Masingale brothers suggest keeping fishing with kids simple and fun. “There has been many a fishing trip that turned into a rock skipping contest,” stated Jason. “My point is, we should introduce them to the sport of fishing and keep it fun and entertaining.”

“Kids are our future fishermen,” confirmed Daryl. “We need to introduce as many kids to fishing as possible. Keep it simple and keep it fun. Fishing for bluegill under a bobber is a guaranteed fun activity for any kid.”

“When I first started tournament fishing I recall how I enjoyed being able to go talk to the sponsored tournament fishermen,” said Daryl. “I would like to be remembered as the guy that anyone could talk to. I love sharing what I know and helping other anglers catch fish.”

“I hope I am remembered as someone who enjoys life and the outdoors,” offered Jason. “As Masingale Catfishing I hope that we are remembered as a team that progressed through the sport of trophy catfishing while earning respect and maintaining integrity along the way.”

“Fishing for me has always been a way to escape the stresses of everyday life and work,” offered Daryl. “It’s a way to enjoy the beauty of nature and enjoy the simple pleasure of feeling the tug of a fish on the end of my line.”

“I like the challenge that fishing provides,” continued Daryl. “It is the challenge to catch a fish bigger than you have ever caught. You never know if the next bite will be the one you are looking for. Everything can change in a split second. The anticipation of that possibility is why I love fishing.”

“For me, fishing is an activity that can be very frustrating, but rewarding at the same time,” explained Jason. “You get out of it what you put into it. I guess what I am trying to say, is that the reward of a successful fishing trip is very satisfying. It provides an escape from day to day worries.”

“Whether it’s watching a bobber go down, catching skipjack, or drifting in 80 feet of water on the Mississippi River, the excitement is the same. It is an escape from the stresses of work and life. I can fish all day and realize at the end of the day that I was so focused that all I thought about was what can we do to catch more fish.”

Daryl at 46 and Jason at 44 are proof positive that hard work, determination, and teamwork pay off. They have plenty more tournaments to fish, and an abundant amount of catfishing tips and techniques to share.

Just about the time this story is published, Masingale Catfishing will be presenting a seminar at the 2017 Mississippi River Monsters catfish tournament in Memphis. One day later they will compete in that event as defending champions.

1. You caught a state record sturgeon, but didn’t realize it until a few months later.
2. You enjoy catching bait as much as catching catfish.
3. You once fought a stick on a rod and reel for 3 minutes thinking it was a fish.
4. You would rather watch someone else in the boat catch the big fish.
5. You love to see the smile on peoples face when fighting big fish.
6. You have tournament catfished for more than a decade.
7. You fished on a team that averaged a 3rd place finish over several years.
8. You love fishing the Mississippi River.
9. You believe in CPR and selective harvest.
10. You have no plans to stop catfishing anytime soon.