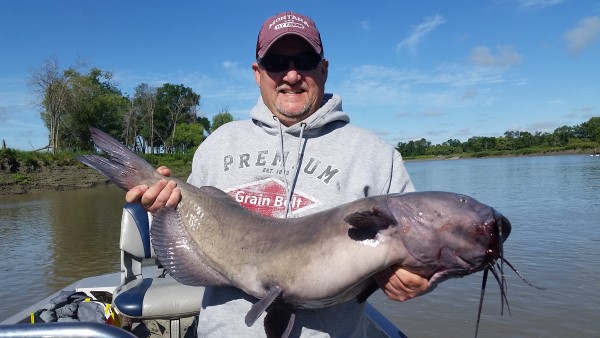 Making bad days not as bad

Catfishing is a sport where anglers of all levels try to accomplish the same objective. They are out to catch fish, and usually the biggest fish they can. Over the past few years research has been conducted on how weather and water conditions affect catfish. The findings help anglers to better understand patterns and how to adjust to them through a system of prediction.

We all know that conditions change, but do you know that in many cases these changes can be predicted? Some small adjustments to techniques can increase your catch, making a bad day not as bad.

When weather systems strike, or there is a seasonal change, there seems to be a four-day process that the catfish go through before the bite gets good or bad. This process is also in play during certain times of the season. There is a Rule of 4 that dictates the upswings or downswings of catfishing. Understanding how fish react to fronts and dramatic events in their water can increase your catch, even in the toughest of times.

Changes in the Weather

Basically, Rule of 4, is how long it takes catfish to adjust in or out of a pattern. In plain terms four days in and four days out of a pattern. Here is an example. Like many catfish anglers I have my favorite spots that I live and die by. There were fronts that would come through shutting off my bite. I noticed that the bite on day one was pretty horrible; day two a little better, but not many takers; day three was characterized by lots of picking and pecking at the baits before a fish was caught; and day four was back to normal.

I have since learned to adjust to the pattern through a series of different moves in the general fishing area. I have dubbed this “lateral movement”. This movement is not dramatic, but it still provides a learning process to be more successful after a big front.

“Understanding how fish react to fronts and dramatic events in their water can increase your catch, even in the toughest of times.”

Usually catfish (or any fish for that matter) get active as the barometer is falling, indicating a big storm or other weather event. During this time, the catfish will be running faster water breaks and be very aggressive as they prepare for the negative event. As the front passes and the wind changes to the northwest, indicating that the low pressure system has passed, the catfish will move to the area of least resistance, out of the current or into structure.

On day one they will start moving out of the structure or move to the secondary current seam. They are right next to the main current of the channel but not in the current.

On day two they will move to the edge of the secondary current or into the middle part of a hole in the main channel. They may play with the bait some before committing, but they will hit.

On day three a normal head of the hole, edge of the break line, bites ensues, but not with the force we all love from a catfish. Many times, the middle part of the hole may hold more fish.

On day four there is no messing with the baits, just slamming them. Fishing returns to a normal bite in the faster water and at the head of the hole.

It should be noted that not all fronts are created equally and this is an example of the most severe. Some will only slow a bite for a few hours, but most in some way shape or form will follow the Rule of 4, especially during times of higher stress such as spawn or low water conditions.

One of the more fascinating aspects of the Rule of 4 has to do with major shifts in water temperature. Research has shown, that with a big heat up or cool down, without a major front, the bite can hold for up to four days before making the pattern shift with the temperature.

If the water temperature is warm and stable with a very predictable catfish bite going on and there is a small front that sets off a cool down of three to six degrees, that bite pattern often won’t change to a sluggish off current bite for four days. Likewise, once the trend reverses and things start to heat up it seems to take four days to get back out to the fast water on an aggressive bite.

Two times a year there are exceptions to this. Prespawn and fall are times when the Rule of 4 is spot on to pattern changes, but the fish are so involved in eating to prepare for spawn and winter they don’t react as described.

During these two times of year it is fairly common to see dramatic drops in water temperature. Unless it is an eight to ten degree drop in a day or two, the catfish’s need to feed will keep the fast and furious pattern rolling. Sometimes they might move to the secondary current seam, but they will never be far from the main channel and the food trough.

Over the years I come into September and October trying to finish up the season strong. What I have found is that a couple of days of a major cold front that drops the water temperature from the mid-60s to the 50s is not going to affect the bite all that much until day four. Once we reach the fourth day then the lateral movement to the off current areas comes into play and adjustments to pattern must be made.

The easiest way to find the fish, knowing that they are close, is to use your Humminbird Side Imaging unit, like the Helix 10. Motor along the likely areas until you find catfish tucked in and sulking out of the current. Most of the time, if you put bait in front of them, they will take it without hesitation.

I pointed out some situations when a front can drop the water temperatures 10 or more degrees in just a few days. It is usually day four of the drop when the changes make their way from the surface through the entire water column. One thing that most catfish anglers are not aware of is, that fast warm ups can create the same shut down at day four just like clockwork.

The spring of 2017 has proven this theory of fast heating, not once but twice. In mid-May, we on the Red River of the North experienced a fast cool down from 63 to 55 degrees in five days. As expected, at day four the bite turned off until it leveled out for four days before turning back on. Just as everything stabilized it heated up very quickly and the temperature went from 55 to 73 degrees in just over a week. This caused an even harsher shut down to the bite.  It also triggered the fish into spawn to make things more difficult.

Once things settled down from the warmup we had very seasonal temps until another week long hot blast took the water temps from 68 to 80 in a matter of five days, once again shutting off the bite. The sad truth to the fast heating water is that the fish become even more negative than when it drops, but every time they shut off at the fourth day and turn back on after four days of stable temps.

When this happens, all we can do is keep grinding away by fishing normal patterns. We can go deeper or fish at night, when it is cooler, hoping they come out to feed.

Brad Durick is a nationally recognized catfish guide on the Red River of the North, seminar speaker, and author. He has written extensively about catfish and how they react to weather and water conditions. He has also gone deep into patterning channel catfish based on weather and water conditions in his books Cracking the Channel Catfish Code (2013) and Advanced Catfishing Made Easy (2016). Both books are available on Amazon and Amazon Kindle. For more information go to www.redrivercatfish.com.