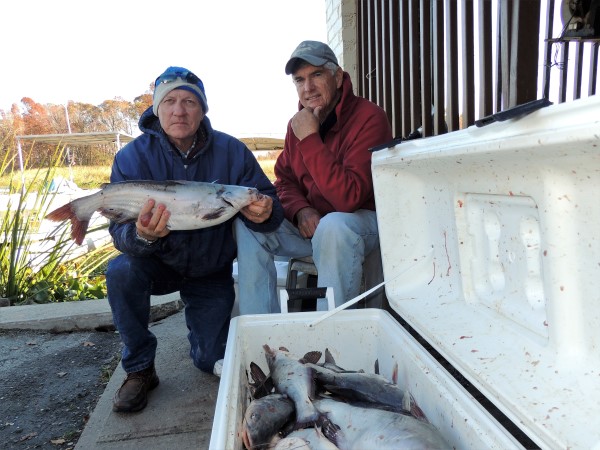 The Santee Cooper lake system is made up of two lakes. There is an upper lake, Lake Marion, which is the largest lake in SC. There is a lower lake, Lake Moultrie, which connects to Lake Marion through a seven and a half-mile diversion canal. As it is chronicled in history, the Santee Cooper lake system was under construction as WWII became a dominant event in US history.

“When the war broke out they had not clear cut the upper lake,” recalled catfish guide Doug Allen. “They needed to produce electricity so they just went ahead and flooded the farm lands and whatever else was there. The lower lake was basically clear cut, except for some areas that still had stumps in it. The result is an excellent fishery.”

Allen operates Santee Cooper Fishing (843-499-2574). His specialty is dragging his version of the Santee Cooper Rig. He is renowned for his go-to bait, a strawberry chicken concoction. Everyone knows that strawberry Jell-O is the ingredient that gives his bait the red color, but one question remains a mystery. Are there other ingredients that Santee Cooper catfish just can’t resist? The bottom line is simple. It works. It is not unusual for Allen to fill a client’s ice chests with eater size cats and a few more for catch and release.

The lakes are also famous for their abundant stock of landlocked striped bass. As the story goes, South Carolina traded some of Santee Cooper’s striped bass to Arkansas for some blue catfish. It was a trade made in heaven. Arkansas now has some great striper fishing and Santee Cooper has a reputation as a big catfish lake. The locals refer to the blue cats in the lake as Arkansas blues.

Catfishing from pontoon boats is very common on Santee Cooper. Allen prefers it. “I like the roominess of a pontoon deck,” said Allen. “It gives anglers plenty of room to move around and be comfortable. And, when the weather is cold we can button up the enclosure and be perfectly cozy.”

Allen’s years of guiding have led him to a tried and true method for catching catfish. He is a stickler for the precision in his setup and method. He starts with a fixed family of rod holders across the back of the boat. He numbers them from left to right. Equally spaced and mounted across the back are rod numbers 1, 2, 3, 4, 5, and 6.

About 18 inches up from the back, on the side rail, Allen has another rod holder on each side. He has them mounted at a 90-degree angle to the boat. On the starboard side, the rod holder is numbered ought (0), and on the port side he calls it double-ought (00).

Once his anglers understand the number system, Allen instructs them on the outfits and where to place the bait. His reels are number counter reels, and just to show the importance that he gives to bait placement, he gives each angler a little lesson to begin each trip.

“Sometimes you have to pull a little line through the reel just to be sure the number counter works,” instructs Allen. “Then make a comfortable cast directly behind the boat and start pulling out line until you get it back there where you want it.”

“Don’t throw out at an angle, because the line can come back and tangle the rest,” warned Allen. “Then it takes 30 minutes to get going again.”

“When you get the number counter where you want it, just lock it down. Bottom line, you want to have the bait straight out behind the rod holder.”

The middle two lines are put out first at 250 feet. “The reason we get them out 250 feet is because we do not want the fish to see the boat,” said Allen.

If Allen determines he wants to put out a couple more rods he will place them in the ought and double-ought holders out each side. Those lines are run back 175 feet. If he wants more of a spread he will run planner boards out of those side rod holders.

Allen’s terminal rig is commonly known as the Santee Cooper drift rig. There are different variations as anglers like Allen include their special “tricks” on the popular drifting rig.

Allen’s Santee Cooper weight is a flexible creation that he makes himself. He starts with about 10 inches of small diameter nylon rope. “I pull out the cotton insert and seal one end by melting with and open flame,” instructed Allen. “I fill the rope with about 14 #2 or #4 lead buckshot and finish with a 3\8-ounce lead swivel weight. Cut off the excess rope and seal that end with heat. I also carefully singe the sides of the rope to keep the buckshot from coming thru the side. This is my fishing weight.”

Next, he ties his terminal tackle. “I take a 10-inch piece of 80-pound mono and tie a small gold swivel in the middle to attach the weight to,” said Allen. “I add a regular swivel to both ends. I use this separate line to keep the weight from tangling with the main line or the leader line.”

About three-feet of 60-pound leader line is needed to finish the rig. “I add a cork on the line with a bead on top of the cork to protect it,” instructed Allen.  “Push the stick into the bottom of the cork to cinch it up and keep it from collecting debris.”

Allen then carefully snells a #6 or #7 circle hook to the bottom of the leader line.  If tied properly this knot will not slip and become loose. More importantly, it will turn as pressure is applied and catch the fish in the corner of the mouth.

“You can test the hookset by pulling the line thru your fingers,” advises Allen. “You will see the hook turn at the last second, to make a proper hookset.”

Tie the leader assembly and the 80-pound mono piece together and you have Allen’s version of a Santee Cooper rig. It is by far the most popular rig to use on either Marion or Moultrie.

The bait that Allen uses most often sounds like it may have come from somebody’s cookbook. “We will be using strawberry chicken,” offered Allen. “I soak chicken breast overnight in the fridge, in a mixture that includes strawberry Jell-O. I place one breast in a Ziploc bag and transfer it to the ice chest in my boat. From there I can take it out as needed.”

Small baits are the rule on Allen’s boat. “The bait we use is not much bigger than a 50-cent piece,” reported Allen. “Believe me, that small piece of chicken will attract the biggest cat out there. The reason the catfish like it is that it looks like the internal part of their favorite clams, which often pop open on their own to reveal the meat.”

Allen is referring to the large populations of corbicula that exist in the Santee Cooper lakes. The catfish love the clams and reports from the cleaning tables support the claim. Many a catfish has been cleaned that had their stomachs full of corbicula. The meat inside the corbicula is a delicate pink, similar in color to Allen’s strawberry chicken.

“…meat inside the corbicula is a delicate pink color…”

Once he is set up, Allen drifts over pre-determined ledges where he has caught fish before. A typical drift might start in 25 feet of water and drop down to 35 or 40 before rising again. The fish often bite either on the drop or as you climb back up a hill on the other side.

The lakes of Santee Cooper are pretty wide open and wind can often play a big role in your fishing day. Allen uses two or three drift socks to slow his drift. This is another reason Allen likes the baits to be trolled far away from the boat. “The drift socks are rather large,” said Allen. “I don’t want them to be visible to the fish.”

He justifies his insistence on fishing far behind the boat with a story from the past. “I had a first mate for about 12 years that would always put a rod out in front of the cabin,” offered Allen. “It was 100 to 125 feet back. I bet he didn’t catch 10 fish in 12 years. To me, that proves, the further out you get the more inclined they are to bite.”

“I have also noticed over the years, that some of the longest lines out always get hit first,” added Allen. “It did not matter whether it was a big one or a little one, they always got hit first.”

Allen further explains his “distance theory” with the use of sonar. “It takes 2 ½ minutes from the time you see them on the depth finder until the time the bait gets to em’,” advised Allen. “So, the further out you let the line, the longer it takes to get the bait to the fish. Those fish have already forgot you went by and they move back to where they were and you drag the bait right by them.”

By the end of the day it was apparent that Allen’s method worked. More than seventy fish were caught and landed on his strawberry chicken concoction, using a Santee Cooper rig, and fished using his strict rules about presentation.

So, the proof was in the pudding, or should I say the Jell-O?