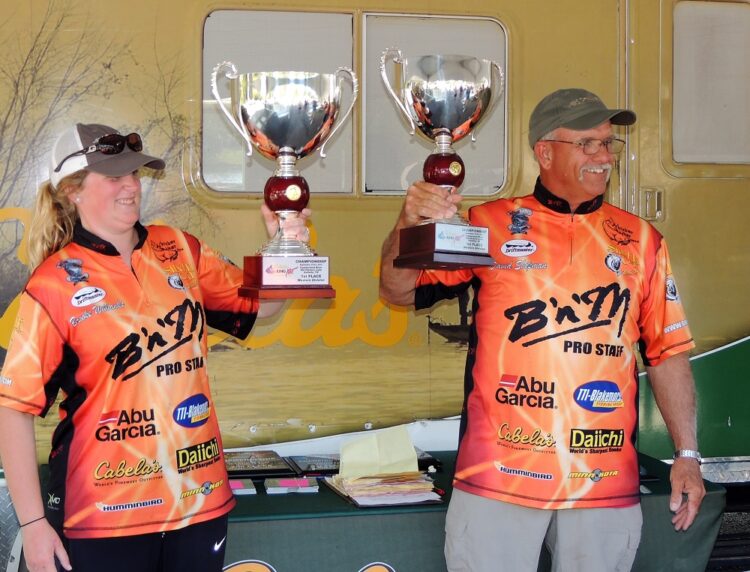 The Cumberland River (Old Hickory Lake) produced some nice fish for the 2017 Cabela’s King Kat Western Championship. The Sept. 22 and 23 event featured top anglers from all across catfish country.

Weather was in the low 90’s both days making it a hot championship. Light winds did not help ease the heat, and a light current made for a light bite, especially on day two. More current on day one helped produce some good fish.

Thirty-eight boats and 80 anglers, from 10 states, competed for prizes and bragging rights. The total purse added up to $39,000.00 in cash and prizes. The winners took home a fully rigged Alumacraft MV 1860 boat package.

King Kat tournament director Jeremy Coe described the potential of the Gallatin area as growing. Total numbers of fish and big fish weights have been increasing each year of the tournament.

The first day of the 2017 event saw some good fish come to the scales. Kenneth McKenzie and David Hill weighed in 104.70 pounds to take the early lead. Big Kat for day one was a 47.20-pound blue caught by Bruce Paulk and Brian Vohol. Neither of those teams would be able to hold on to their lead after day two.

The win went to David Shipman and Brooke Wilbanks, both from Corinth, MS, with a total weight of 142.06 pounds. Their first-place win earned them the Alumacraft Boat Package, $3,000.00 in cash and the Driftmaster Bonus.

“We were fishing in the river channel and over structure in 45 to 55 feet of water,” said Wilbanks. “The lack of current made for a slow bite. The current was basically dead. We used skipjack for bait and caught 8 or nine on the final day. We both drifted and anchored to catch our fish. When drifting we used our Ultera trolling motor to hold our direction.”

“We use B’n’M rods when we suspend drift,” added Shipman. “They have been great rods for us. We will use two 10-foot Silver Cat Magnum and two 7.5 footers when we suspend. They have a great tip to see the bite and a good backbone to land the big fish. They have held up great for us. We have used them for about a year now.”

Second place went to David Hill of Louisville, Tennessee and Kenneth McKenzie of Rockford, Tennessee. Hill and McKenzie had led on day one after breaking the 100-pound mark with 104.70 pounds. They finished the tournament with 141.36 pounds to earn $3,000.00.

Hill and McKenzie also fished down river around the Old Hickory Dam in the river channel in 45 – 50 feet of water. They caught about 12 fish for the weekend.

“It was a tough bite for us today,” reported McKenzie. “We caught one good fish right before the water started moving. We were hoping that as soon as they got the current moving we would get the next one, but we never did. We just set there on the hole and did not get the one we needed to get.”

“We fished anchored down, the same way we did yesterday,” continued McKenzie. “We used skipjack and fished hard on those spots that produced before. We started getting the current around 1:00 o’clock and we was hoping for that other big bite but it just didn’t happen.”

“There is nothing we could have done differently,” added Hill. “We have no regrets. We fished hard and we were competitive.”

“We don’t really know this lake,” said McKenzie. “We just set up and fished like we would at home. We had caught a good one and if we had moved we would have been guessing more than when we started.”

“I can tell you the secret to our success,” concluded Hill. “Five weeks ago I put a horse shoe in Kenneth’s boat. Since then he has won four tournaments and placed second here at Cabela’s today.”

“I ran Clearboard Planer Boards south of the dam both days,” reported Steve. “The bite was about 50 to 60 feet deep on skipjack. I just ran the ledges in the old river channel. Some folks like to run their boards real wide, but I run mine pretty tight to the boat. When I am done I have about a 60-foot spread. They are all equally spaced apart and you can basically cover the whole ledge. I am relatively new to the techniques but it is working out real well.”

Taking fourth place were Frank White and Aaron Preece, both of Chesapeake, West Virginia. They caught a total weight of 128.68 pounds to earn $1,000.00. The team fished south as well, towards the dam. They targeted their fish in 60-plus feet of water on the river ledges.  White and Preece fished with skipjack and shad guts from Big Kat Bait Company. They landed 15 fish during the two-day event.

Joey Pounders of Steens, Mississippi and Jay Gallop of Caledonia, Mississippi took fifth place. “They weighed in 116.08 pounds and earned $800.00. The team fished near Cairo boat ramp, just upriver from Flipper’s Bait and Tackle in 35 – 60 feet of water.

“We fished near trees on day one without much luck,” said Pounders. “We targeted rock walls and ledges on day two.”

Pounders and Gallop anchored using live shad to land 15 total fish for the weekend. They gave credit to their 10-foot B’n’M poles for helping land their fish and their X-Treme bait tank for helping keep their live shad healthy.

The remaining top ten finishers were:

Junior Angler of the Year – Chris Grose and Matt Renner.

Coe sent out a special thank you to Barry Young and his staff with the Sumner County Tourism Office for making this event possible. He also thanked Flippers Bait and Tackle for their hospitality towards the anglers.

“This time of year is tough on this lake because there is no current,” concluded Coe. “But we saw better fish than we have the past three years. We are looking forward to returning to the Cumberland River in Gallatin, TN in 2018. It will be a 2-Day Super Event on March 30th and 31st, 2018.”