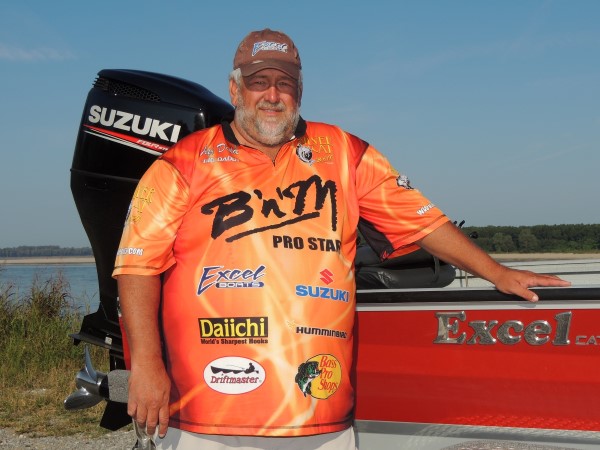 Jeff “Big Daddy” Dodd grew up in a fishing family. The passion was bound to rub off. His whole family loved to fish and he learned from them, but when it comes to catching catfish on rod and reel it was his own doing. His dedication to learning the Mississippi River led him to love it.

Now, even when he’s getting ready to end one fishing day he is thinking about the next one. He makes his living as a farmer, and that is top priority, but catfishing is next as witnessed on a September trip on the Mississippi near his home town of Trenton, TN, following a tournament in Memphis.

“I’ve got to get back to work,” said Dodd after spending a week in Memphis for the Mississippi River Monsters Tournament. “But I think I may be able to work it out so I can fish that Bass Pro Shops Big Cat Quest tournament in New Madrid, MO. Cotton won’t quite be ready.”

With those thoughts of the future the discussion changed to explore his past as it relates to his passion for fishing.

“When I was a kid my whole family like to fish,” explained Dodd. “My fishing goes back to my daddy and all his people. They would all go fishing and put out a bank pole. It would be an old willow pole with number 24 staging on it and an old rusty 6/0 hook. So now, don’t tell me those fish get to smart.”

“I just had to figured it out by myself.”

“I was raised up eating catfish too,” continued Dodd. “We fished for about every kind of fish there was. My daddy ate fish till’ he died. He didn’t care what kind it was. Bream, crappie, any fish, he didn’t care. And, he lived at home until he was 92 years old and he still was eating fish.”

“My daddy would catch a few flatheads on them old bank poles,” recalled Dodd. “He had a big old kettle out there with a burner under it. We would go fishing, bring em’ in wash em’ and clean em’. He would fire that kettle up. It was time to cook em’. He always kept a bunch of french fries handy and the neighbors would come down and we would have an old fashion fish fry. Anybody that came by could eat fish.”

“One day, when it looked like we was not going to have enough fish, daddy said, ‘You better start peeling some more taters, we gotta’ feed em’ something.’”

As I got older I followed in his footsteps. I got to where I could catch some decent catfish on bank poles so I decide I was gonna’ learn how to catch a big catfish on a rod and reel.”

Dodd describes his experience of learning to catfish on rod and reel as “a long hard journey with a lot of failures along the way.”

“I can tell you now, I did not have a whole lot of help,” offered Dodd. “I just had to figured it out by myself. There is a lot of difference in fishing the Cumberland and fishing the Mississippi. I could anchor anywhere I wanted on the Cumberland River. I could drift anywhere I wanted to. I didn’t know anything about draggin’ baits back then. I thought you had to be anchored to catch one.”

“I guess what really got me started bumping was the Tennessee River. Just like everybody did then, and still does, I bumped bottom on that river. I would go up there when the current was running, rig up with a 2/0 hook, bait up with some turkey livers and catch them 4 or 5 pounders all day long. Every once in a while, we would get hold of one that would break our line and we would think, ‘man that was probably a pretty good one.’”

The Barge Bite is not a Myth

“I was reading on the internet where some boys was saying the barge bite was a hoax,” said Dodd. “I’d say they ain’t done a whole lot of fishing. The barge bite ain’t no hoax.”
“I found that out when I used to fish on the rope all the time. Just straight anchor fishing. I’d be settin’ on a hole 30 minutes without a bite and a barge comes through there and you get one. Some bites are bigger than others and sometimes you catch three or four fish off a passing barge.”
“It aint no myth. You get on that depth finder and get close to one and you can see that it is churning that bottom up. You got 15,000 horsepower back there, and when they churn up that bottom, they are also stirring up the bait fish. You can be sure those fish are gonna’ take advantage of it!”

“Bumping bottom is all about what’s on the bottom,” said Dodd. “You got to be able to feel it. There are certain things that good anglers feel for. I catch a lot of fish out of a little spot I’ve felt. You would see me pause, and look at the rod tip. I may not have nothing, but that bait died right there in that little spot. Well, anytime that bait dies, that is where that fish is laying, waiting on the bait. I can’t tell you how many times I have paused, and just left it in one spot, when one just picked it up and hammered it.”

“I spent about 12 years learning the Mississippi River,” said Dodd. “I have spent days on that river without getting a bite. Days, just trying to figure it out. Trying to learn how to fish that river.”

“Finally, me and some of the boys got to sharing some information. I tried to take a little bit of what everyone knows and throw it into one pot. Now I hold back a little,” said Dodd. “But you gotta’ teach these new guys how to fish or the tournaments will be gone. They will die.”

“There is really no right or wrong way to fish. When you find out what works for you, that’s the way you are gonna’ catch fish. You just refine it for yourself.”

Dodd’s passion for solitude also led him to have a passion for big fish. He’s known for the nickname he gives to his big catfish─Old Sad Daddy. He credits a complete stranger for getting him started with the name that has caught on across the catfishing community.

“We were up there at Clarksville,” explained Dodd. “I didn’t have a big fish, he was just about 40 pounds. This old man came by the boat and looked in. He said, ‘man I think you got Old Sad Daddy.’ I just started saying that name when I had a good one and it went from there.”

Old Sad Daddy is just about the only fish Dodd wants to catch, but there are exceptions.

“If I am tournament fishing I don’t care if my partner catches every fish but one. I just need to get one. I need to get that one good one. That’s why I just like to run big bait all the time.”

Bait is a big influence on Dodd’s big fish passion. He says he’s caught big fish on small bait, but that is unpredictable.

“A big fish will eat a smaller bait if you get it in front of him. You just don’t want to run all little bitty baits or the little fish will worry you to death.”

“You also don’t want to get a little one out of where a big one lives. You might have a 20-pounder laying up above a big one. You don’t want to catch him and miss Old Sad Daddy laying right behind him.”

“Now if we already got two biggins’ in the well that’s different,” said Dodd. “I will scale down to get some unders if I have to, if I got to.”

Finding the big ones for Dodd begins with reading the river. He says it changes all the time and you have to be observant, looking for the seams, eddies and structure.

“Anytime you see a boil there is something down there,” explains Dodd. “It could be a tree or anything. In this river it could be a sunken barge. If you find one you want to fish around it a little while.”

He pointed downriver to a bank with no rock on it. “I will tell you something you can look for on the big river right here. If you see a bank with rocks on it, that is where the current is. That’s why the Corps put rocks on it, to protect it. I like to fish where the river leaves the bank. There will be an eddy there and the river will leave the bank. That water next to the bank will smooth out. The current will be sweet right there. Before I learned how to bump in the swift current that is what I looked for.”

“My preference is to scan the sonar looking for structure and fish,” offered Dodd. “I am a deep-water fisherman and I believe they like those deep holes. I’ve caught a lot of fish out of deep holes. When the river goes to rising I get my butt spanked sometimes, because those fish go shallow and I’m still fishing deep.”

“I once thought there was a set speed you needed to drift, but there really isn’t. I like to drift slow, I really do. The slower the better. I will go to 8 ounces of weight and slow my boat down just as much as I can. I like it that way. But I have heard people say you can’t catch fish more than two miles per hour. That’s wrong. I do it all the time.”

“I don’t know where one mile and hour come from, but that bait moves down the river faster than one mile per hour. I have seen days where the fish were not biting good and I sped the boat up. I think the faster speed does not give them time to think about it. You get what I call a reaction bite.”

Sometimes those reaction bites result in a big fish that starts running straight to the boat. Sometimes they even try to pass you.

“When they start running about 60, right towards you, that’s time to get serious,” said Dodd. “It’s time to put some line on the reel quick. That is usually the sign of a good fish. That’s what the big fish do. I have had them come all the way to the boat and not know it was a good one.”

Dodd will have plenty more “good ones” in his future, but he knows that future depends on catfish anglers to some extent.

“Where catfishing goes in the future will depend on how us anglers treat it,” concluded Dodd. “We have come a long way in the catfishing world, but we have to keep progressing. Things like selective harvest and CPR will help. I know we have to leave the resource better than we found it, and I strive to preach that when every I can.

“What I love most about catfishing is that when you get a bite, and lay back on that rod, it could be a five pounder or it could be the next world record of 150 pounds. You just never know.”