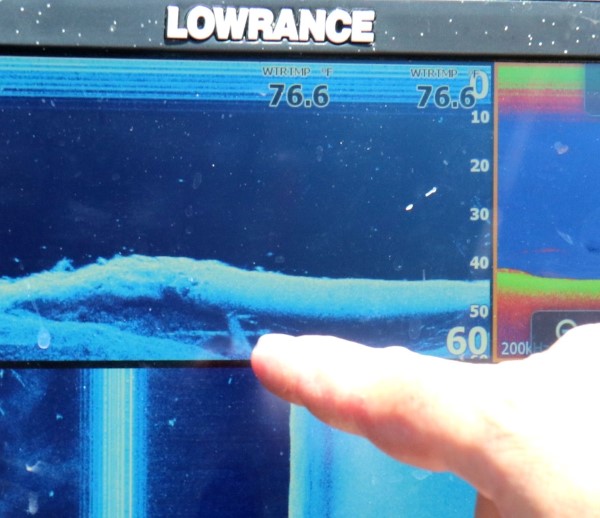 Saying I’m out of my elements in a catfish boat is an understatement. I’m comfortable in any crappie boat or crappie fishing situation but when chasing flatheads with two tournament pros, I’m out of my comfort zone.

My huge advantage was that the boat I boarded included Joey Pounders, Jay Gallop, and CatfishNow editor Ron Presley. Pounders and Gallop were set to do a show-and-tell on the process of catching flatheads with a method they call Aggressive Anchor Fishing. The following are five tips learned during the trip.

“Not setting the hook is a hard habit to break when you get excited during a bite.”

A typical method for catching bait is to watch electronics to find balls of shad and throw a net to catch them. That works great but Pounders and Gallop often catch bait during a tournament so time is critical.

“If we are catching bait while others are fishing we need a quick way to put bait into the boat,” says Pounders. “We push the shad with the boat into shallow water. It’s a matter of making repeated throws of the net until we get the size and number of bait we need.”

“There is no better tip for a novice than to have fresh, lively bait. Don’t crowd the bait tank. Pick the biggest shad with the most stamina. A 7- to 10-inch shad can catch a three-pound catfish but can also attract a 60-pound flathead.”

Use the electronics before ever considering stopping to fish. “We want to see fish, but that isn’t a requirement,” says Pounders. “We are looking for the right situation, depths and cover. If it’s a spot that should hold them we’ll fish it.”

The spot chosen on our trip was a 200-yard stretch of river that had thick cover along the bank of the Alabama River. There was very little cover above or below the spot making it a prime location.

Pounders continues, “The decision is a combination of electronics and your gut feeling from experience. We don’t see fish here but we have found trees in 25 to 40 feet of water so the fish should be there. We also have steep banks and rock walls with cover. We like to pull the boat up on the bank so we can keep the boat and baits as still as possible.”

Having quality equipment makes setup easier. Their trolling motor has Anchor-Lock, allowing them to anchor out in the river without having to drop physical anchors.

Current, depths, contours and the type and density of cover all play a factor in the boat position. Experience is an obvious advantage but a good position to the cover is very important. A little thought will put anyone in a good position.

Gallop says, “We often set our trolling motor on Anchor-Lock to hold us in a specific spot in the water. It works well but jamming the nose of the boat up on the bank is the most stable. Plus, if you do it in the right spot you can be in the shade when it’s hot in the middle of the day. That can make a more comfortable fishing situation.”

Pounders and Gallup spread baits around with poles placed in holders on the back of the boat. Lobbing a bait a long distance is a learned process. The trick is to be fluid so baits aren’t ripped off during the cast. The right pole is important, too.

Pounders says, “We seem to do better at 35-40 feet in the afternoons but only the biggest shad will stay alive down deep. We would rather fish shallower when possible. Pick your best shad that are lively. A person in a hospital bed can be alive but can’t run a sprint because they are sick. A shad can be alive but have nothing left to be lively and attract a fish. Our goal is to get 20 to 25 minutes from each shad.”

“We elevate our bait by using a 4-foot long leader from the swivel to the weight. We use a 12-inch leader from the swivel for the shad. We use a shorter weight line in shallow water and longer in deeper. In over 35 feet of water we’ll go up to a 6-foot line. We want the shad to be seen, active and up off bottom where he is easier to eat. If the bait is up and on one side of a log the catfish can still see and find it. If the bait is on bottom he will never see it.”

The way my fishing played out on this trip I have no authority to give advice, but am glad to pass along what the experts say.

Pounders says, “One of the biggest problems catching flatheads is not being patient. Most of the time it is going to be a very slow pull down and the fish will let it go. He will pull it down and let it go. Maybe on the third pull he will bury the pole. It might take seven times so be patient. A rod about halfway pulled over is our guide to know he probably has the hook in him. We want to err on the side of patience because the fish are hard to catch.”

The fish will often take the bait and back into their hole. Setting the hook will just pull the bait out of their mouth. We use circle hooks so we want him to turn his head to give us a better chance of hooking. Not too much pressure. Give and take a little bit. We reel as fast as we can but if he goes into a tree you just have to give him slack and play with him and sometimes you’ll still catch him.”

Gallop says, “Not setting the hook is a hard habit to break when you get excited during a bite. When the fish pulls down a lot but you don’t think he has it yet, just flip the bail and let him have more line. Once you are confident that he has the bait just start reeling.”

I had two huge fish on during my day with Pounders and Gallup. The pros estimated them in the 30- to 50-pound range by the force placed on the pole. Something that must be learned is the proper way to fight the fish. I must say that fighting a 40-pound flathead is a little different than a 1.5-pound crappie.

Pounders says, “It’s important to have only 5 to 7 pounds of drag coming out of the rod. A fish can shock the line with a sharp jerk if the drag isn’t loose. A proper drag will help catch more fish. Reel as hard as you can to keep him out of the trees, but have the drag set right. Fights won’t always end with a win.”

That last statement is definitely true. My first fish was on for a while but it really never stopped pulling drag. I couldn’t turn it. It went into what we figured was a hole. We could give slack and he was still on but we never moved him from the hole. The second fish was on for a short while but made a hard run straight into a submerged laydown and pulled loose. Still, the adrenaline rush was awesome.

It’s obvious that Pounders’ and Gallop’s flathead tactics work. That morning they caught several good catfish but none in the weight range they were hoping to catch. They put me on some good ones that afternoon but we didn’t land them.

Tip #5- Have the Right Equipment

“Poles are 10-foot B’n’M Silver Cat Magnums. They have a perfect tip to see bites and toss baits. The backbone handles any size fish. Reels are 20 to 30-year-old Diawa 7000 and 9000 reels. We use them because they are stronger than what we can get today. We use Driftmaster holders. Heavy duty, quality holders are a requirement.”

“Line is Vicious braid, usually 80-pound because of the structure. A fish rubbing the line against wood can break a smaller line. A three-way swivel is tied to the main line. A 50-pound mono line about 14 inches long is the leader to the hook. From the other leg of the swivel is 30-pound test mono about four feet long with a weight tied to the end. If it gets hung it can be broken off and another weight and leader added without losing our hook. Hooks are Gamakatsu #8 circle hooks. Our weights are nuts and bolts because we can usually find them free. We can use a big bolt and if we need more weight just screw a nut on it.”

Why target flatheads? The team says they learned to fish for flatheads on their home water that has few blues. Today they use live bait and look for fish other tournament fishermen aren’t targeting, saying “We are throwing chicken when others are throwing steak.”

They have not wet a hook during tournament practice days in two years. They believe their time is better spent using electronics to study spots to fish. They give each waypoint a rating up to four stars. Plus, they are not catching fish they’ll need during the tournament.

“A fisherman who can’t find or don’t want to go after fresh bait can use goldfish or bluegill but they are not as good. I don’t like bluegill because they are too smart and will swim into the cover and hangup,” says Gallop.

As a first timer, I was fortunate to go with experienced, expert fishermen. I dropped the ball by not keeping the big fish from getting into the cover and eventually getting free although I was told it is part of catfishing. My dream of a big catfish was definitely on the hook but it didn’t happen. However, my adrenaline rush was on overload. I can’t wait to get back and try it again.