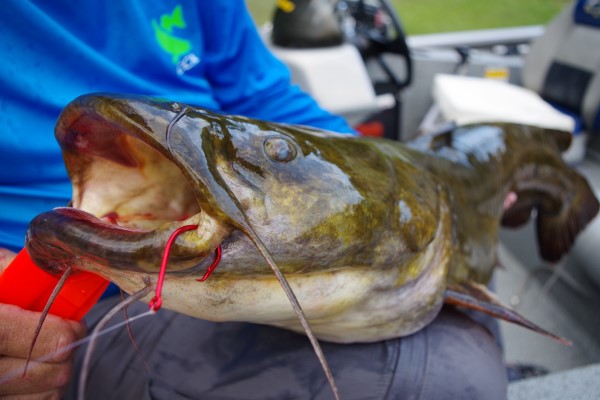 You’ll catch more flatheads if you understand their unique behaviors.

Look at a flathead catfish and you can tell immediately that this fish is quite different from its relatives, the blue cat and channel cat. From its mottled brown to yellow coloration to its protruding underlip and broad flattened head, ol’ Pylodictis olivaris possesses an appearance so unique it is instantly identifiable. Even novice anglers know how to distinguish it from other species.

As befits a fish so unique, the flathead also exhibits many behavioral traits that contrast sharply with other species of whiskerfish. Anglers who catch flatheads regularly—and these folks comprise a small percentage of the catfishing population—study these mannerisms and use what they learn to help them find and hook these fussy fish. If you want to improve your odds for catching a big flathead, that’s something you must do, too.

To start, read the paragraphs that follow and learn the feeding and locational behaviors that can help you pinpoint flatheads and entice them to bite.

Studies show that flatheads up to 2 feet long subsist primarily on a diet of invertebrates, mostly crayfish when they are available. So, when you’re hoping to catch some eaters for the dinner table, crawdads and other invertebrates such as night crawlers make ideal bait choices.

Small flatheads also scavenge to some degree and will, in some situations, take prepared stinkbaits, dead baits, chicken liver and other smelly enticements.

“If we want to catch flatheads specifically when we go fishing, we must acquire an in-depth knowledge of their habits and apply that knowledge to the ways we fish.”

Flatheads greater than 2 feet long eat mostly fish. Favorites differ from one body of water to another, depending on what’s available, but these include forage fish such as sunfish, suckers, chubs, shad and other catfish, particularly bullheads.

In these regards, flatheads aren’t much different than channel cats and blues. Small individuals of all three species can be caught on a wide variety of baits, but larger individuals are more likely to prefer offerings of fish. Flatheads differ, however, in their preference for live offerings, particularly trophy-class flatheads, which almost always prefer live foods over dead. Thus, for consistent success, savvy flathead anglers use live fish for bait and nothing else.

There are exceptions to this rule, as there are to all rules, but flatheads exhibit such a liking for active, moving fish baits, it doesn’t make much sense to use anything else if you want to enjoy the highest catch rate.

Tough to Catch in Winter

Here’s another thing worth knowing. In temperate climes, flatheads feed year-round, but feeding almost ceases during the peak of spawning season, and they feed little or none when the water temperature falls below about 45 degrees F. They rarely are caught in winter, unlike blue and channel catfish, because they enter a period of torpor (similar to hibernation) and rarely eat.

Knowing this, you’ll want to avoid wasting your time fishing when the water is ice cold. Your odds for success will be much greater if you concentrate your efforts during periods of high activity in spring, summer and fall, like high-water periods in spring and during the fishes’ “fattening-up-for-winter” period in fall.

You’re likely to enjoy better fishing for trophy-class flatheads if you and your fellow anglers release larger specimens. Ten years are required to grow a 30-pounder, even under the best circumstances. Flatheads exceeding 50 pounds are relatively rare individuals that may be 20-30 years old. If you remove a trophy flathead from a river or lake, decades may pass before it is replaced by a fish of comparable size.
Small flatheads are much more common than big ones, so if you’re fish hungry, keep some smaller ones to eat. Resist the temptation to keep the heavyweights, and encourage others to do likewise. Shoot some photos, then carefully remove the hook and release the fish back into the water.

Flathead catfish seldom thrive in large numbers in small bodies of water like ponds and creeks where channel cats and blue cats do just fine. However, flatties are well adapted to life in rivers, larger man-made reservoirs and many natural lakes where healthy populations often produce excellent fishing opportunities.

River flatheads generally avoid heavy current. They prefer to hold in slack-water areas behind current breaks or in backwater areas with dense cover. At times, however, they will feed in swift water at the ends of dikes and in tailraces below dams.

When looking for flatheads during daylight hours, focus your attention on areas with dense woody cover, the preferred home sites of these ambush predators. A heavyweight flathead will often squirm its way inside a tangled pile of brush, then turn to face outward from its hiding place so it can watch for forage fish it will dart out to catch. Toppled trees in the outside bends of rivers are favored hiding spots, too, as are floating piles of driftwood and cavities beneath logs or rocks.

To catch these well hidden fish, you’ll need to determine ways to present live fish baits within such areas. A slip-float rig fished with a 7- to 9-foot rod often work best as you can more easily control the movements of your live baitfish. The long rod allows you to lift your line off the water and “steer” your bait to hotspots while keeping it from tangling you up.

At night, flatheads become more active, leaving their brushy sanctuaries and moving into more open, shallower waters to feed. This is when you’re more likely to catch them on live baits presented on the bottom near structure features that guide their movements. Creek-channel edges, tributary mouths and underwater humps often prove productive after the sun goes down.

When fishing for channel cats or blue cats, it’s not uncommon to catch several fish in one spot that are actively feeding in loose schools. Adult flatheads, on the other hand, tend to be solitary and often are aggressive toward others of their kind. A single parcel of prime cover will usually yield only one full-grown flathead—perhaps two if you’re lucky.

Flatheads aren’t very mobile either. During the course of a year, they usually roam no more than a mile from the single unit of cover they call home. Blue and channel catfish often travel great distances as the seasons change—sometimes hundreds of miles.

These two characteristics affect the catch rates of many catfish anglers, especially those of us who enjoy fishing from shore. If you fish primarily from the bank and not a boat, you must depend on the enticing movement, taste, and smell of a live baitfish to draw your quarry in. Problem is, flatheads don’t move much, and when they do, they roam alone. An angler working a pool from the bank is lucky to catch one decent flathead during several nights of fishing.

The best fishing strategy, when possible, is to use a boat to move from one likely flathead hideout to another, fishing each for 15 to 30 minutes before moving to another spot. In this way, you’re much more likely catch several nice flatties during your allotted fishing time. The angler who fishes one spot only will often come up empty handed unless conditions are such that flatheads are roaming more in search of dinner.

Many people fish for flatheads using the same techniques used for blues and channel cats. But as you can see, flatheads have very unique behaviors that make them different from their cousins.

If we want to catch flatheads specifically when we go fishing, we must acquire an in-depth knowledge of their habits and apply that knowledge to the ways we fish. Only then can we expect to be successful in our efforts to battle with these incredible freshwater sportfish.