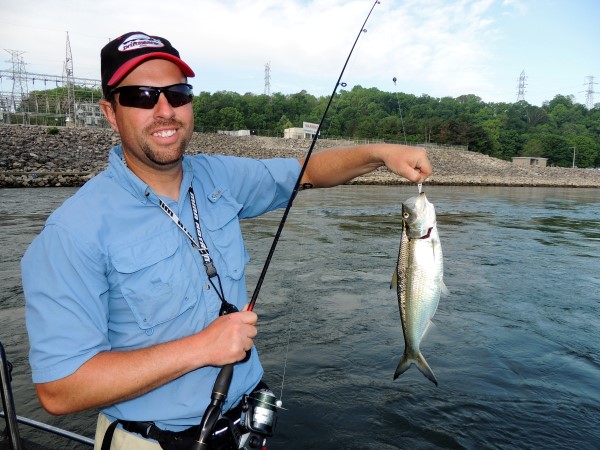 A slow overnight flow of water left an obvious scum trail on the surface. Visually it helped identify a very well-defined ridge in about 25 feet of water. Tennessee River catfish guide, Ty Konkle, knew this ridge was exactly what he was looking for as we moved downriver on a trip that would break some flathead myths.

As many anglers do, Konkle identifies his fishing holes by a fixed structure on the shore. In this case, we set up on the “cutie tree hole.” If you can find his cute little tree along the shoreline, downriver from Nickajack Dam, you have found one of Konkle’s favorite spots.

Before heading to the “cutie tree hole” we made a bait stop below the dam. Rigged with his favorite Foley Spoon, it didn’t take long to put some bait in the cooler.

“I like to put about 12 to 15 fresh skipjack in the boat to start the trip,” reported Konkle.

“Sometimes skipjack heads do better than chunks. Early in the year heads seem to be best. Later in the year, I do better on chunks. We will start off with three heads and three chunks, and see where the bite goes.”

There were a couple of gates open at Nickajack Dam. “Current makes more difference in the flathead bite than with blues,” instructed Konkle. “Flatheads are lazier fish, they don’t roam like the blues do. The current doesn’t seem to affect the flatheads like it does the blues. It seems like the bite suffers a lot on the blues when the current is slow or nonexistent.”

Konkle placed six B’n’M Silver Cat Magnums out the back and to the side, with one out towards the cutie tree. His boat is equipped with 0- to 30-degree Driftmaster Rod Holders. Since we were fishing on the rope he placed the baited rods in the 30-degree position. The rods were pointing skyward and each one was reeled up to a relatively tight line.

“I wanted a tight line because there are trees down there in the hole,” said Konkle. “You can always hope that the big dudes swim to deeper water, but if you give them an inch they can be gone in a tree pretty quick. That’s why I am using 50-pound line.”

The scum line had lots of branches and stuff that can foul a fishing line. As long as no big branches come floating through the lines it is not a big deal. Konkle occasionally picks up a rod and guides the line around some flotsam that threatens to snag it.

We were ignoring the myths about flatheads that say fishing at night with live bait is the only way to go. Konkle did admit to using live bait more after the spawn, noting that every reservoir is different.

“Some say live bait at night,” noted Konkle. “It certainly works sometimes, but all my big flatheads have come during the day. And usually on cut bait. I’ve had many flatheads over 60-pounds and only one came on live bait. At least that’s the way it’s been in this neck of the woods.”

Konkle uses a simple sliding sinker rig with a circle hook. He starts by threading the mainline through a sinker slide and then a protective bead. Add a barrel swivel and clip on a weight appropriate to the current. Next add a two-foot leader and a circle hook. That’s it, sweet and simple. Occasionally, in clear water, he will add a peg float between the swivel and the hook, lifting the bait up off the bottom.

Suggesting that there are some days you get nothing but flatheads, Konkle indicated that he did not care about the size of the first one, he just wanted to catch one. To Konkle, one flathead of any size indicates that more are on the way.

“We just need to catch one to get it started,” said Konkle. “It could be completely different tomorrow. The blues could shut off and the flatheads feed. Or, it could be all flatheads and no blues.”

Konkle describes flatheads as lazier fish, based on the behavior he observes from his pet flatheads in his tank at home. “The ones in my tank, when they start moving, they run forward a little and then set. Almost like a 4-legged cat. They will be on the trail of something. They just take their time. So, you gotta’ take your time too when fishing for them. Usually, the 15- to 30-minute window is when you get the first bite. An exception is getting a bait right in front of a tree. Sometimes that is when I get that quick bite.”

“On the flats, it might take a little longer, but If I get one, I expect another. I think they see one eating and think they need to eat too. Once fish start biting, that is the start of the window. When that bite is over I usually move on to another hole. I will leave the hole, but time permitting, come back to it later.”

After catching a couple of decent blues and breaking off what Konkle thought may have been a flattie, we moved on.

“We will try a little basin that has slack water in the tail end,” advised Konkle.  There is a lot of timber, it is pretty shallow and has a big eddy in it. It’s a good flathead spot. A lot of bait holds in the current seam and it has tons of structure on the bottom.”

The new hole was much shallower than the previous spot. Konkle quickly reminded me to keep the lines tight.

“I don’t want a lot of slack in the line,” instructed Konkle. “If one hits it I want the line a little tighter than in deeper water. There is just too much timber and rocks to let em’ have much line.”

We immediately hooked up a good fish in the new hole. After about a one-minute fight, that includes one session where the fish was snagged up, the line broke. It caused Konkle to add a word of warning.

“When you break off a good fish, check the line real good,” said Konkle. “There is probably a reason the line broke. The line may have been rubbing on timber or rocks and there is a possibility of damaging several feet of mainline. I have cut off as much as eight feet that had been damaged in a fight. Simply run the line through your fingers, you can feel the nicks. Once you find the smooth line again, cut the line, dispose of it properly and retie the rig. If you don’t do this, you might just lose your next fish too if it is a big one.”

“The pull of the fish could only be described as powerful.”

As we waited for the next bite Konkle continued to describe the parts of the river that he like to fish.

“I like to find a deep stretch that has a good flat with a lot of adjacent structure. I want a place where they have someplace to hold down during the day and then move up to feed along all that structure. They like lots of rock and debris.”

As we talked Konkle constantly glances back to the rods in anticipation of another bite. It happened often, and several times we had two fish in the boat at the same time.

Then, the bite we had been waiting for came. The B’n’M Silver Cat bent over slow and steady. It was a classic big fish bite.

“That’s a big fish,” shouted Konkle. “That ain’t no skinny minny. It’s a big flattie and he is swimming right at you. Sometimes they just pull it down off the ledge and move toward the boat. When you feel any kind of slack like that you need to catch up with him. If we can make this happen it will be your new personal best, I can almost guarantee it.”

I was not making much ground with the big fish. It was a strategy of just keeping good pressure on the flattie. It is better to be safe than sorry. The pull of the fish could only be described as powerful. I was doing the saltwater pump and reel routine, but I would gain some line and the big fish would take it off again.

“See how he just sticks right down there on the bottom,” said Konkle. “There is not much you can do when a big flattie turns back towards the bottom. A good flathead fights so good. You will get em’ right to the side of the boat, but you can’t get them off the bottom. You start working them up and you hear that drag screaming and they take it right back to the bottom. No headshake, nothing but pure power.”

The beast finally came to the surface and Konkle was able to grab the big flathead and pull him into the boat. The fish had managed to swim through another line and made a mess of things, but it was more than worth the trouble.

Konkle’s prediction was right. The big fish was my personal best flathead at 46 pounds. It was a fat, pretty fish on my first day below Nickajack Dam. I was already looking forward to the next day.

After some quick photos and video Konkle carefully eased the big flathead over the side of the boat for resuscitation and release. Personally, Konkle is 100 percent catch and release only, but he allows his clients to keep fish under 15 pounds if they want some fish for the dinner table.

“Do you feel that water in your gills,” asked Konkle? “That feels good, doesn’t it. We did battle and now you are going to be a very famous fish.”

About that time the big flattie gave a big kick and disappeared in the brownish water. There was no doubt that he would swim back to the bottom and give another angler, another battle, on another day.

“I think that pretty much wears this spot out, it’s time to move on,” suggested Konkle.

We came back the next day and fished the same strategy in some different holes. The result was yet another personal best flathead. The day-two flattie measured 50 inches long and weighed in at 61 pounds. No one will be surprised to hear that I am ready to fish Guntersville again.

Ty Konkle operates FV-Catfish Guide Service. He guides on Chickamauga, Nickajack, Watts Bar, and Guntersville reservoirs. Konkle can be reached at 423-307-2983. You can view his website at www.fv-catfish.com and videos on his YouTube channel.