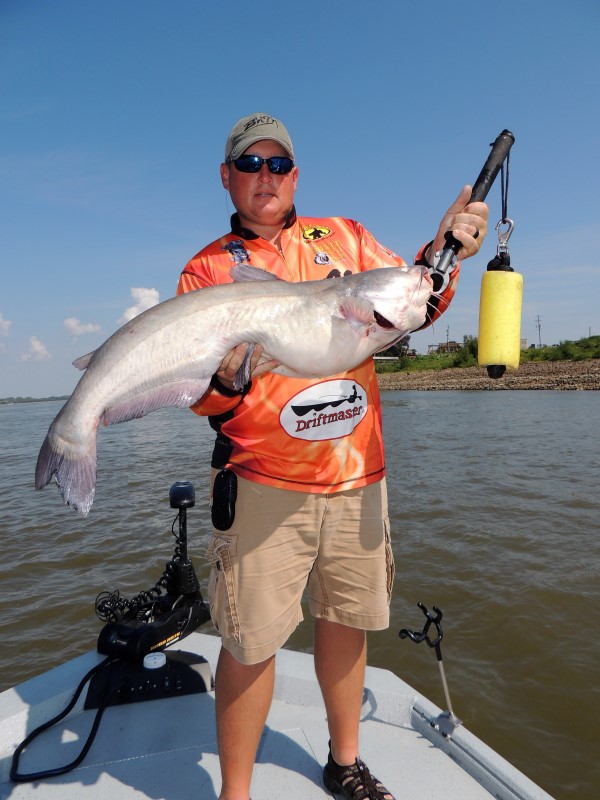 Catching the passion from the best

It was only natural that Roy Harkness would catch the catfishing bug. His passion for catfish would increase as he grew older and started wanting to catch bigger fish.

“I work farming for my father-in-law, Don Sweat,” offered Harkness. “I also fish with him. I farm a little on my own too. We farm cotton, corn, and soybeans in the Mississippi River bottoms of West Tennessee.”

The key words in that last sentence may be “Mississippi River bottoms.” Harkness not only grew up there, but he currently lives 10 to 20 minutes from two different boat ramps so he has great accessibility to the Mississippi River.

“I have been addicted to fishing as long as I can remember,” said Harkness. “Early in life it was fishing farm ponds for bluegill and crappie. Actually, I would fish anywhere I could wet a hook.”

“My dad was a Park Ranger when I was younger. We would go bream fishing in the Fort Pillow State Park lake every day during the summer, after he got off work. My grandad (who was blind) and I would sometimes sneak down to the creek with hot dogs and worms to try to catch something. Sometimes it would just be a gar or drum).”

The Mississippi River was his fishing hole. “We would tight line fish from the sand bar,” remembered Harkness. “We would catch fish for eating and every once in a while, we would catch a 15- to 20-pound fish. That was big to me back then.”

Like many other anglers, as he grew older Harkness had a yearning to catch bigger fish.

“When I was in my 30’s I started wanting to catch bigger catfish. I tried drifting, but just couldn’t figure it out. About seven years ago, for my birthday, my father-in-law booked us a guided fishing trip on the Tennessee River with Phil King. Phil taught us to drift, and we were able to catch some nice fish. It was the first time that I successfully bumped, and boy was I hooked.”

King not only put Roy and Don on fish, but he taught them what they were doing and why. “He gave me information on what to do and what to look for,” explained Harkness. “I took that knowledge and went to the Mississippi River and started trying to learn how to fish there, in my home waters. Man, I can tell you, I lost some hooks and lead for quite a while. I kept on trying what I had learned until I got better at it.”

“One day it just clicked. I knew what I was feeling; I could tell how the bottom changed; I began to know if it was sand, mud or rock, because of King’s instruction. I love to drift, or bump, whichever you prefer to call it. I love the challenge of finding new water, of trying to convince something to bite my hook. I don’t just drift something for no reason. I try to find out why the fish are there.”

“One day I went fishing on the Mississippi River,” recalled Harkness. “That’s where I met Jeff Dodd. “He was fishing by himself, and as most folks know, he will help anyone with their fishing skills. I was mainly trying to learn anchor fishing at that time. He showed me how he ties his hooks and gave some other equipment suggestions. He actually gave me some rods which I still have today.”

“He made me earn his trust, but once I did we’ve been friends ever since. I didn’t want to know where he fish, but what to look for. Now we share with each other. Sometimes we can be fishing somewhere out of town and bump into each other. He or I may ask, ‘What do you know about this?’ Or sometimes he ll say, ‘Boy you need get out of here,’” joked Harkness.

Harkness was never bashful about introducing himself to angers and talking catfish at the tournaments. It is really a testament to seasoned catfish anglers and their willingness to help the ones just coming up.

“I love the challenge of…trying to convince something to bite my hook.”

“I met the Masingale brothers at Osceola,” recalled Harkness. “It was my first tournament and they won it. They are a library of catfishing information.”

“I fished several tournaments with Chris Stout,” stated Harkness. “He taught me so much. I really enjoy fishing with Chris. He is one of the best in the business. He’s the one that told me not to do what everyone else does. Instead he said to take what others share and make it your own. I have tried to adopt that advise.”

“All the names that I mention frequently share what they know about catching catfish with other anglers. You don’t have to fish exactly where they fish in order to catch fish. The rivers are large, so you are able to find other places that are similar to the ones they fish. I may ask them what type of area they fished, but I never ask where they caught fish. I like to find new places and do it on my own. I like the challenge and learning experience.”

One of his best days came in 2017. He was fishing a tournament with his father-in-law. The river was rising and it had rained heavily a few days before. Debris and logs were floating everywhere. It was decision time.

Their first decision was to leave later in the morning. They had a spot they wanted to fish but weren’t sure about river conditions. Once they got on the river the trash was terrible. Their second decision was to find a likely spot closer to the ramp.

“Don, my father in law, mentioned that he just needed to catch his personal best. Five minutes later, he has one smoking his drag. I said, ‘There he is!’ I netted him, and he was right at 60 pounds.”

“We continued to drift another time and caught some 20’s. The smallest fish of the morning was 17 pounds.  At 11:00 AM we quit fishing, eased back to the boat ramp, and waited on the weigh-in. That was an awesome day – some of the most fun I have ever had. Sometimes, we over think things, when we should really just go out and fish.”

One thing that tournament fishing teaches is conservation. Those anglers that enjoy the competition and the big fish caught at tournaments understand it better than most.

“Conservation is a big key to the continued success of the sport as well as the future of the fish,” offered Harkness. “We don’t have to lecture those who don’t do as we do in using catch-photo-release (CPR), but we can try to educate them. Protecting our waterways, our fish, wildlife, and environment is very critical for our kids to have access to the same great resources that we have been blessed with. I hope that someday my boys are helping me get in the boat, saying, ‘Come on dad, let’s go fishing.’”

Harkness is creating that possibility by taking his kids fishing now. Thinking about fishing with his kids conjured up a story from back in July.

“Luke my youngest son, my father in law Don, and I was fun fishing on the Tennessee River. We were just messing around catching some 8- to 15-pounders. We were getting ready to go and I decided to drift through some structure I had marked. As soon as we got to it I caught a 63-pound blue. That’s what’s fun and the kids love it. You know these little guys I take fishing are critical to the continuation of the sport. We have to start teaching them young for them to understand. What better way to teach or lead than by example.”

“The key when fishing with kids is to keep it fun and simple,” instructed Harkness. “I try to run smaller baits, to get more bites. I try to fish for numbers versus size. My kids love to catch fish. Every bite they will say, ‘Oh dad, this is the big one.’ Also, bring plenty of snacks. My boys can eat a grocery store when they are out there fishing.”

“I fished my first tournaments about five or six years ago. I fished the West Tennessee Catfish Anglers tournaments, Big Cat Quest, and just about anywhere that I could. I enjoy the challenge, and I want to make myself better.”

His success is well deserved. His passion for catfishing has led him to do whatever it takes to improve himself. He does it with confidence, determination, and persistence.

“I want to be remembered as someone who respected others as well as the sport. Someone who gave 100 percent all of the time. Someone who put in the work and time on the water, in order to get better. I am one of those people who will keep trying until I figure it out.”

“When I’m drifting, and I have my rod in my hand, the anticipation of not knowing what that next bite may be keeps me going. It might be a 5-pounder or an 80. The suspense is always there. Anything is possible, so stay positive you never know what the next bite may bring.”

“Fishing is my escape from stress, busy life, negativity, and work. I love it when my wife and kids go too. When they have a big cat peeling drag, the looks on their faces are priceless. Sometimes I loosen the drag to make them think the fish is even bigger than it is.”

“I love to fish,” concluded Harkness. “I plan to continue fishing, as long as God will allow me to.”