Getting Birdy for Cats 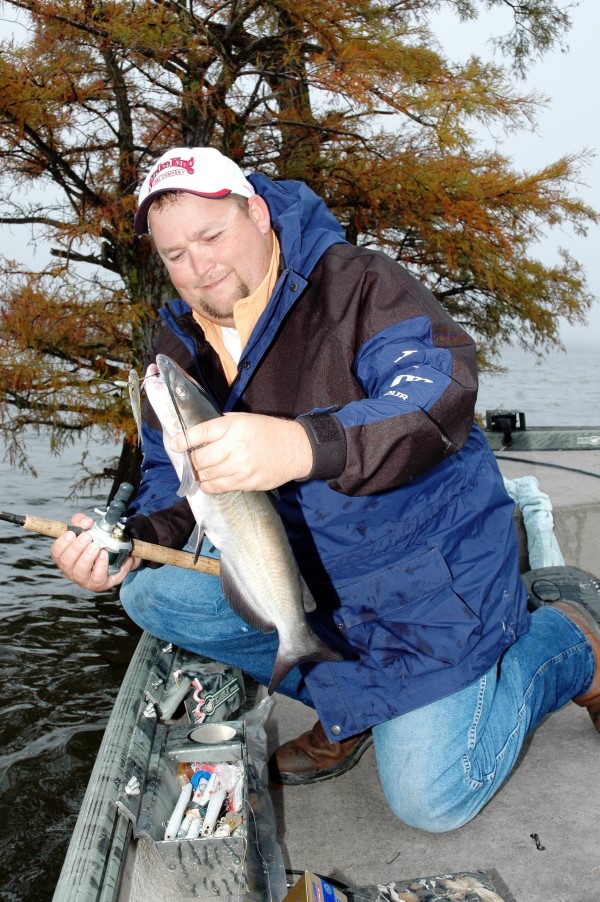 How do you get a cat out of a tree? Easy. Flip in a fresh shad!

In both fresh and salty waters, many anglers watch birds to find fish. Predatory fish push baitfish toward the surface. Frenzied seagulls and other birds see that activity and swoop down to get their share of the bounty.

However, some catfish anglers watch for different birds not in a frenzy. In recent decades, populations of federally protected double-crested cormorants and other fish-eating birds exploded across North America. Cormorants often gather in huge flocks on major lakes, an indicator of fish in the area. After diving for fish, the big black birds frequently sit on logs or tree branches with their wings outstretched to dry.

Vile to Humans. Delicious to Catfish.

Because these big black fowl eat so many fish, and smell like it, many anglers detest these birds. However, some catfish anglers have learned to love the foul fowl.

After filling their bellies with fish, cormorants often roost in trees or other perches and take a nap. Cypress trees frequently grow in water up to seven feet deep, making excellent roosting spots for birds. Old, standing timber or forested shorelines also make great places for fat birds to rest.

While sitting in the trees, the birds inevitably relieve themselves. Waste deposits can stain tree trunks, branches and foliage white, but some of it drops into the water. What smells vile to humans becomes a tempting buffet to hungry catfish.

With about 10,000 taste buds per square inch in its skin, a catfish swims through the water like a giant tongue tasting everything. It can detect minute food particles or scents over long distances. Sensors can perceive odors down to one part in 10 billion parts of water. When the malodorous fishy smelling “deposits” hit the water, catfish smell it and come looking for an easy meal.

“I was bass fishing one day, flipping jigs against cypress trees and caught an occasional catfish,” recalled Billy Blakley, a guide for Blue Bank Resort (877-258-3226, www.bluebankresort.com) on Reelfoot Lake in Hornbeak, TN. “Later, I brought out some shad, flipped them next to tree trunks and wore the catfish out. The birds were just tearing up chum and moving it from one part of the lake to deposit it in another.”

Birds find abundant places to perch on cypress-studded Reelfoot Lake. The entire waterbody looks more like a cypress swamp than a lake. From December 1811 until February 1812, four extremely powerful earthquakes ripped the area. For a time, the Mississippi River actually reversed course to flow northward into the fissure, inundating existing swamps. Now, the 18,000-acre “Quake Lake,” averages about 4.5 feet deep, but some holes drop to about 18 feet deep.

What works at Reelfoot Lake could work in any lake, river or impoundment with abundant fish-eating birds, good catfish populations and numerous places for birds to perch. Some other great lakes for this type of fishing include Toledo Bend and Caddo Lake on the Louisiana-Texas line, the Santee-Cooper lakes of South Carolina and many lakes in Florida.

Get a Later Start

Many anglers wait to start catfishing until later in the morning, after birds ate a good fishy breakfast and take a siesta. Another strategy is to fish for other species at first light and try the trees for cats later. In the fall and winter, the sunshine warms the water a bit, making catfish more active later in the day.

“This kind of fishing works best on a sunny day,” Blakley advised. “The brighter the sunlight on the water, the tighter catfish hang to the trees. People don’t have to get up early. It’s a really good technique to use in the middle of the day.”

When preparing to fish the trees, first look for birds. Whenever possible, find birds that have been sitting in trees for a while. Failing that, look for trees freshly stained with waste in or near water about three to six feet deep. Also look for any activity around the tree trunks that could indicate feeding fish.

“I like to fish under a ‘fresh’ tree,” Blakley explained. “I like to find a tree with birds sitting in it and run them off. If they’ve been sitting in the tree for a while, I know I’ll catch fish. When I see the trees with white on the leaves and branches, I know I’ve found fish.”

Typically, birds fly off as someone approaches. After chasing off the birds, attach a whole threadfin shad to a 4/0 hook with no weight. Flip the bait as close to the tree trunk as possible so the shad flutters down into the water. Frequently, the bait never makes it to the bottom before a catfish slurps it into its mouth. If a bait does hit bottom, let it rest a few seconds. Then, pop it up a bit and then let it slowly sink again.

“When it’s a calm day, I don’t use any weight at all,” Blakley recommended. “I just flip the shad against the tree trunks. The shad naturally drifts to the bottom. When it’s windy, I use a leadhead jig or a slip sinker to get the bait to the bottom. Flipping for catfish under the trees is a very simple technique. It’s a great technique for teaching children how to fish.”

On cold days, catfish would probably prefer the sunny side of a tree. On warm days, they might like the shady side, but they could hold anywhere. On any day, always fish completely around a tree trunk whenever possible and try to determine patterns. Catfish usually bite immediately or not at all. Some trees might produce several good catfish quickly so keep fishing a spot until nothing else bites. Don’t waste time fishing an unproductive tree. After a few minutes with no action, use an electric motor to move to another nearby tree.

“A cypress tree has a lot of places where a catfish can hide and lines can hang up,” Blakley advised. “I use a medium-heavy bass rod, but people could use just about any rod or even a cane pole. I recommend braided line or something strong to pull big catfish out from under the cover.”

Fishermen typically catch channel catfish around the trees. Channel cats eat practically anything. Anglers can use any popular catfish baits, but cats attracted to that smell expect to find fish. People using live bait might also catch flatheads, blues or even bass and crappie.

“The more it smells, the better channel cats bite it,” advised Brian Barton, a Tennessee River catfish guide (www.brianbartonoutdoors.com) from Muscle Shoals, AL. “If they’re in an area, they are going to bite. Channel cats tend to like shallower water and usually seek out structure. Channel catfish usually school in small numbers, so if you catch a fish off a piece of structure, continue to fish the area.”

In a good lake, anglers can flip for cats at almost any time of the year. However, the best fishing generally occurs in the fall and winter as migrating birds augment local populations. The spring can also produce excellent action as birds migrate north and stop periodically to feed and rest.

Why call it Reelfoot?
According to legend, Reelfoot Lake derives its name from an Indian chief with a deformed foot who lived in the area in the early 1800s. In the legend, the Chickasaw chief wanted to marry a Choctaw princess, but the girl’s father refused. Chief Reelfoot planned to kidnap the princess, but the Great Spirit wouldn’t allow it. When the chief disobeyed and attempted to snatch the girl, the Great Spirit stamped his foot on the ground, causing a massive earthquake that destroyed the chief’s village and created the lake.
In another theory, maps before the 1811-12 earthquakes show a stream labeled the Red Foot River where the lake now stands. An 1835 map shows a body of water named Wood Lake because of all the trees in it. Cartographers theorize that a mapmaker could not read the writing on older maps and mistook the “d” in Red for an “e l,” thus giving the lake a new name that remains to this day.