Monsters on the Ohio: Leading the Charge for Catfish Conservation 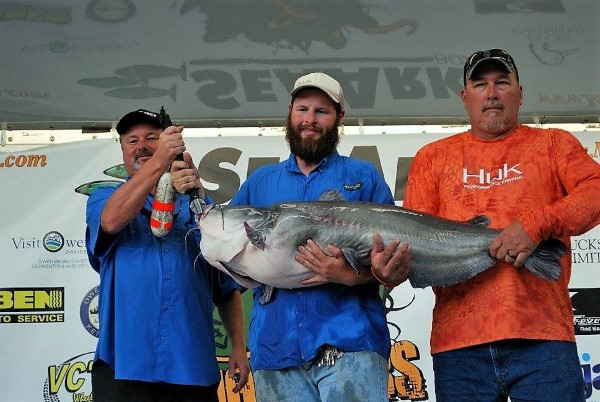 English Park in Owensboro, KY has been the home of Aaron Wheatley’s Monsters on the Ohio since 2010. Each year the park, the city and the Ohio River become a beehive of activity as catfish anglers from around the nation travel to Owensboro to participate in one of the most anticipated tournaments of the season.

Monsters on the Ohio is a catch and release tournament. The basic rules are simple. Fish can only be caught by rod and reel; No foul hooked fish will be accepted; A maximum of 8 rods per boat are allowed; and only 6 rods are allowed in the water at any given time.

Wheatley has long been an advocate for the health and propagation of trophy catfish. That passion led him to naturally include catfish conservation as an important element of his tournament strategy.

Conservation has become more important to anglers in general, and is in fact one of the reasons that Wheatley started Monsters on the Ohio.”

“With me being from here in Kentucky, conservation is one of the reasons I started my tournament,” explained Wheatley. “I wanted to show the guys at the Kentucky Department of Fish and Wildlife Resources (KFW) what the possibilities are with this natural resource that is right here in our waters.”

“KFW complains, that they don’t have enough money,” remarked Wheatley. “But if we promote it more anglers will come to town. They will buy an out of state license which brings in out of state money to KFW. It will also bring tourism to these towns. I wanted to raise awareness that we have a valued resource that needs to be protected. I wanted to show how to do it right.”

“I actually send letters and/or emails to every commissioner on fish and wildlife and invited them to Monsters on the Ohio. Every year FWC biologists are here. They are measuring fish, weighing fish, they are checking fish health. So, you know we are working as best we can with fish and wildlife. We have nothing to hide. We are in this sport to protect this resource and we don’t need to hide that. We want people to know we are going above and beyond to protect these fish.”

As a tournament angler and director, Wheatley considers the most important part of taking care of fish is from that point when the boat comes out of the water to when the fish gets to the scales.

“I like to see the fish setting on the river where anglers can just keep pumping fresh water to them,” said Wheatley. “One of the most important things we do to protect the fish relates to our weigh-in line. It is really only about ten boats long. We prefer that the guys stay out on the water with their fish, instead of waiting in a weigh-in line for an hour or hour and a half with their fish in the livewell. We keep a short weigh-in line because we think it benefits the fish.”

A quick calculation shows why this process is successful at reducing time in the weigh in line. Saving just 30 seconds per boat, with 100 boats, saves 50 minutes. More boats, more savings. That is a benefit well worth the effort and it is accomplished with volunteers that have the same desire as Wheatley to protect the fish.

“That one thing, providing drivers for the weigh-in line, has really separated this tournament from others with respect to the speed of the weigh-in,” offered Wheatley. “We let the teammates get in the boat as the volunteer drives the truck, boat and trailer through the line. It allows the team to enjoy the weigh-in together and it makes the weigh-in line go faster.”

Wheatley and his volunteers have done other things to speed up the process of weigh-in.

“We go back about two boats deep in the line and have the anglers pull their small fish out,” detailed Wheatley. “So once that boat pulls up in front of the crowd the guys are not spending time chasing small fish down in the livewell while they are setting there in front of the stage. They are already in a basket before the boat reaches the stage. All they gotta’ do is pull out the big ones.”

Not only does that speed up the weigh-in, it is good for the crowd. Spectators are there to see those big fish and the team has time to show them off.

“…the most important part of taking care of fish is from that point when the boat comes out of the water to when the fish gets to the scales.”

“We also have tanks there at the stage with oxygen running to them,” explained Wheatley. “If someone has a fish that they feel is in danger before the weigh-in, we let them go ahead and bring that fish up. We will weigh that fish separately and then when the team comes in with the rest of their fish we will add that weak fish weight to the total.”

Once that weak fish is weighed it goes into a 200-gallon tank to received oxygen and resuscitation. Once it is has recovered and is in good shape, the fish is released back into the Ohio River. The tank is there for the purpose of taking care of any fish that is not doing well.

“Now days these guys spend plenty of money on their own to make sure they have what it takes to keep those fish alive. What the anglers do in terms of adding oxygen, adding air and just using good fish handling procedures should be applauded,” said Wheatley.

Monsters on the Ohio promotes good fish care procedures by their rules too. If anglers bring in a dead fish they are disqualified. “That is another thing that we do that makes these guys want to keep the fish alive,” said Wheatley.

Wheatley credits his facilities for part of his success.

“I am blessed to have English Park for my venue,” offered Wheatley. “I have lots of room to handle 180 boats and it’s is still comfortable. You have to have the right circumstances. You gotta’ have the right amount of room.”