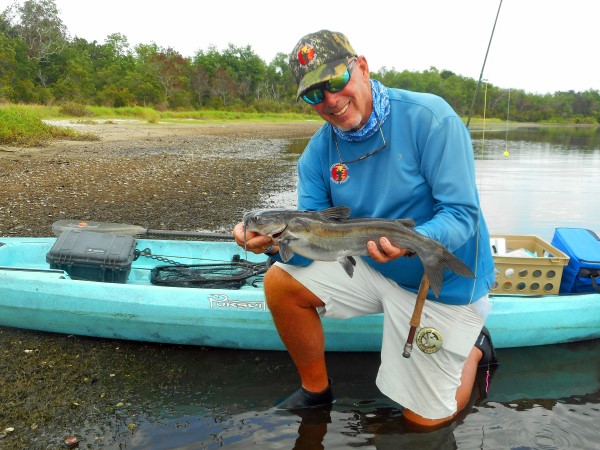 In a whiskered world where cut baits and stink baits prevail, you don’t hear much about fly rods or the associated lot of hooks and feathers that these angling instruments elegantly launch into the water. However, as American poet Carl Sandburg once said, “Nearly all the best things that came to me in life have been unexpected, unplanned by me.”

Fly anglers accustomed to pursuing freshwater game fish such as largemouth bass or bluegill might find themselves in agreement with Sandburg’s choice of words after landing their first channel catfish on fly. Channel cats aren’t often credited as a primary target in the fly fishing community; however, the feather-casting crowd is discovering that they can be surprisingly strong and worthy adversaries when taken on a fly rod.

This element of the unexpected is particularly relevant in peninsular Florida, where channel catfish don’t naturally reproduce, but are almost entirely a product of stocking efforts by the Florida Fish & Wildlife Conservation Commission (FWC). “Channel catfish are cavity nesters. They will not reproduce unless the male can get underneath or behind something in order to protect his blindside since he is responsible for guarding the nest,” said Rick Stout, FWC Richloam Hatchery Manager and Biological Administrator.

“Habitat that offers flowing water and areas where the eggs can be protected from sunlight is important,” he added. “There isn’t much in the way of natural spawning habitat for channel catfish south of Gainesville, so the fish have to be stocked,” commented Stout.

The life span of a channel catfish is about 20 to 25 years, so once they are established, populations can sustain for a long time if the conditions are conducive. “Stocked waterways often include places such as state parks or local ponds that frequently hold fishing derbies and bank fishing events for kids,” Stout added.

Despite this lack of natural spawning habitat, Florida freshwater fly anglers are growing increasingly fond of the rush that comes along with a take from a formidable channel cat in stocked waters. “These fish hit hard, are much stronger than you might think, and put up a tremendous fight. They are opportunistic feeders that feed on everything from insects to bream. If they sense something moving, they eat,” said avid fly angler and professional kayak guide Steve Gibson. “I’ve had them grab my fly and take me all the way into the backing,” he added.

Gibson guides clients on the Manatee River and Lake Manatee, near Bradenton in Southwest Florida, through his business Southern Drawl Kayak Fishing (941-284-3406). Most of the channel cats he and his clients catch run in the four to six pound range, but he says that catching fish in the double digits isn’t unheard of either.

In addition to the stable population of channel catfish in the Manatee River and Lake Manatee, Benderson Park Lake in Sarasota and Oscar Scherer State Park in Osprey are two additional FWC stocked spots in Southwest Florida where anglers can target the species on fly.

“Focus your efforts on outside bends and fallen trees,” advised Gibson. “Low light periods, such as dawn and dusk, tend to be the best times,” he added.

The fly patterns Gibson uses most often are two of his very own creations — the Myakka Minnow in copper with a chartreuse tail, and a #10 beadhead nymph that he refers to as Gibby’s Snymph or simple nymph. When fishing his Myakka Minnow pattern he uses a moderate retrieve with 6 to 8-inch strips, but works the Snymph beneath the surface using 1-inch strips and tiny twitches, along with the aid of a strike indicator.

In addition to these two subsurface flies, Gibson recommends keeping a topwater popper handy. “Channel cats will take topwater poppers on the surface, particularly during the late spring or early summer months. “When water levels are low, it’s a good time to cast out a popping bug. Just give it a pop or two, and then let it sit still for several seconds so that the legs can undulate,” he suggested. “I’ve caught plenty of channel cats on poppers this way.”

1. Medard Reservoir, Plant City – Ledges and flats within the main body of the reservoir are good places for fly anglers to try catching stocked channel catfish.

4. Lake Manatee State Park, Bradenton – Lake Manatee is ideal if you want to try fly fishing for channel catfish from a kayak during the winter or spring months.

5. Tenoroc Fish Management Area, Lakeland – You’ll find both reclaimed and unreclaimed lakes at Tenoroc that are well-stocked and offer plenty of shoreline access.

Because channel catfish are omnivores, they won’t pass up an opportunity to feed higher in the water column if the conditions are right.

Gibson is in good company when it comes to his level of enthusiasm for landing channel catfish on fly. Professional fly casting instructor and freshwater guide Joe Mahler (239-898-0263), is another Florida fan of the brawny channel cat.

“Channel catfish have somewhat similar habits to largemouth bass. They like to eat crayfish or minnows and are often found hanging out around brush piles,” commented Mahler. Which is why one of his recommended flies for channel catfish is Junior’s Craft Fur Minnow, a pattern created by fly tyer Junior Burke that mimics this type of forage.

Mahler recommends tying on a Craft Fur Minnow with a size 6 hook, and fishing the pattern slowly while dropping it between branches with short, exact casts. “Channel catfish aren’t skittish, so you can use that your advantage and make shorter, more precise casts,” he advised.

Aside from stocking your box with the right types of flies, be sure to gear up your tackle accordingly when planning to pursue this burly species. Mahler’s channel cat set up of choice is the Reilly Rod Crafters CK Series 6-weight medium action fly rod with either floating line for fishing slow moving streams and ponds, or an intermediate sink tip for swifter moving lakes or river.

“The CK Series 6-weight fly rod has the backbone you’ll need to get channel cats out of brush piles, along with the ability to load well on short casts,” advised Mahler. “Use 10 feet of 10 to 12-pound test fluorocarbon leader that will hold up around abrasive branches and structure,” he added.

Of course, when you do land your first Ictalurus punctatus on fly, you will want to be mindful of how you handle it. Both Mahler and Gibson show their clients how to properly grasp the species for photo opportunities so that they avoid a poke from the spines on the dorsal and pectoral fins. “It helps to use a landing net and a fish gripping tool,” Gibson recommended. “Given the potential size and strength of this species, a landing net is always a good thing to have along.”

Not convinced just yet? Pick up a 6-weight, head to a stocked Florida waterway, and get ready for the unexpected fun that comes along with reeling in whiskers on feathers.