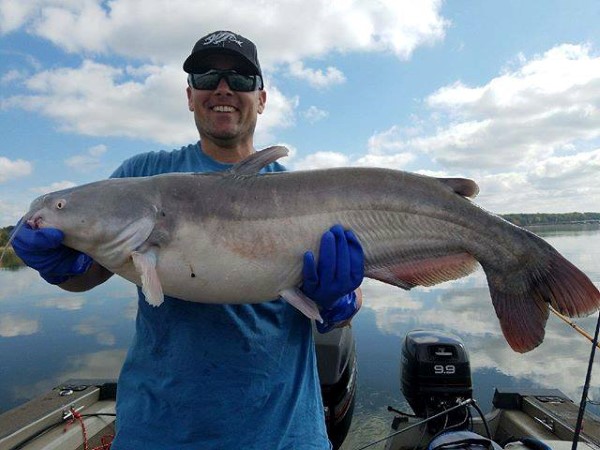 The blue catfish program of the Ohio Department of Natural Resources (ODNR) is based on stocking fingerling blue catfish at Hoover, Clendening, and Seneca lakes. Their goal is to provide trophy catfishing opportunities in Ohio reservoirs.

The ODNR Division of Wildlife started stocking yearling and fingerling blue catfish at Hoover Reservoir in 2011. Blue catfish are native to Ohio, but were not present in Hoover before this stocking.

Similar to their muskie program, blue catfish are produced in hatcheries at the Hebron and St. Mary’s state fish hatcheries. They are then stocked to provide a trophy catfishing opportunity that would otherwise not exist.

Given the success of the stockings at Hoover, Clendening and Seneca Reservoirs also recently started receiving annual blue catfish stockings. The most recent stocking occurred at Ohio’s Seneca Lake in September. The fingerlings came from St. Mary’s Fish Hatchery.

The blue catfish is identified as one of the largest species of freshwater fish in North America. Only the alligator gar and a few species of sturgeon get larger.

Trophy blue cats are projected in the stocked waters, because Ohio’s fish are protected by size and bag limits, and blue catfish will grow very quickly in the right environment. They are expected to reach trophy size in five to seven years.

“Blue catfish will grow very quickly in the right environment.”

The ODNR reports that fish stocked earlier this decade in Hoover are already approaching 35-40 inches. If anglers will practice catch and release methods, these blue catfish have the future potential to exceed 50 pounds and more.

CatfishNow believes that the success of this program in Ohio is evidence that similar programs could be successful in other states. Congratulations to Ohio for recognizing the potential of the blue catfish and taking steps to increase the stock. A large population of trophy blues in Ohio waters is bound to attract serious catfish anglers and the revenue that will follow.