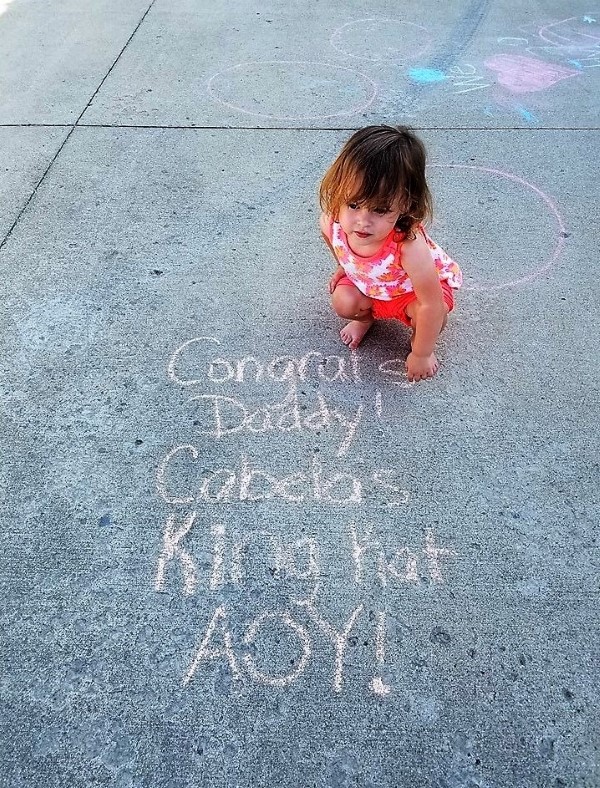 On the rope and loving it

If Chris Souders has his druthers, he fishes on the rope. He does it for a very good reason, he’s good at it. Like so many other avid catfish anglers his passion for catfishing comes from his youth.

“I love fishing because it is ever changing,” stated 35-year-old Souders. “Each day is a new challenge with new experiences. I believe that my passion for fishing evolved from positive fishing experiences as a child.”

“I live in a small village called Oak Hill, which is in Jackson county Ohio,” said Chris. “I actually live on the same property my grandparents lived on and my father was born and raised on.”

“Dad had to work every Saturday so when he would pick me up on Friday I would go spend the night and all day Saturday with my grandparents. I got to spend lots of time outdoors with my grandfather, hunting and fishing. After he passed away I was still too young to drive so I would walk a couple miles to Jackson Lake, after I got my work done around the house for grandma, and fish the rest of the day.”

“My grandfather was a huge influence,” recalled Souders. “I think it was his willingness to be patient with me and teach me fishing skills. As a young boy, like any child, I wasn’t able to set around patiently waiting for any length of time, but he was fine with that. If I wanted to kick rocks and play with sticks it was fine with him. If we caught fish great, but if we didn’t, hey that was OK too. I truly believe that attitude of just letting me be a kid, and just being there with me, is the reason I kept going and love it so much to this day.”

Chris also believes that what he learned from his grandfather and his father helped hone his catfishing skills. One thing in particular stands out to him.

“One thing that stands out to me from those early trips, more than anything is the importance of bait. Before he would go to the lake we would always go to the creek and get what grandpa Willie called big creek minnows. They were just creek chubs, but that lesson to always use fresh bait stuck with me. To this day it is one of the most important lessons anyone could learn.”

“…setting good examples for others.”

Speaking of lessons learned, Souders enjoys passing what he has learned on to others. He does so through his YouTube Channel, Slunger Cat Outdoors, at how-to seminars at various locations and through his social media sites.

“My specialty is catfish,” clarified Souders. “I have a love for the sport and a God given talent to enjoy it. I love to be out there anytime I can. But my expertise is anchor fishing. What I enjoy most, right now where I am in the sport, is teaching others how to catch these wonderful fish!”

The things he teaches others come from time on the water that included good days and bad days.

“I’ve had many great days on the water,” recalled Souders. “But one of the best times I’ve ever had on the water was with a coworker, that I’ve become good friends with, and his handicapped brother. They loved to fish and loved catfishing, but didn’t have the means to get out on the bigger rivers to fish.”

“We caught lots of great fish and made memories for all of us that will last a lifetime. We had a few doubles and some really good size fish. Neither of them had caught big catfish before so watching them have the opportunity to catch these fish just brought a great big smile to my face.”

“One of the biggest and most impressive things I remember about that day is the brother that was handicapped never complained about anything. Even though he was handicapped from the chest down, he was always upbeat, positive, and happy. It didn’t matter if it was a 2-pound fish or a 20-pound fish.”

What is a Slunger Cat?

Chris Souders’ nickname is Slunger Cat. That strange sounding word, “slunger,” has been floating around the Souders clan for a long time. As a nickname it came from a conversation Chris was having with friend about starting his YouTube channel.
“We had gone over a bunch of names,” offered Chris. “We were just brainstorming and got off track talking about big fish stories. I always called big fish slungers by instinct, because I had picked it up from my grandfather. I grew up hearing him call big fish and deer, slungers. For example, he would say, ‘That was one slunger of a buck that got killed.’”
“I really didn’t even realize I was saying it,” continued Chris. “As Harley and I were talking he said, ‘You know, I’m just going to start calling you Mr. Slunger Cat.’ The nickname stuck, and, I decided to use it as a YouTube channel name.”
When Chris looked the word up to see what it meant he found, “Slunger ─ An Appalachian noun describing a fish of very large dimension. That meaning definitely makes Slunger Cat and appropriate nickname for Chris and the perfect name for his YouTube channel.

Souders learns from adversity as much as by success. In what he describes as one of his worse days of fishing he learned to make decisions in favor of safety over fishing. He and his partner were fishing an Ohio Hills Catfish club tournament in early April.

“It was very cold,” recalled Souders. “We had just got 4 inches of snow. My partner Justin (aka Red) and I decided that since it was so early in the year, and with cold water temperatures, we were going to fish for blue cats.”

“We thought we knew just where they were. At blast off we headed straight downriver. When we turned the corner where the river widens out the wind had picked up creating huge white capping waves.”

“Instead of turning around and taking the safer option, we decided to continue another hour downriver. Fighting wind and waves coming over the back of the boat, we anchored up. After 30 minutes we had no action and decided to move.”

“Red started pulling the anchor,” continued Souders. “As he reached down to grab the anchor we took a big wave from the side. It flipped him over board and under the boat in 40-degree water without a life vest on.”

“Thankfully, as the boat rolled the other way he came back up alongside the boat. After what seemed to be hours, but was probably just a couple of minutes, we were able to get him in the boat and start getting dry clothes off me and on to him. Once we got back to the truck he was extremely red and cold. After a couple hours in the truck he started feeling his feet and hands again. It all ended up just fine, but that was scary.”

Souders learned an important lesson from that experience. “I am much more cautious on the river after that day,” Souders said.

Souders pulls no punches when talking about catfish conservation. He sees it starting with Catch-Photo-Release (CPR) and ending with catfish becoming a sportfish.

“My Philosophy on conservation starts with CPR,” declared Souders. “We anglers need to educate people about the importance of CPR and the impact it can have on the fishery. We must set high expectations of ourselves, so that we are setting good examples for others.”

“I also believe that catfish need to become a sportfish along with strict regulations. And not just on the catfish, but the baitfish they eat as well. We need to prevent over harvest of the bait fish to ensure that as the catfish fishery grows so will their food source.”

In addition to catfish conservation, Souders cites introducing our youth to the sport as a key element in the sport of catfishing. He says to make each trip with a child a trip they will remember. Be creative and let them have fun.

“Fishing with kids should be fun,” offered Souders. “Don’t worry so much about catching fish. Worry more about just making it a fun experience. If you happen to catch fish, well that makes it even better!”

On the tournament front Souders has been competing for 7 years. He obviously takes competitive fishing seriously, as witnessed by his back to back AOY crowns in 2016 and 2017 on the Cabela’s King Kat trail. He is a hardcore cat man, but considered a dependable and positive person by his fellow competitors.

Obviously, as a tournament angler he fishes for any catfish, but his competitors tend to think of him as a flathead specialist, and for good reason. They are his favorite to chase.

“I love the never quit fighting attitude of flatheads,” declared Souders. “To me flatheads are more of a challenge to catch because of the habitats they live in. You have to find the heaviest nastiest cover and either try to entice them to come out or go in after them. The challenge is addictive.”

On the personal front he just wants to be remembered as a great husband and father, and as someone who cares about others.

Given the success of his YouTube channel and personal appearances, most people would be surprised to learn that he has always had a phobia of talking in front of groups of people or on video.

Nevertheless, his future goals include growing his channel and continuing to teach other people how to fish and catch bigger fish.

His dream goal is to have the opportunity to become part of an outdoors TV channel, whether it be catfish specific or just outdoors in general.

Chris Souders is a seasoned catfish angler, an accomplished tournament angler and a dedicated family man. He credits his passion for fishing to his positive fishing experiences as a child and he strives to pass that passion on to future generations. He faces each new day as a challenge full of new experiences and things to learn.

“I’ve been addicted to fishing as long as I can remember” concluded Souders. “Some of my first and best memories come from a river bank while fishing. From time to time I still visit those same places I fished in my youth, but now I mainly fish big rivers such as the Ohio River, Tennessee River, James River, Mississippi River and the Cumberland River. I plan on fishing, and teaching others to fish, for as long as I’m able to.”