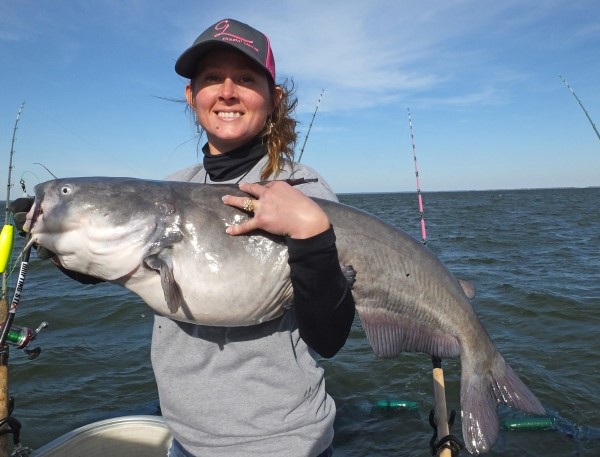 Was that wedding cake a catfish?

Layla Ledbetter grew up loving the outdoors. She fished extensively for bass and bream throughout her youth. But when she met a catfisherman named Jimmy Holbrook, about 10 years ago, she had no idea how her life, and journey into catfishing, would change over the next decade.

From a beginning of pond and occasionally lake fishing with her dad as a youngster, she’s morphed into a serious catfish angler and now is a fixture on multiple catfish tournament trails. She and Holbrook took their catfish team “Slime Time’ to the next level last October when they got married and she’s now Layla Holbrook. Her commitment to the sport was evidenced by her catfish themed wedding cake.

The 31-year-old from Gibson, Ga. works as a member service representative at a power company and also is the Children’s Minister at her church.

When talking about her passion for catfishing, she’s quick to elaborate on the thrill of hooking big catfish.

“I love the excitement of catching big fish, that’s a major attraction of catfishing,” she said. “It’s funny now, but the first time I went catfishing with Jimmy, I didn’t think he knew what he was doing. All my life fishing for bream and bass was about casting out and reeling in, then repeating the process. With catfishing we’d anchor, cast out and wait. Or, we’d rig multiple rods and drift and wait. It seemed strange, but I learned catfishing requires a different approach. Early on we enjoyed excellent fishing on a big lake and that got me really hooked on catfishing. And I learned pretty quickly that Jimmy really does know what’s he’s doing.”

Since those early trips, she became passionate about the sport and while still learning some of the finer points she developed some strong concepts about catfishing in general.

“I’ve learned to really appreciate the thought process that goes into finding fish and that’s crucial, as is the time and hard work required to set up and fish properly for consistent success,” Holbrook said.

“The more I fish and learn the more I want to know. I think that being adaptable in terms of fishing techniques for different lakes and times of the year is part of the learning process. Even fishing by day or night on the same lake can create opportunities to fish different ways to be successful.”

Holbrook said both drift fishing and anchor fishing are part of Team Slime Time’s fishing techniques. But knowing when and where for each method is the key to consistent success.

“I think it’s pretty close to 50/50 in terms of employing the drift or anchor fishing techniques,” she said. “The fishing patterns on a given day play a big role in how I like to fish. Essentially if fish are scattered over a large area, drift fishing is the best choice because we can cover a larger area effectively. When catfish are concentrated on specific targets such as humps, ledges or foraging in the shallow flats at night, the anchor setup will often produce best.”

She said some of her favorite catfishing time is at night when catfish move to the shallows.

“I love fishing the Santee Cooper lakes in South Carolina,” Layla said. “Although drift fishing by day can produce awesome results, one of my favorite ways to fish is to anchor up in shallow water at night. In one sense it’s relaxing, but it also gets really busy at times. Catfish seem to feed aggressively at night and we have a lot of success with this technique.”

Holbrook said that from April through September, they anchor fish a lot. From October through March, they are more likely to be drift fishing.

“The daily situation dictates what we’ll do,” she said. “Using electronics, we’ll get a pattern on the forage as well as the fish and make a decision based on that particular day on any specific lake. Baits can vary daily, from live bait, to bloody cut bait, depending on the species and conditions.”

Holbrook said the past several years have had her on a fast learning curve and while hooking big fish is a huge thrill, she’s learned to appreciate the times when multiple fish are hooked.

“One of our best weekends ever, in terms of catching fish, was a weekend when we caught 52 catfish,” she said. “The average weight was over 24-pounds. It’s hard to beat the powerful feeling you get from having a huge fish hooked up, but multiple fish in that size class is special too. I get really pumped up for catfish either way.”

Husband Jimmy Holbrook said that Layla may seem relaxed and calm on the outside, but when a rod slams three eyes deep into the water she shifts into overdrive.

“When a big blue catfish slams a rod she’s on it in heartbeat,” said Jimmy. “Her nickname is the ‘Rod Slammer Assassin’ and it’s totally true to her nature.”

Layla Holbrook said she enjoys all types of catfishing but probably enjoys catching blue catfish most because of their size.

“We’ve fished Clarks Hill Lake a lot in the past, especially several years ago because that’s closer to where we live,” she said. “But now our favorite lakes are the Santee Cooper lakes of Marion and Moultrie as well as Lake Wateree. It’s a smaller but highly productive lake in central South Carolina. All are full of big blue catfish.”

Her long-term goals are as diverse as the past ten years have been in terms of catfishing and life.

“In terms of catfishing probably my biggest thrill is catching huge catfish,” said Layla. “My current biggest fish is 52 pounds. One personal goal is to catch one that weighs more than I do. I’m not giving my exact weight, but a catfish in the 120-pound class would work out just fine for that.”

She and Jimmy have now taken competitive tournament fishing to a new level in their lives as well. Along with friends Chris and Mandy Gaines, they started a tournament of their own in 2017 dubbed the Santee Cooper Monster Cat Quest.

“We had a great first tournament with 77 teams representing 11 states,” she said. “The 2018 tournament is set for April 13-14, out of Blacks Camp on the Diversion Canal at Santee Cooper. We’re hoping to expand the tournament from last year. This is a real passion of ours right now. We want to make it the best event we can. With this event our involvement in tournament fishing is taking a new course.”

At 31 years of age, Holbrook said she is excited about what the future holds both in catfishing and her personal life.

“With recently getting married, fishing with friends and relatives, fishing the tournaments and now having a tournament we host, a lot is going on,” she said. “But I tend to think the best is yet to come.”

“My religious faith is strong,” concluded Layla. “I have felt for a long time one calling for me would be to do mission work. But I also believe I’m doing what the Lord wants me to right now. So, I’m enjoying now and looking forward to the future.”

The journey to becoming a serious tournament catfishing competitor was a natural inclination for Layla Holbrook. It stemmed largely from playing various sports in her youth and some pretty good success in their first tournament.
“I grew up playing baseball and other competitive sports and I’ve always had that competitive edge,” she said. “Taking catfishing from a recreational opportunity to tournament fishing was really an easy choice. I caught a 43-pound fish the first tournament Jimmy and I fished together. He had a 38-pounder and with our other fish we finished in 9th place. So yeah, we got into tournament fishing seriously after that.”
She said they’ve enjoyed considerable success since that time and while fishing catfish tournaments is fun and fuels her competitive spirit, it’s much more than just the competition that makes it enjoyable.
“To a large extent it’s the people we’ve met and friends we’ve made,” she said. “Certainly, when in a tournament competition, everyone is doing their best to win, but at the end of the day we’re friends and fellow fishermen. I really enjoy the fellowship with other catfishermen and we’ve made some great friends along the way over the past several years. So it’s really a great opportunity on both the competitive and personal levels.”