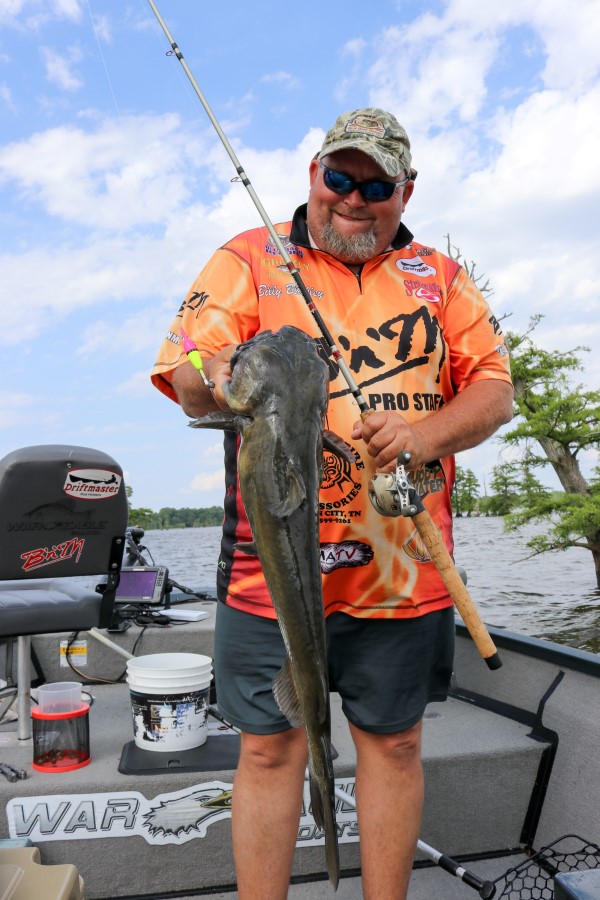 Catfish favor the bottom. It’s that simple. Exceptions exist, of course. For example, blue cats sometimes suspend below schools of open-water baitfish. Most catfish life occurs near the bottom, though, so the typical catfish angler doesn’t give floats (bobbers, if you prefer) much thought. That said, in some situations, utilizing the right float can significantly improve your opportunity to present a bait where it needs to be.

We’ve chosen a few specific applications of floats for catfishing, with each quite different from the others. Consider, of course, if any fit the ways you prefer to fish. Don’t stop there, though. Also consider the thought process behind each application and whether there are other situations where using a float could similarly help you present offerings more efficiently.

“The bottom is covered with stumps and downed trees,” Billy Blakley said as an explanation of why a float is always part of his catfishing rig at Reelfoot Lake. Blakley, who is the head guide at Blue Bank Resort (bluebankresort.com), has fished Tennessee’s “earthquake lake” all his life, so he knows what it takes to effectively present offerings to Reelfoot’s plentiful cats.

Blakley fishes two main types of area for Reelfoot channel catfish: stump flats that are littered with downed trees and live cypress stands. In both cases, he needs his bait (usually a nightcrawler) close to the snaggy bottom, where the catfish reside, but not on it. Without a float, he’d spend more time retying than fishing and would rarely keep a bait in place long enough for a cat to find it before hanging in the wood.

“Without a float, he’d spend more time retying than fishing and would rarely keep a bait in place long enough for a cat to find it before hanging in the wood.”

Blakley uses slip corks because he typically wants his bait suspended 3 to 6 feet deep, and a slip-float rig is far easier to cast than a spring float set for that depth range. Thill Crappie Corks work well for this task because each is rated for the weight it is designed to suspend, with the rating printed on every float, so it’s easy to grab the right float based on the amount of weight needed to keep your offering in place.

Blakley slides a knot-style bobber stop on the line first, and then the float, and then completes his rig with one or two large split shot and hook. With that rig he can control the depth of his offering simply by sliding the stopper up and down the line.

“If you aren’t getting bit, try fishing a little bit deeper,” Blakley said. “If you keep getting hung, you might need to go a little shallower.”

When the cats nibble and the float just dances a bit, Blakley remains patient. When the float shoots under, though, he usually sets the hook quickly and starts reeling to keep the fish from digging into the cover.

As odd as it might sound, veteran anglers on South Carolina’s Santee Cooper Lakes virtually always use a float on each line when they drift and drag bait rigs along the bottom, often 20 to 40 feet beneath the surface.

“You want your rig on the bottom, but you want the hook itself off the bottom because there are a lot of snags down there,” explained Kevin Davis, owner and operator of Black’s Camp (blackscamp.com) on Lake Moultrie and a veteran Santee Cooper guide.

Beyond sparing countless snags, elevating that bait just a foot or two off the bottom creates a bit more visibility and puts the bait at eye level to the most active cats. It also allows more scent to dissipate so catfish can follow their whiskers to the source of the aroma.

Santee Cooper catfishermen find blue cats in the open waters of 60,000-acre Lake Moultrie by making long drifts that cross ditches and channels and go up gentle slope and down into valleys. They put out a lot of line to keep the rig dragging smoothly, following the bottom’s contours. The float, which is normally a simple cork cigar float, is strung onto the leader between the weight and the hook and pegged a foot or so from baited hook. The weight must be heavy enough to drag bottom, even with the float on the line.

The strategies and full set-up for Santee-style drifting are too much to properly tackle here. However, a float strung onto the leader is a critical element for presenting baits effectively and catching catfish with this technique. The same type of float has similar virtues for bottom bumping in craggy tailwaters and for various other situations that involve dragging a rig across the bottom.

Flathead catfish typically prefer offerings suspended a foot or two off the bottom over those lying flat on the bottom. Sometimes you can suspend a big bait simply positioning the boat directly over the fish and using a weighted down-line. At times, though, setting up atop the cats won’t work because a likelihood of spooking fish or current and cover that make it tough to position a boat properly. That’s when a pole float comes into play. The same pole floats also work well for shore fishing for flatheads and for suspending baits both above and below a dropoff. By positioning a boat over the deep side of a drop, you can fish down lines below the boat and cast lines rigged with pole floats over the top of the drop.

Pole floats are large pole-shaped slip floats, normally 6- to 12 inches in length, that are designed to hold up a lot of weight. They sit upright in the water, offering high visibility, and aren’t affected by normal tugs of baitfish. When a pole float darts out of sight, good things are happening at the business end. Some pole floats are end-weighted, enhancing castabality. Some, like the Little Joe Nite Brite Pole Float, are lit at the top end for visibility at night.

A pole float is sort of like a walleye fisherman’s slip cork rig on steroids. Rigging begins with a bobber stop and the float itself rigged on the main line. Next comes an egg sinker, which could range from ¼-ounce to a few ounces, depending on water depth and current, a bead to protect the knot and a heavy barrel swivel. A heavy leader of 15 to 18 inches and a stout hook that’s large enough match whatever kind of live bait you plan to use complete the rig.

You do have to know the approximate depth of where you want to place your offering in order to set the bobber stop so it will suspend the bait a couple of feet off the bottom. Once the depth is set, simply cast to where you want your bait suspended. If there’s current or significant wind you need to be upstream of the position where you want to place your bait. In fact, given the somewhat cumbersome nature of a rig that includes a pole float, a big weight and a big bait, allowing the rig to drift into place is sometimes easier than casting.

Once the rig is place, it’s just like watching a bobber for bluegill, except that when the float darts out of sight, the fish at the other end might weigh 50 pounds!